Dems set to reform rules on superdelegates that aided Clinton 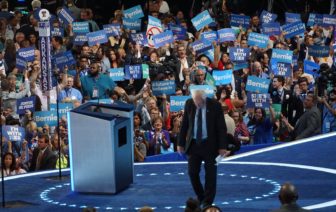 Bernie Sanders exits the stage after endorsing Hillary Clinton at the Democratic National Convention Monday. His supporters want to change the superdelegate system that gave Clinton a big advantage in seeking the nomination.

Philadelphia – As Hillary Clinton accepts her party’s nomination Thursday evening, the future of hundreds of “superdelegates” who helped her become her party’s presidential candidate remains in doubt.

An attempt by supporters of Sen. Bernie Sanders to eliminate Democratic superdelegates, unelected party elites who make up 15 percent of the delegates to the Democratic National Convention, failed this week.

But supporters of both Sanders and Clinton agreed to a compromise to create a “unity commission” that will revise the rules surrounding the nomination process, including the role of superdelegates.

Sixteen of the 71 Connecticut convention delegates are superdelegates. They include all members of the Connecticut congressional delegation, state party leaders and other party elites, such as former Sen. Chris Dodd.

Unlike the other Connecticut delegates here, they were not allocated by the results of Connecticut’s presidential primary election, which gave 28 delegates to Clinton and 27 to Sanders.

Instead they are all “unpledged” and could have supported any candidate. All 16 supported Clinton.

The Republican Party has only 298 superdelegates – limited to each state’s party chair and two members of the Republican National Committee. Unlike the Democratic superdelegates, who are free to back whomever they like, Republican delegates are bound to support the winner of their party’s primaries or caucuses.

The tendency of superdelegates to back an establishment candidate is what riled Sanders and his supporters, who say the system is “undemocratic.”

Opponents of altering the superdelegate system say it gives the party a greater diversity of voices.

“I enthusiastically support reforming the superdelegate system to further empower primary voters to make the ultimate decision about who the party’s nominee will be. These changes are long overdue,” he said.

Former Rep. Barbara Kennelly, whose father John Bailey dominated Connecticut politics for years and once headed the Democratic National Committee, said there is a need to change the system, but not in the way Sanders wants.

“But (reform) will be done,” Kennelly said.

Sen. Chris Murphy, another Connecticut superdelegate, said he would support a move to eliminate all of them.

He said he’s in an “awkward position” to be unbound and “asked to follow my conscience, even if it’s not the choice of my state’s primary voters.’”

Murphy said any Democratic party reforms should also scrutinize the role of caucuses, which are used in many states instead of primaries to distribute delegates. Caucuses tend to attract party activists but are not attended by other Democrats, who can’t afford to take the time.

“If we want a reform of our primaries, then we should focus on the caucuses, too,” he said.