From foster care to Philly, a delegate finds his voice 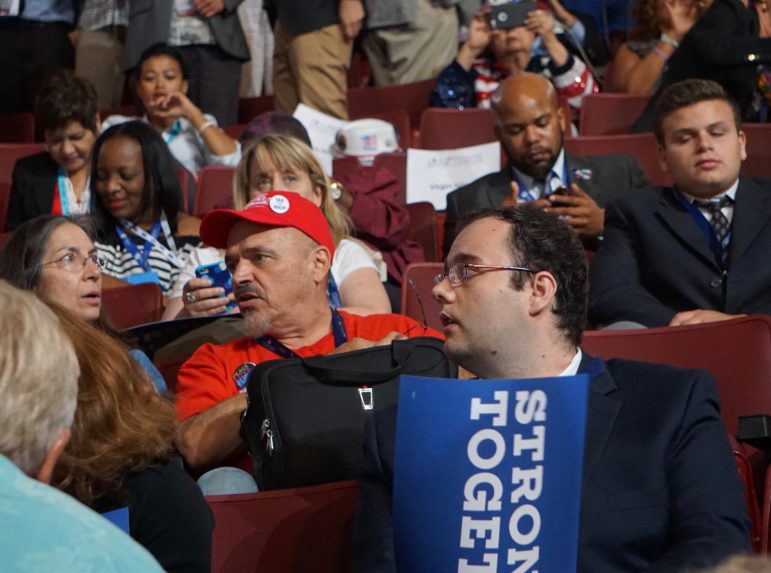 Robert Berriault, holding a sign that says, “Stronger Together.” At left are Sanders delegates Debra Cohen and Dan Durso.

Philadelphia — Robert Berriault is the 27-year-old Bernie Sanders delegate from Connecticut who arrives early at the Democratic National Convention every day in a dark suit, white shirt and necktie. No Bernie hipster stuff, no funny T-shirts. But he’s got a story.

If you sit next to him on one of the shuttle buses to the Wells Fargo Center, where the chatter is constant, befitting an event that naturally draws the extroverted, he probably won’t get around to telling it. Eye contact is an issue. So is socializing.

It is a form of autism that can make him seem aloof, a little rigid. But Berriault will speak about Sanders. Before the convention, he went to Debra Hauser’s house in Clinton and represented the campaign at a unity event attended by 125 people. He spoke Wednesday at a strategy meeting here about what should come next for a finished Sanders campaign that wants to be a movement.

There, he told them about the Asperger’s, an admission that helps if he misses social cues and goes on. He wants people to know he’s not insensitive. He understands what is empathy, even if it does not come intuitively.

“I’m like, I’m a smart person. I’m good with my academics, the same things I’ve always been good at,” said Berriault, a second-year student at Western New England Law School. “But the social aspect, it’s tough, a lot of politics is social, being around people day and night, especially at the convention. I mean, there is a lot of noise, so many things going on at once, so it really is overwhelming.”

Asperger’s is only part of his story.

The only clue that it is difficult for him to tell it is that his eyes dart from his interviewer to a tabletop in the lobby of the airport hotel that houses the Connecticut delegation, a sign that he is nervous. He bangs out the pertinent facts in unadorned declarative sentences.

He was born in Rockville, the old industrial section of Vernon, the Hartford suburb that is home to U.S. Rep. Joe Courtney, who is here as a superdelegate committed to Hillary Clinton.

His parents didn’t want him.

His grandmother took him. 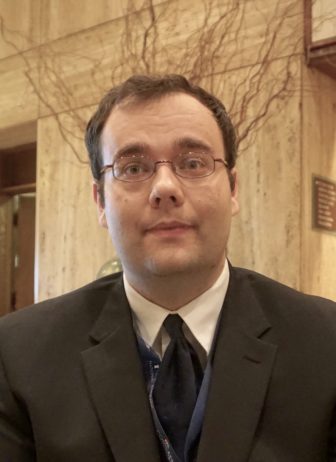 “I grew up in five foster homes and two group homes,” he said. “And I grew up, you know, in poverty. I grew up on food stamps and Social Security. It was always a struggle.”

That’s how he came to volunteer for Sanders.

“The point I want to make is that’s the reason why I supported Bernie Sanders in the primary. He spoke about income inequality. He spoke about lifting people out of poverty,” Berriault said. “He’s the first progressive who ever ran for president in my lifetime.”

He organized Central CT for Bernie, focusing on five towns. Sanders won four of the five.

Democrats in New Britain, where he lives, helped raise money for his trip to Philadelphia with a pizza fundraiser to offset a $1,500 hotel cost, plus transportation and food. Money also came in through a GoFundMe page, “Help Bobby B get to Dem Convention.”

Berriault said he sees no empathy in Donald J. Trump, the billionaire Republican nominee. He sees anger at beneficiaries of public assistance.

“This is one of the first times I’ve ever told my personal story,” he said. “I’m willing to do it now after seeing the Republican convention. I mean, they want people to believe the only people who take benefits are people who are lazy, who aren’t wiling to do anything to better themselves, and that’s simply not the case. I mean, I for one, I had to take food stamps. I had to take Social Security growing up. I mean, I didn’t have a family.”

It bothers him, the attention that Trump can command with a single provocative Tweet.

“We focus so much on that,” he said. “And we don’t focus enough on the actual issues that really matter to everyday Americans like myself.”

Aside from politics and law school, he works on social skills. A therapist helped. He tries to read people. On Wednesday night, other delegates said, they saw Berriault give up his prime seat, the one he got by showing up early. It went to another Sanders delegate, a woman trying hold a protest sign.

Until Berriault moved, she was not visible.

Like most of the Sanders delegates from Connecticut, Berriault is not a believer in Bernie or Bust.

“I do support the nominee, Hillary Clinton. I mean, it kind of stinks the Bernie Sanders campaign lost,” he said. “But at the same time, Hillary Clinton is a great candidate, the most qualified in history. And she’s going to make a great president.”

Berriault already has arranged to do field work for her campaign. If you live in New Britain, you may be hearing from him.