Malloy: ‘I have not’ received a subpoena in federal investigation 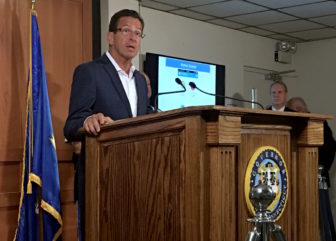 Gov. Dannel P. Malloy said Tuesday he has not received a subpoena to testify in a federal investigation into the Connecticut Democratic Party’s fundraising efforts during the 2014 elections.

When asked during a press conference at the State Armory Tuesday morning if he had been subpoenaed, Malloy said, “I have not.”

“I’m not spending time on it,” Malloy told reporters. “I’m doing my job. I certainly understand that people have the right to look at whatever they want to look at, and to understand, you know, what transpired.”

The U.S. attorney’s office is investigating whether the governor and the state Democratic Party broke the law when soliciting donations from state contractors during Malloy’s 2014 re-election bid.

Malloy said he wanted to refrain from making comments on the investigation, but said he thinks “it looks a lot like the same process” state investigators used when examining the contributions. He said that process ended with “a positive result.”

The state Democratic Party was able to settle that dispute, with the State Election Enforcement Commission, without admitting any wrongdoing but paying a record fine of $325,000.

Malloy also said he has not obtained private counsel.

“I’m not going to be pulled into a regular ongoing discussion on this stuff,” Malloy said. “I think people have a right to take a look. They’re taking a look. We’ll see where that goes. It’s the party, and we’ll see where it ends.”