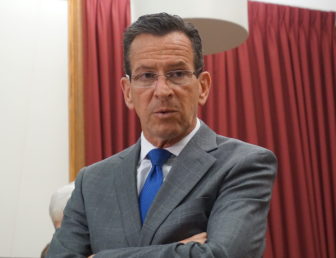 A federal grand jury with the power to subpoena documents and compel testimony is trying to do what state elections regulators could not: Resolve whether the Connecticut Democratic Party and Gov. Dannel P. Malloy broke the law in soliciting contributions from state contractors for his re-election in 2014.

The federal investigation is a major political complication for Malloy at time when he is in the spotlight as chairman of the Democratic Governors Association and a campaign surrogate for Hillary Clinton. She will become the first woman to win a major-party nomination for president next week at the Democratic National Convention, where Malloy is expected to speak.

It comes after a thinly veiled public appeal by Charles Urso, a retired elections investigator and FBI agent, for a deeper look at how Malloy accepted $6.5 million in public financing, which required him to sign an affidavit promising to abide by spending restrictions and contribution of no more than $100, and also benefitted from state contractor contributions of up to $10,000 to the state party.

Citing unnamed sources, The Hartford Courant first reported the existence of the criminal investigation Friday and the issuance of subpoenas. Thomas Carson, spokesman for the U.S. Attorney’s Office, declined to comment, but the state Democratic Party acknowledged the investigation and pledged cooperation.

Can Connecticut’s campaign reforms be saved?

“In regard to recent action by federal authorities, we have advised authorities of our intent to cooperate and will continue to do so in order to bring this to a close and continue to do the work of our party to elect Democrats on all levels,” said Leigh Appleby, a party spokesman.

“I think it is absolutely laughable that the Democrats are claiming they followed the law,” said J.R. Romano, the GOP state chairman. “They were fined for not following the law. The Democrats believe they are in a political class where the rules don’t apply.”

The Connecticut Democrats agreed in mid-June to pay a record $325,000 over 27 months to resolve a State Elections Enforcement Commission investigation of a complaint filed in 2014 by Romano’s predecessor, Jerry Labriola.

Michael J. Brandi, SEEC’s general counsel and executive director, called the payment “a significant penalty,” but the party admitted no wrongdoing and the settlement characterized the $325,000 as “a voluntary payment,” one roughly equivalent to the value of a disputed mailing paid for out of the party’s federal campaign account and promoting Malloy.

His office had no comment, other than to say it would cooperate with the federal investigation. At the time of the settlement, the commission and the Democrats were fighting in Superior Court over a motion by the attorney general’s office to compel the party to produce documents that would have shed light on campaign solicitations.

In a commentary piece published by CT Mirror’s option page, CT Viewpoints, Urso called the settlement a “mockery and a sham.”

“The settlement was made without allowing SEEC the ability to conduct a reasonable investigation. Despite public pronouncements of cooperation, they made a mockery of the investigation,” Urso wrote. “In response to SEEC requests, they only provided 300 pages of evidence before they refused to cooperate including ability to interview witnesses. The last time I investigated a Governor, I reviewed hundreds of thousands of documents.”

Urso played a lead role as an FBI agent in a bid-rigging investigation that contributed to Republican Gov. John G. Rowland’s resignation in 2004 and passage in 2005 of a ban on state contractor contributions to state elections and the creation of the voluntary system of public financing of campaigns.

Rowland pleaded guilty to corruption and was sentenced to one year and one day in prison.

Appleby said Friday that party officials have “fully complied with both state and federal laws throughout the 2014 cycle and continue to do so.”

“We believe this agreement provides a sound framework for dealing with the conflict between state and federal campaign finance laws, and also strengthened a campaign finance system in which both parties operate,” he said.

Malloy spokesman Devon Puglia could not be reached for comment early Friday afternoon. Puglia had not commented when the settlement with SEEC was reached in mid-June, calling it “a party matter.”

A central issue raised in the complaint was the conflict between state and federal campaign finance law: Connecticut bars state contractors from donating to state campaigns, while federal law dictates the rules for raising and spending money that is used for get-out-the-vote efforts in federal election years, when state elections are also held. Contractors can give to federal races and to the party’s federal account.

Labriola complained that Malloy and the Democratic Party were subverting the voluntary public financing program, which requires participants to abide by limits on spending and accept contributions of no more than $100.

Essentially, candidates, campaigns and political parties operate under two sets of contradictory campaign financing rules: one provides public financing to candidates who agree to accept donations of no more than $100 and abide by spending limits that vary by office; the other allows state parties to accept maximum donations of $10,000 a year and spend unlimited amounts supporting their candidates.

Malloy benefitted from both systems. The governor  and party officials have declined to talk about how they targeted companies who do business with the state for campaign contributions.

Malloy was Connecticut’s first governor to use public financing. He defeated self-funded opponents who outspent him in the Democratic primary and general election in 2010. He was re-elected in 2014 with $6.5 million in public financing –and the support of a party that financed a sophisticated get-out-the-vote machine with funds Malloy helped attract, beginning with more than $1.5 million in 2013. That was triple what the Democratic Party had collected four years earlier in the run-up to the 2010 election, when it did not control the governor’s office.

The Democrats claimed that not only did federal law permit the use of the federal account to pay for get-out-the-vote efforts that benefitted Malloy, but that the federal law required it.

The Democrats were fighting an investigative subpoena issued by the commission for emails, bank records and other documents, arguing that federal campaign law pre-empts the investigation. At the time of the proposed settlement, a Superior Court judge was poised to rule on the commission’s motion to compel the party to abide by the demand for documents.

The dispute began over an obscure mailing late in the 2014 gubernatorial campaign, but it quickly escalated into a legal battle with potentially dire consequences for Malloy, the state party and the authority of the commission. While the mailers initiated the complaint, the case also was believed to involve larger expenditures on staff as well. 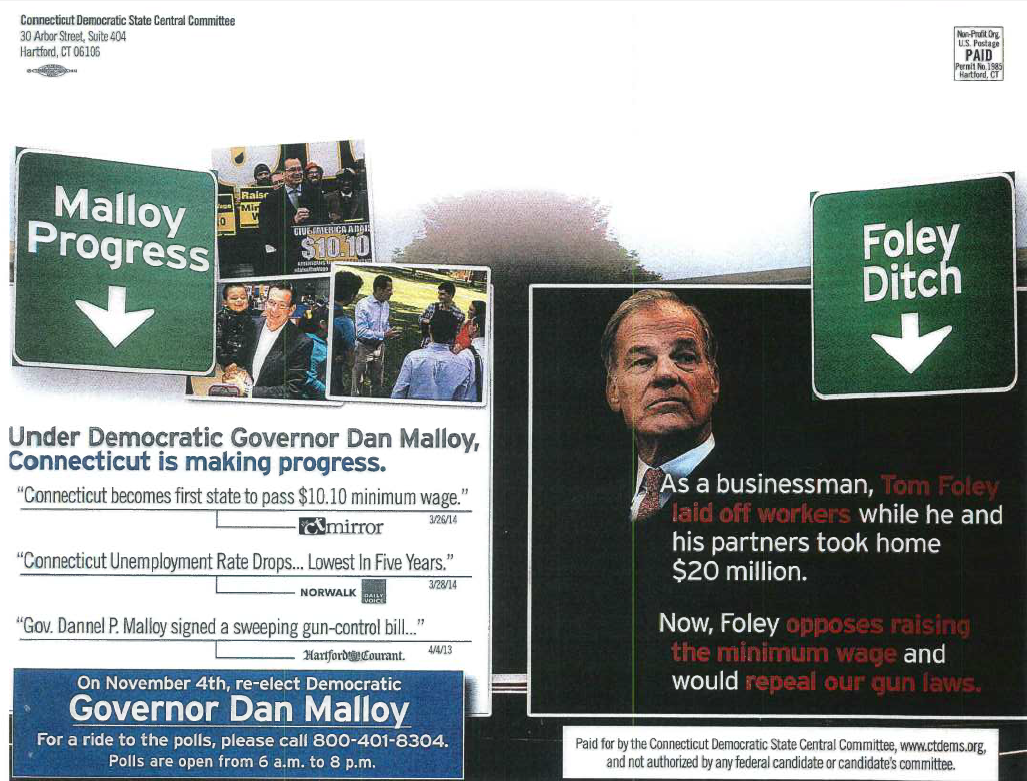 One of the mailers that kicked off an investigation into Democratic Party fund-raising for the 2014 election.