Updated at 3:25 p.m. with comments from a Democratic press conference.

Washington – Donald Trump’s plans to hold a rally in Connecticut this weekend will rev up the campaign season in Connecticut, sharpening the state’s focus on the race for the White House.

Connecticut is not a swing state, having last voted for a Republican in 1988 for former state resident George H. W. Bush. But both parties say spending time and resources in Connecticut will help their presidential candidates in what’s become a bruising national fight.

J.R. Romano, the head of the Connecticut Republican Party, said Trump’s visit to Sacred Heart University in Fairfield on Saturday is aimed at linking Gov. Dannel P. Malloy’s “failed” economic policies to those of Hillary Clinton. 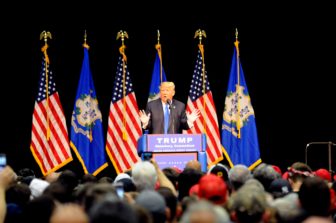 Donald Trump speaks at a rally at Crosby High School in Waterbury in April.

“The state of Connecticut is the biggest warning of what Hillary Clinton economic policies will look like,” Romano said.

Connecticut Democrats used a midday press conference Friday to challenge Republican candidates in the state to repudiate Trump, and they made clear they would press the issue during the campaign.

Calling it a “crisis for the Republican Party,” Hartford Mayor Luke Bronin said it was time for Republicans to “stand up and let their voices be counted.”

“If they stay silent, they are backing Donald Trump,” said state Rep. Matt Lesser of Middletown, one of several Democratic legislators to speak.

Meanwhile, a Clinton campaign official said Connecticut’s proximity to other battleground states, including New Hampshire and Pennsylvania, and the possibility to tap young supporters and union loyalists to help in other places makes the state an asset.

“Volunteers from Connecticut can go to other (swing) states if we need them,” she said.

The Clinton campaign official said the former first lady and secretary of state is committed to a “50 state campaign” with a presence in each one.

She also said there are political synergies in the state, with the Clinton campaign benefiting from the races of popular Democrats running for re-election, like Sen. Richard Blumenthal, who in turn could be helped by Clinton’s name at the top of the ballot.

“We already have our top surrogates on the ground,” said Michael Mandell, executive director of the Connecticut Democratic Party, referring to members of the state’s all-Democratic congressional delegation.

Setting up the campaigns

The  Clinton-Trump battle for the White House began in earnest in Connecticut right after the parties held their conventions in Cleveland and Philadelphia last month.

The Trump campaign picked Stratford attorney Ben Proto to head its efforts in the state. Proto is no political novice, having worked in Connecticut on Sen. John McCain’s presidential campaign and volunteered in New Hampshire on former Massachusetts Gov. Mitt Romney’s campaign.

Heading up the Clinton campaign in Connecticut is Tommy Hyde, who has worked as a Democratic field director in the state and been involved in local campaigns.

Both the Trump and Clinton campaigns said they are scouting for locations to open campaign offices and say those will be up and running soon.

The Trump campaign’s effort to win Connecticut’s 7 electoral votes is part of a plan to expand the electoral map by competing in states like New York, Oregon, Washington and Michigan that Republicans have not carried for decades.

This strategy was fashioned by campaign manager and New Britain native Paul Manafort before Trump began to slip in the polls, even in rock-ribbed GOP states like Georgia and Arizona and in the swing states of Ohio, Pennsylvania and Florida.

The slide in the polls has been linked to a series of post-convention missteps by Trump, including feuding with top Republicans and with the parents of a slain Muslim-American soldier, and a comment about gun enthusiasts that was widely interpreted as a threat against Clinton or a joke gone bad.

The Trump campaign is pressed to reallocate more resources to right its campaign in those states, even as it spends time and money visiting Connecticut on Saturday. 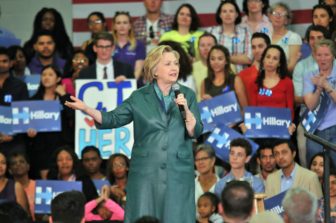 Hillary Clinton speaks at a rally at the University of Bridgeport in April.

Gary Rose, head of Sacred Heart University’s political science department said he will be among those at the rally.

He said it makes sense for Trump to visit the state because “there’s a very restless electorate here willing to give him a look.”

Rose said Connecticut’s weak economy makes it fertile territory for an outsider candidate like Trump who appeals to disaffected working-class and independent voters.

But, unlike other politicians who have used Connecticut as a campaign cash machine, Trump has raised very little money in the state.

The latest Federal Elections Commission reports show that as of June 30, Clinton had raised more than $4 million in the state while Trump had raised little more than $132,000.

Rose said Trump’s visit to Connecticut, even if it’s not linked to a fundraiser, could provide him an opportunity to meet some new, deep-pocketed donors.

Meanwhile, Clinton has scheduled a fundraiser in Fairfield County on Monday, but no public events.

Rose said her campaign should focus on the state’s Democratic base, which includes union members and a Hispanic population that is growing, especially in the state’s larger cities, like Hartford and Bridgeport.

“She needs to have an urban message and show her support for the unions,” Rose said.