The Republicans’ favorite issue in Connecticut is Malloy 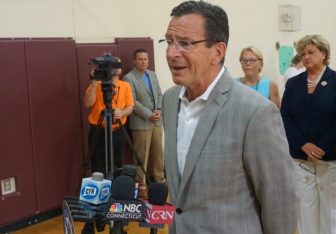 East Hartford — From Donald J. Trump to Republican candidates for the General Assembly, Gov. Dannel P. Malloy is repeatedly reminded that the GOP sees him as a potent campaign issue in 2016, even if the two-term Democratic governor is not on the ballot this fall and probably won’t ever seek elective office again.

Malloy was forced into campaign mode Monday to defend his record against personal attacks from Trump over the weekend, while House Minority Leader Themis Klarides, R-Derby, accused Democrats of using Trump to divert attention from their support for Malloy’s fiscal policies, including two major tax increases.

“They are smart enough to know they want to stay as far away from him as possible,” Klarides said.

Malloy, who spoke to reporters after an event here promoting a summer meal program for students, said he was comfortable discussing his record, more so than GOP officials are talking about their presidential nominee and his penchant for going off message with asides or Tweets that keep questions about his fitness in the news.

Trump began his rally Saturday night at Sacred Heart University in Fairfield with a long denunciation of the governor and the decision by General Electric to relocate its headquarters from suburban Fairfield to Boston, part of the corporation’s rebranding as a digital company. He mocked the governor’s first name.

“You gotta worry about somebody running for president who does that, don’t you?” Malloy said. “I mean, he’s a fraud. Donald Trump is an out-and-out fraud. Let’s start with the fact he won’t release his tax returns. He’s running for the highest office in the land. He said he’d release his tax returns. He acknowledged that was necessary to run for president, and he won’t, probably because the only person who’s ever made money with Donald Trump after all his bankruptcies is Donald Trump. He’s a fraud, that’s what he is. He’s also a clown.”

Malloy, who has seen his job approval rating drop to 24 percent as he struggles with a continuing fiscal crisis, said he will defend his record as a governor who took office while the state was struggling with the aftermath of the Great Recession of 2008.

“We’ve seen the creation of over 100,000 jobs since I became governor. We’ve seen dramatic changes in our educational systems across the state since I’ve become governor. We’re a healthier state,” Malloy said. “We’re a safer state, experiencing our lowest crime rate in 48 years, and we’re awaiting additional data, which will demonstrate crime went down yet again. We’re investing money in infrastructure, particularly on our highways, bridges and mass transit situations. So I’m pretty proud of the record, and we ll continue producing on that record.”

But in the competitive Naugatuck Valley’s 105th House District of Rep. Theresa W. Conroy, D-Seymour, the incumbent’s newsletter to constituents emphasized her opposition to Malloy’s cuts for local hospitals and the funding the legislature restored for six smaller independent hospitals, including Griffin Hospital in Derby.

“I stood up against him on the hospitals,” Conroy said Monday.

Conroy’s opponent is Klarides’ sister, Nicole Klarides-Ditria. The state’s largest business group, the Connecticut Business and Industry Association, already has targeted the district for independent expenditures aimed at flipping control of the Senate to Republicans and, at a minimum, narrowing the Democratic advantage in the House.

With a history of close races, the 105th is an attractive target for outside spending.

Trump seems strong in the valley, as she was recently reminded when she asked a supporter to display a lawn sign. The person agreed, but warned: “I hope you don’t mind, it’s going to be next to a Trump sign.”

On Saturday, Trump blamed Malloy for losing General Electric, an issue that Republicans plan to use in legislative races, making the case that a Republican legislature is needed as a counter to the Democratic governor.

GE made clear that it no longer was interested in its 1970s-era suburban campus, saying it wanted an urban area more attractive to a younger, tech-savvy workforce. Had GE stayed in Connecticut, it likely would have sought an expensive relocation package for a move to Stamford or New Haven. The $250 billion company is getting more than $145 million in state and local aid for the move to Boston,

“If I spent $162 million — because that s the total price tag — that GE is getting out of the hide of Boston and the Commonwealth of Massachusetts, if I had spent $162 million to get 200 jobs, the howling would not have stopped these many months later,” Malloy said. “That’s just the reality.”

Klarides said Malloy has not hesitated in the past to offer major economic-development packages to corporations already in Connecticut. Like many Republicans, she also challenges the notion that GE would have looked elsewhere had its top management been happier with the economic climate in Connecticut.

The election for the General Assembly is far more likely to be a referendum on Malloy and the Democratic legislature than on Trump, she said. The appetite for change is strong, she said.

“People are more disgusted and pissed off at elected officials in the last two years than I’ve aver seen it. That’s why the allure of a Trump or a Bernie Sanders is so great now. They are perceived as the outsiders,” Klarides said. “That’s why the Democrats in Connecticut are petrified.”