Malloy, Cuomo face off over dumping in Long Island Sound

Washington – New York officials say a plan to dump dredged material in eastern  Long Island Sound is potentially harmful to the ecology and tourism, but Connecticut supporters say it’s key to the state’s economic development and to keeping Naval Submarine Base New London off a base closure list.

A feud between Gov. Dannel Malloy and New York Gov. Andrew Cuomo centers on an Environmental Protection Agency and Army Corps of Engineers proposal to keep open a 1.5-square-mile dump site located between the mouth of the Thames River and the southeastern tip of Fishers Island. 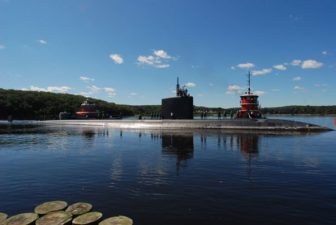 The debate now centers on the remaining site.

At a press conference in New London on Wednesday, Malloy said the dumping could be handled in “an environmentally friendly way.”

Malloy and other supporters of the plan say maritime activities generate $4.8 billion in economic output and over 30,000 jobs in eastern Connecticut. They say without access to a nearby placement site, eastern Connecticut dredging projects would face increased and often prohibitive costs from transporting materials to sites at further distances, as well as increased risks to the environment from spills and increased emissions.

But Cuomo said he will sue the EPA if it moves forward with its plan. The agency is reviewing public comments on its proposal and has not made a final determination.

“The Long Island Sound is one of New York’s greatest natural treasures and a vital component of Long Island’s tourism industry,” Cuomo said at a press conference earlier this month. “The EPA’s plan to establish a new disposal site not only poses a major threat to this ecologically vital habitat, but impedes our progress in ending open water dumping in Long Island’s waters once and for all.”

Adrianne Esposito, a founder of Citizens Campaign for the Environment, said she and other environmentalists are “adamantly opposed” to having a site in the eastern Sound because the EPA and Army Corps already have the central and western sites that have the capacity to handle all dredged material.

“We don’t want Long Island Sound to be turned into a landfill,” she said.

In its plan, called the  “Designation of Dredged Material Disposal Site(s) in Eastern Long Island Sound, Connecticut and New York,”  the EPA said there are alternative disposal sites – Niantic Bay and Cornfield Shoals – that have been used before. But the EPA said those sites are “in a highly dispersive environment,” and disposal there is limited to certain types of sandy sediment that can also be used to replenish beaches.

Rep. Joe Courtney, D-2nd District, said there are safeguards in the EPA’s plan to establish a long-term site in the eastern Sound that would allay the concerns of environmentalists who oppose the proposal. Courtney said the EPA and the Army Corps of Engineers will carefully monitor the silt, sand, rock and mud dumped at the site.

“They set a lower bar for what could trigger [a ban on dumping,]” Courtney said.

The eastern site is also close to Electric Boat and the submarine base.

Supporters of the plan say submarine operations and construction efforts rely on the proper dredging of the Thames River and connected harbors.

In addition, the Navy plans to dredge approximately 60,000 cubic yards at Naval Submarine Base New London over the next few years to support the construction of a new pier to accommodate the newest Virginia class submarine.

Dumping the dredged material further away at the next closest site would double the cost, they say.

Courtney also said that in the last Base Realignment and Closure (BRAC) round, conducted in 2005, the Groton submarine base received the lowest score on harbor maintenance compared to other submarine bases, because of the temporary and short- term dredge disposal options available to the base.

“Getting this 30-year plan approved will get this issue off the table if there’s a BRAC,” Courtney said.