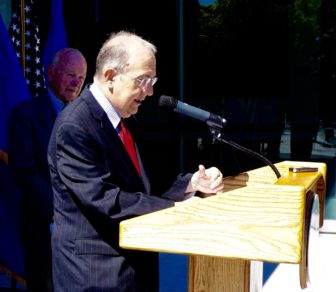 New Haven — Senate President Pro Tem Martin M. Looney joined Gov. Dannel P. Malloy at a downtown press conference on economic-development policy Tuesday, a reminder he does not intend to curtail his schedule as he awaits a kidney transplant.

Looney, whose need for a kidney was made public a week ago in a Facebook appeal for potential donors from his parish priest, said his doctors tell him that his kidneys are failing after more than four decades of taking steroidal medications for a severe form of rheumatoid arthritis.

He said he is weeks or months away from requiring dialysis if a transplant is not performed.

Before the press conference, Malloy told Looney he has tried repeatedly to call or leave a message.

“It seems your voicemail is always full,” Malloy said.

Looney smiled. Not only is his voice mailbox constantly full, an organ donor line is getting calls from potential donors for the Senate’s top leader, who was first elected to the General Assembly in 1980 as a member of the House.

“It’s been very gratifying,” he said. “People have been calling the donor line to be tested.”

The organ donor line at Yale-New Haven Hospital is 1-866-925-3897. Looney, one of 621 people on a kidney waiting list at Yale, said individuals with a blood type of A or O are potential donors, but there is a system of paired donations. It essentially is a matchmaking system for willing donors not compatible to donate an organ to a friend.

The median wait for a kidney is 35 months, according to Yale.

Looney, 68, is a candidate for re-election to another two-year term. He said he can continue to perform his duties, even if on dialysis. His options would be daily home dialysis or going to a dialysis center two or three times a week.

He probably would choose home dialysis.

Looney, who says no family member has tested as a match for a transplant, smiled and shrugged at his medical condition’s becoming public, along with an error in the original posting on Facebook, which reported incorrectly he had one kidney.

“I have two kidneys,” he said.

It’s just that neither are working well, he said, smiling.

Looney said he is asymptomatic. Only regular blood tests showed the loss of kidney function.

He was advised to go public to “cast a wide net” for a potential donor for him — or others.

On Tuesday, he joined Malloy to promote the state’s economic-development assistance programs outside Alexion, a growing pharmaceutical company that relocated downtown, not far from Yale, with state aid. The company specializes in finding treatments for rare diseases.