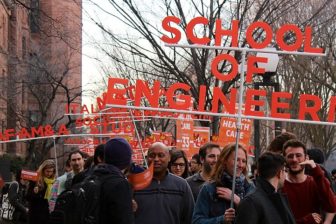 Graduate student teaching assistants at Columbia University won a ruling Tuesday that may inject new life into the decades-long quest to unionize their contemporaries at Yale.

The ruling came from the National Labor Relations Board. The board ruled in a 3-1 vote that graduate students who work as teaching and research assistants at private universities have collective bargaining rights — that they can in fact be viewed as both students and workers under the law.

The ruling specifically addressed an organizing drive at Columbia. The ruling overturned a previous NLRB decision in a similar case involving graduate student workers at Brown University. Tuesday’s decision disagreed with the NLRB’s conclusion in that earlier Brown case that “collective bargaining would unduly infringe upon traditional academic freedoms … [including the] right to speak freely in the classroom” or infringe on the teacher-mentee relationship. The new decision also argued that bargaining between administrations and graduate student employees has become a “fact of American university life,” and that the employees clearly fit into the commonly accepted definition of workers under federal law. (You can download the full decision at this page.)

Aaron Greenberg said Tuesday that the ruling changes the landscape at Yale, too, where he chairs UNITE HERE Local 33, which is seeking to unionize graduate student employees.

And Yale President Peter Salovey called the ruling an opportunity for the campus to engage in “robust debate” about unionization.

“For graduation student employees across the country, this is a huge moment, years in the making,” Greenberg said.

“We now have a clear path to victory for our union. For the last few years, hundreds and hundreds of members have taken to the streets and made clear that what they want is to sit down and negotiate with the adminstration. We’re going to win.”

Union leaders were still digesting the opinion and planning next steps Tuesday afternoon, Greenberg said. He said the hope remains that they can negotiate a “fair” and open union election process with Yale’s administration.

Yale has opposed the drive since it began in the 1990s, arguing that the students are not employees; and that they receive generous stipends and benefits as part of their work.

Following is the text of a message Salovey sent to the Yale community Tuesday:

“As a Yale graduate student, professor, and administrator, I have experienced firsthand how the teacher-student relationship is central to the university’s academic enterprise. The mentorship and training that Yale professors provide to graduate students is essential to educating the next generation of leading scholars. I have long been concerned that this relationship would become less productive and rewarding under a formal collective bargaining regime, in which professors would be ‘supervisors’ of their graduate student ‘employees.’

“Today the National Labor Relations Board has ruled that graduate students at Columbia University, who assist with teaching and research as part of their education, are employees of that school. I disagree with this decision, which represents the third time in sixteen years that the board has changed its position on the question of whether graduate students are primarily students.

“The Graduate School of Arts and Sciences enrolls the world’s most promising students in its doctoral programs. These students choose Yale for the opportunity to study with our outstanding faculty, and to take advantage of the university’s wide array of academic resources, generous financial aid, and comprehensive benefits. Yale will continue to provide exceptional support to our graduate students as they focus on their scholarship, successfully complete their degree programs, and find rewarding careers.

“Although I disagree with the NLRB’s decision announced today, it presents an opportunity for our campus to engage in a robust discussion about the pros and cons of graduate student unionization. We should embrace the chance to debate this important issue, and we will conduct this campus discussion in a manner that is proper for a university — free from intimidation, restriction, and pressure by anyone to silence any viewpoint. All members of the Yale community should feel free to express their views on these matters, and we look forward to constructive and respectful discussions in the months ahead.”

Click here and here for previous stories outlining the union’s and Yale’s arguments for and against the campaign.