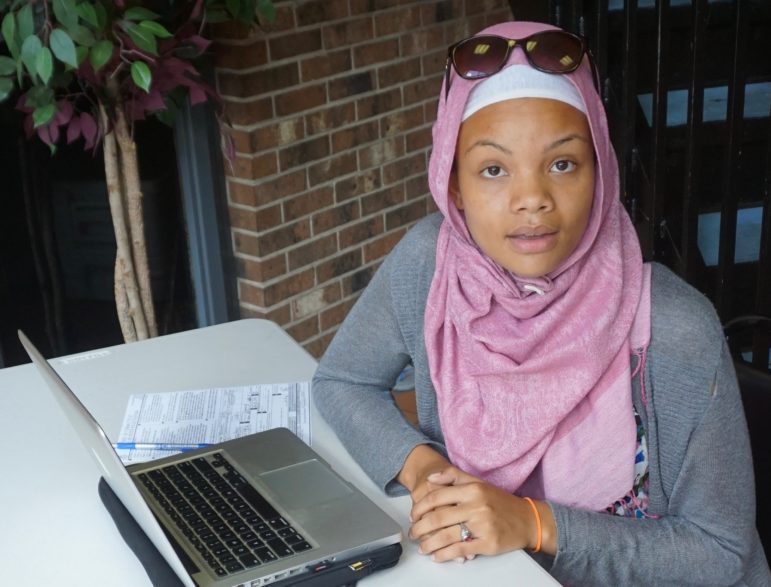 Alicia Hernandez Strong waiting to register voters at her mosque in New Britain.

New Britain — Alicia Hernandez Strong sat in the lobby of a mosque that didn’t exist when Barack Obama was elected president, telling Yemeni worshippers how they can register to vote in this old industrial city, a place made and remade by successive tides of immigrants. She comes every Friday, setting up a folding table before afternoon prayers.

Strong is 20, a student at Wesleyan University, a Democratic activist and the daughter of U.S. Air Force veterans. She also is a convert to Islam, a step in a personal journey she says began with an intriguing world history class at New Britain High School. She smiles and ticks off four reasons for playing a small role in a month-old national campaign by Muslim groups to register one million new voters.

“I am Muslim. I am a Latina. And I am African American,” Strong says.

The fourth reason is Donald J. Trump, who has clashed with Muslim, Latino and black voters.

With his call to ban Muslims from entering the U.S., casting all followers of Islam as suspects in the war on terror, the presidential campaign of Trump is a galvanizing force for an unfamiliar political activism among many American Muslims, perhaps the most racially and ethnically diverse religious community in the U.S.

“Trump’s rhetoric, it woke up a lot of Muslims,” says Samem Jabarkhail, 27, an Afghanistan native who grew up in Connecticut and graduated from the University of Connecticut School of Law. “A lot of Muslims thought no one, not even a fringe candidate, would ever talk about the idea of a complete ban.”

Trumps’ anti-Muslim rhetoric and his rise as the standard bearer of the Republican Party has reopened old wounds from Sept. 11, 2001, when American Muslims found their loyalty questioned and their place in U.S. society challenged. Then, the community turned inward, as though willing itself to disappear.

“The first month, there were 10,000 or more Muslim children who did not go to school,” said Naji Almontaser, an executive board member of the Islamic Leadership Council of Metro New York and a leader in the New York Muslim Voter Information Club.

Almontaser, who emigrated to the U.S. from Yemen as a toddler in 1965, was politically uninvolved in 2001, despite his marriage to Debbie Almontaser, a prominent Muslim educator and activist who addressed the Democratic National Conventional in July. Now, he hands out cards to Muslims that say, “Vote. It’s about time.” 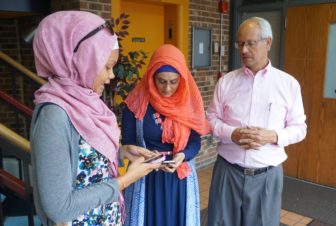 Strong with Debbie and Naji Almontaser.

The couple spoke Friday at Masjid Al Taqwa, the New Britain mosque where Strong worships and works to register voters. It was founded in 2009 by the Islamic Center of Central Connecticut, which established a permanent home here in a converted office building on Arch Street in the fall of 2012.

“This moment, with Trump, it’s very clear to me, we have to get involved,” Naji Almontaser said. “It’s clear this man is a racist. He is a bigot. And he’s poisonous, not only to the country, but to the world. There has not been one group of people that he did not insult, that he did not attack, that he did not make fun of.”

Last Friday, it was slow going. Strong registered only one new voter, but others took forms they can fill out at home and return to City Hall, a short walk from the mosque. By her count, about 90 Muslims responded by registering over the past month in New Britain.

“The first time I spoke here at the mosque [about voting,] it was mostly to an audience of men. The women were in a separate room watching me on video. When I came back into the women’s side, they were thrilled with me, so happy to see a Muslim woman advocating for the community,” she said. “Nobody has said, ‘Oh, you’re not doing it the way we would do it.’ It’s just we all have our ways.”

Debbie Almontaser talks less about Trump than she quotes Tip O’Neill in urging Muslims to register. Often speaking to immigrant audiences with little experience in democracy, she stresses how their voices and their votes count in the U.S., where a few dozen votes can shift local elections.

“So the biggest message we’re sending people is that all politics is local,” she said. “Getting them to see the process on a local level and how it easily impacts their lives and the lives of  their neighbors is very powerful. That’s why we’re going from city to city to city where there are large Muslim American communities to help them understand this and really empower them within their communities.”

Strong reinforced the point by telling the worshippers that the Republican councilman in the New Britain district where many Muslims live won by 20 votes. 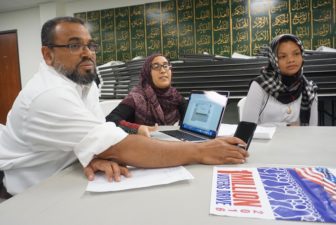 With immigration and higher birth rates, the Muslim population in the U.S. and Europe is projected to double by 2030. Surveys show Muslims in the U.S. tend to be more affluent and better educated than Muslims in Western Europe.

Muslim leaders estimate that at least 100,000 Muslims live in Connecticut. Polls consistently show more than half of Americans say they know little or nothing about Islam, and a Pew Research Survey in 2010 found only 41 percent personally knew a Muslim.

Those findings disturb Dr. Reza Mansoor, a Hartford Hospital cardiologist and founding president of the Muslim Coalition of Connecticut, a group organized after the 9/11 attacks to speak out against terrorism and do outreach to the non-Muslim world. But he is more troubled at the growing number of Americans with an unfavorable view of Islam, which was 17 percent before the attacks in 2001.

“It’s not Trump,” Mansoor said. “Trump is just riding this fear and hate and stuff. But that number has increased consistently over the last decade to 40 percent in 2012, and now over 50 percent, which is 160 million people, have a negative view of Islam.”

Mansoor also is president of the Islamic Association of Greater Hartford, based at a mosque in Berlin, the suburb adjacent to New Britain. He and his wife, Aida, became more active in their religious community after the birth of their daughter in 1995. His wife for the first time wore a hajib, the head scarf worn by many religiously observant Muslim women.

In a memoir he published earlier this year, “Stigmatized: From 9/11 to Trump and Beyond, An American Muslim Journey,” Mansoor described the assumption a professor in his medical residency program made about him, his wife and their faith. She asked, “Why do you make your wife wear that thing on her head?”

On Monday night, Mansoor sat in the mosque basement with Strong, Jabarkhail, Sawera Hussan and other young Muslims working to organize a conference on political activism on Sept. 9 at the Berlin Mosque. A few of the young men had just come off the lighted basketball court outside the mosque.

Strong, Hussan and two other young women sat a table with three young men, Mansoor and Mukhtar Suleiman, an adviser to the Muslim Youth Association of Connecticut. Mansoor kept his iPhone handy, periodically calling leaders of other mosques for help promoting the conference — and to remind them that the coalition has designated September as Muslim Voter Awareness Month.

Hussan showed him a poster with a picture of Trump and Hillary Clinton under the headline, “November 2016: Deciding Political Fate.” It promised a Muslim point of view on “politics, third parties, civil rights, immigration, Islamophobia and Hillary & Trump views on these issues.”

Mansoor urged them to both narrow the focus, perhaps by skipping immigration, and to add an element: a brief history of how the Prophet Muhammad drafted the Constitution of Medina, which guaranteed Jews and other non-Muslims the same cultural and political rights as Muslims, including freedom of religion. Mansoor said the role of the Prophet in establishing political rights is a reminder that nothing in Islam should be seen as discouraging Muslim involvement in secular politics.

The meeting ended when it was time for evening prayers, the fifth and final prayers of the day. The men retreated to an upstairs musallah, or prayer hall, where the mosque’s young imam, Refai Arefin, a graduate of Brown University and Quinnipiac law school, led 30 men in prayer.

The imam’s 17-month-old daughter toddled among the men, shaking her father’s car keys like a rattle.

Mansoor remained after evening prayers to talk about his hopes for the conference and the young Muslims organizing it. He sees the younger generation more willing to engage in politics, to be visible to the wider community, something some older Muslims recoiled from after 9/11. He explained why he had discouraged them from focusing on immigration.

“I want them to feel like they are part of America,” Mansoor said.

Mansoor says a majority of Muslims in Connecticut are immigrants like him, many from places where politics meant danger. Mansoor grew up in Sri Lanka, where the medical school he originally attended was destroyed during a civil war that pitted a Buddhist majority against a Hindu minority, with Muslims largely on the sidelines.

“Foreign policy is important, of course. But I want them to focus more on what’s important in America — health care, education, those issues that should be at the forefront of what Muslims also should be debating,” he said. “It shouldn’t just be immigration and foreign policy.”

He said Muslims fully participating in U.S. politics would be an important milestone, just as it’s been for immigrants before them. To Mansoor, it’s about a shift from an identity as an “immigrant Muslim” to an “American Muslim.”

“We’ve got to now take on that new identity and educate people on the importance of being an American in every way.” 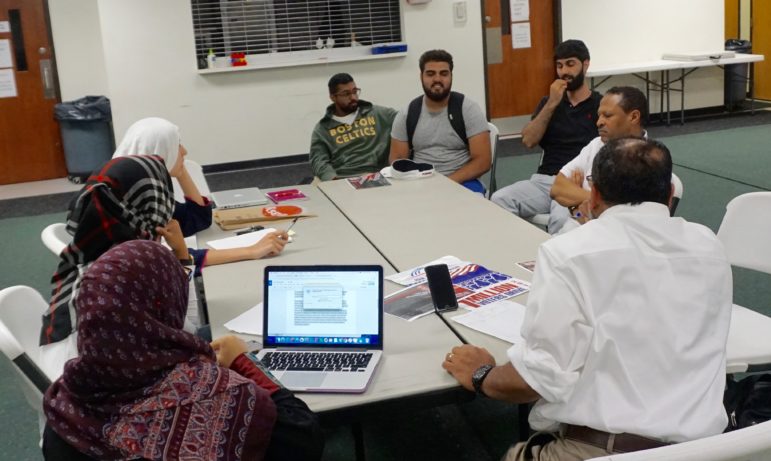 Mansoor leading a planning session for a conference on Muslim political activism.