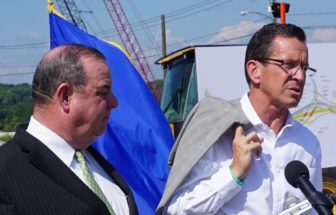 Waterbury — Gov. Dannel P. Malloy said Friday that Maine Gov. Paul LePage “sounds like a racist” when suggesting his state’s heroin epidemic largely is the fault of outsiders, specifically blacks and Hispanics from places like “Waterbury, Conn., the Bronx and Brooklyn.”

At the end of a press conference here to update progress on a project to eliminate a rush-hour bottleneck on I-84, Malloy and Mayor Neil M. O’Leary, both Democrats, were asked about comments the Republican governor of Maine made Wednesday night about out-of-state minority drug dealers.

LePage was challenged at a public forum Wednesday night by a New York businessman about the racial climate the governor has created, at least in part by comments in January about out-of-state minorities.

“They come up here, they sell their heroin, they go back home,” LePage said then. “Incidentally, half the time they impregnate a young white girl before they leave, which is a real sad thing, because then we have another issue we have to deal with down the road.”

The Portland Press Herald reported LePage defended that comment Wednesday, saying it is backed up by a dossier he keeps in his office of every drug-dealing arrest in Maine since January.

“I don’t ask them to come to Maine and sell their poison, but they come, and I will tell you that 90-plus percent of those pictures in my book, and it’s a three-ringed binder, are black and Hispanic people from Waterbury, Conn., the Bronx and Brooklyn,” LePage said.

O’Leary, the city’s former police chief, said the availability of cheap heroin laced with fentanyl, an anesthetic, is a public health crisis and a challenge to law enforcement throughout the U.S.

“This is not a racial issue. This is a national epidemic. It crosses every demographic,” O’Leary said. “Those remarks are outrageous, and I don’t think they really justify further comment, quite frankly.”

Malloy said LePage’s claim that 90 percent of all defendants charged in Maine with drug dealing are minorities from Connecticut and New York “sounds far-fetched.”

Whatever the actual statistics, Malloy said, drawing racial and geographic distinctions about those arrested “doesn’t make a whole lot of sense.”

Does that make LePage a racist?

“I think he sounds like a racist,” he said.

LePage’s press secretary, Adrienne Bennett, did not respond Wednesday to  a request for comment. Malloy’s remarks are likely to be the least of the concerns for LePage or his press staff.

The governor made national news with a threatening phone message he left for state Rep. Drew Gattine after a television reporter suggested Gattine had called him a racist, which Gattine denied.

“Mr. Gattine, this is Gov. Paul Richard LePage,” a recording of the governor’s phone message says, according to the Press Herald. “I would like to talk to you about your comments about my being a racist, you (expletive). I want to talk to you. I want you to prove that I’m a racist. I’ve spent my life helping black people and you little son-of-a-bitch, socialist (expletive). You … I need you to, just friggin. I want you to record this and make it public because I am after you. Thank you.”

Gattine gave the governor his wish and made the recording public in response to a freedom-of-information request.

LePage raised the stakes by summoning a Press Herald reporter and two-person TV crew from WMTW, then telling him he wished he could kill Gattine in a duel.

“When a snot-nosed little guy from Westbrook calls me a racist, now I’d like him to come up here because, tell you right now, I wish it were 1825,” LePage said. “And we would have a duel, that’s how angry I am, and I would not put my gun in the air, I guarantee you, I would not be (Alexander) Hamilton. I would point it right between his eyes, because he is a snot-nosed little runt and he has not done a damn thing since he’s been in this legislature to help move the state forward.”

LePage clarified later Friday he did not really intend to confront Gattine in a duel.

“Obviously, it is illegal today; it was simply a metaphor, and I meant no physical harm to Gattine,” LePage said in a statement posted on his web site. “But I am calling him out to stop giving inflammatory sound bites and get to work to end this crisis that is killing Mainers, destroying families and creating drug-addicted babies, all so the drug dealers Gattine is protecting can make a profit.”