About two-thirds of Connecticut businesses made a profit last year, yet fewer than half expect to add jobs at this time, according to the Connecticut Business and Industry Association’s annual survey of businesses.

The survey, which drew responses from 331 businesses, also found a strong lack of business confidence in state government and that fiscal stability and predictability are keys to restoring that confidence. The results were presented Friday at the Hartford Marriott.

“As the economy improves, so does the need for greater investment in plants and facilities here,” said CBIA President and CEO Joseph F. Brennan. “This survey shows that fiscal stability and predictability are keys to restoring business confidence in the state, which will lead to much-needed, job-creating investments.”

The survey found the proportion of profitable businesses at a 10-year high, despite slow job and overall economic growth in Connecticut. About 68 percent of survey respondents recorded a profit last year, a mark not seen in the survey since 2006. 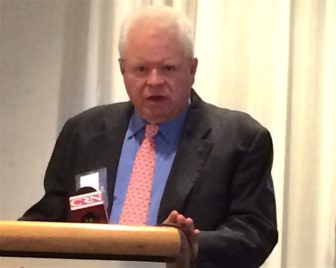 And 87 percent of businesses said their companies are growing or holding steady, compared with 82 percent from one year ago.

Despite this profitability gain, however, only 47 percent of participating businesses said they would continue to make job-creating investments in Connecticut.

Thomas A. DeVitto, chief marketing officer for BlumShapiro — which conducted the survey — said that 34 percent of respondents said they have been approached by representatives of other states about moving production outside of Connecticut.

DeVitto called the 2016 survey results “a real mixed bag.” While the profitability results are “a real positive message,” the lack of anticipated job growth shows “we do have a bit of work to do to create that environment.”

Among those companies planning to move significant production outside of Connecticut, 45 percent cited the high cost of doing business in the state.

Peter Gioia, the CBIA’s chief economist, warned state officials not to underestimate the significance of that last statistic.

Gioia said that while it was a positive step that Gov. Dannel P. Malloy and the legislature closed a nearly $1 billion hole in 2016-17 state finances without raising taxes, “a whole lot of (business) people make investment decisions based on how they feel.”

What could state officials do to give businesses more confidence?

Gioia suggested refraining from enacting any anti-business legislation — including tax increases — for the next five years. 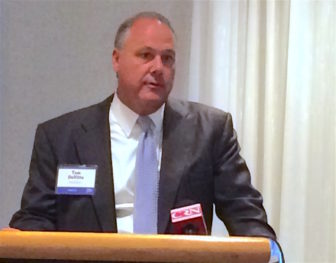 That may not be mathematically possible, though, given the huge debt obligations state government is expected to grapple with for at least the next two decades.

Connecticut entered 2016 with more than $70 billion in long-term obligations, owing nearly $26 billion to its pension funds and another $19.5 billion to its retiree health care program. The state also has relied increasingly on its credit card over the last two decades and is carrying more than $22 billion in bonded debt.

A recent analysis by the Pew Charitable Trusts found Connecticut’s combined debt represented 30.2 percent of personal income in the state in 2013, a ratio that was more than double the national average.

And this debt is projected to take a heavy toll on state finances for at least the next two decades, with costs in these areas frequently facing double-digit percentage growth.

Other survey findings include: