For David Rosen, 11 years in court just a beginning in school case 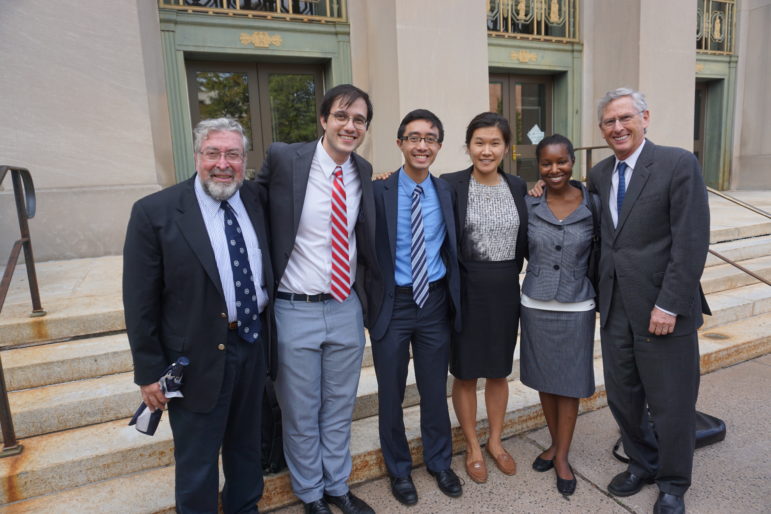 David Rosen helped convince a state judge to order an overhaul this week of Connecticut’s public-school system. Now the crusading New Haven attorney is preparing to make sure that state officials follow the judge’s passionate demand.

Rosen directed the Yale law students who filed and pressed the 11-year-old case, Connecticut Coalition for Justice in Education Funding (CCJEF) v. Rell. Rosen also wrote some of the motions and made some of the court arguments, though Joseph Moodhe of Debevoise & Plimpton eventually took over as lead counsel, working pro bono.

On Wednesday Superior Court Judge Thomas Moukawsher issued a ruling in the case that has shaken the foundation of the state’s educational system. He declared unconstitutional and “irrational” the way Connecticut funds and oversees local public schools; he found that the state government has the enforceable responsibility under Connecticut’s constitution to provide all students an adequate education — not just the wealthy suburban kids who rank first nationwide in reading scores, but also the many “functionally illiterate” high-school graduates from the 30 poorest Connecticut school districts, which rank below Mississippi and 39 other states in those same scores.

“This judge rose to the occasion,” Rosen said in an interview Friday on WNHH radio’s “Dateline New Haven” program.

“This is a case I feel so privileged to be involved with,” Rosen said. “Let’s hope that this case has a very big impact and helps lots of children for years to come.” He predicted that New Haven schools, for instance, will receive more needed money from the state as well as the benefit of “some appropriate hard thinking” about the meaning of an elementary and secondary education.

In his ruling, Moukawsher gave the state 180 days to present:

After the state submits those plans, Rosen, his students in the Yale Law School Education Adequacy Project Clinic, and pro bono attorneys from the New York firm of Debevoise & Plimpton will have 60 days to weigh in on whether the state in fact obeyed the judge’s order.

In other words, Rosen’s work has just begun.

“This [judge’s ruling] is great after 11 years,” Rosen remarked. “But it’s sort of like the end of Portnoy’s Complaint, where after 350 pages, there’s a line — ‘‘So [said the doctor]. Now vee may perhaps to begin. Yes?’”

The judge’s ruling cited the above education budget cuts to local cities and towns this year — which coincided with an almost equal amount of increases to wealthier communities. 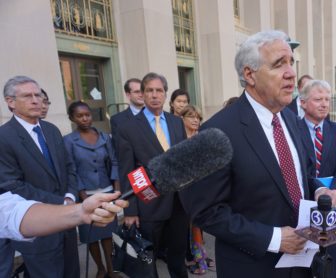 David Rosen, at far left, and Joseph Moodhe, listen to the chairman of CCJEF, Herbert Rosenthal.

David Rosen has played a role in high-profile social-change legal cases since his 1969 Yale Law School graduation. He was one of the attorneys who helped Black Panther leader Bobby Seale beat a murder rap in the New Haven torture and subsequent nearby murder of fellow Panther Alex Rackley. He has won numerous class-action discrimination and wrongful-death cases. He won a $900,000 jury verdict against East Haven police on behalf of Emma Jones (pictured with Rosen) in the killing of her son Malik. (An appeals court subsequently overturned that award.) His firm is currently working on a class-action lawsuit against the owner of the Church Street South apartment complex over the conditions tenants endured there.

As a teacher at Yale’s law school clinic, Rosen assumed responsibility for the students’ work in the CCJEF v. Rell education suit from former Yale law professor Bob Solomon. More than 100 students have worked on the case since its filing more than 11 years ago. They’ve researched the case, written briefs, and prepared oral arguments as part of coursework with Rosen.

Their case builds on two earlier landmark Connecticut class-action education lawsuits: Horton v. Meskill, which in 1977 established an equal right to education for all state students under Connecticut’s constitution and state responsibility for the inequities in a funding system reliant on local property taxes; and Sheff v. O’Neill, which in 1996 led to an order (still being put into practice) to reduce racial segregation in schools across urban and suburban lines.

Rosen said Judge Moukawsher’s Wednesday ruling in CCJEF v. Rell advances the quest begun in those suits by declaring that beyond regional or racial inequities, all students in the state are constitutionally entitled to an adequate education. (Read the full text of the ruling here.)

In so doing, the judge didn’t fully agree with Rosen’s requests. He and his colleagues sought a ruling that the state must spend more money on the schools. The judge found no basis to conclude the state spends too little overall; rather, he found that an irrational system leads to poorer communities getting shortchanged. He also strongly suggested in his ruling that money alone isn’t the problem. He found no rhyme or reason, for instance, behind how $1.8 billion in special education money gets spent.

The judge also found no evidence that Connecticut has any true educational standards. He cited accounts that some schools graduate functional illiterates from high school. (“The state’s definition of what it means to have a secondary education is like a sugar-cube boat. It dissolves before it’s half launched,” he wrote.)

He wrote that no evidence exists supporting the idea that paying experienced teachers or those with master’s degrees more money leads to better teaching; he compared the evaluation system that currently rates 98 percent of all Connecticut teachers as proficient or exemplary to “cotton candy in a rainstorm.” He also found no evidence supporting the idea that building new school buildings leads to better teaching and learning; he questioned the priority of spending billions on new construction rather than spending more on classroom learning.

Rosen acknowledged the judge’s legal reasoning in hesitating to prescribe solutions like spending more money. But, he added, “it would be hard to see how we can” carry out all the judge’s demands “essentially for free” without increasing overall spending.

He also argued that other good reasons exist for increasing pay for teachers the longer they teach: For instance, the schools can better attract promising teachers if those teachers conclude they can “make careers and lives” in the profession.

As for the choice between school construction and classroom spending, “if you have a choice between a beautiful building or Socrates sitting under a tree, go with Socrates,” Rosen said. But he questioned whether it’s an either-or choice. The state bonds for construction projects; direct year-to-year aid to schools comes out of the operational budget.

The true measure of which philosophy prevails will come in 240 days, after the state is required to prepare its plans and then Rosen & Co. either accept or oppose the proposed changes. The philosophies will also be tested in the negotiations among interest groups and elected officials over new rules, standards, and spending.

Whichever course is taken, David Rosen will be in the mix, as he has been for 47 years and counting, of momentous decisions involving social justice and individual rights.

He said that those follow-up responses will be part of the coursework for his Yale law students. The course, he mused, will be called “Solutions 101. Or maybe 303.”

Listen to the full radio interview with David Rosen: