ConnectiCare will stay on CT health exchange in 2017 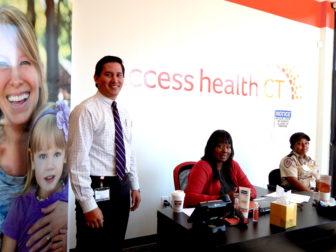 Staff at the Access Health CT enrollment center in New Britain preparing for the open enrollment that ended in January.

ConnectiCare, the single-largest insurer on the state’s health exchange, announced Tuesday it would participate in the exchange in 2017 working with the rate schedule the Insurance Department approved earlier this month.

That decision means two of the four companies that have sold policies through Access Health CT will participate again next year. Anthem also will continue to sell policies through the exchange.

“ConnectiCare is committed to providing access to high-quality healthcare for our 50,000 members on the exchange,” President and CEO Michael Wise wrote in a statement. “After hearing from state officials, providers and beneficiaries about the importance of our plan to Connecticut, we have decided to move forward into 2017 as a plan on the exchange at the rates approved by the department.”

The Farmington-based insurer covers about 48,000 customers, or about half of all of those on the exchange. About three-fourths who buy insurance through the exchange receive subsidies through the federal Affordable Care Act to help offset the cost.

Gov. Dannel P. Malloy hailed the company’s decision as “welcome news as many Connecticut residents who depend on the carrier for their health care services will continue to benefit from their inclusion in the exchange. … Our administration will continue working to ensure that Connecticut remains a leader in implementing an exchange that provides quality, secure, and affordable health care to all of our state’s families.”

Lt. Gov. Nancy Wyman, who is chairwoman of the exchange’s governing board, called it “very good news for Connecticut consumers and for our healthcare marketplace.  Since the inception of the Affordable Care Act, Connecticut’s top priority has been expanding access to healthcare – ensuring that preventative care, treatment for chronic conditions, and a healthcare home would be available to everyone no matter their income, gender, or health status. ConnectiCare has been a valuable partner in this effort to build a healthier state, a stronger workforce, and a better marketplace for us all.”

ConnectiCare, which had expressed fears the new rates would not be sufficient to cover its expenses next year, filed a lawsuit challenging them in New Britain Superior Court, as well as an administrative appeal with the Insurance Department. The company had sent a letter to the state last Friday indicating it would not participate in the exchange in 2017, but issued a public statement Monday saying it still was talking with exchange officials and hoping to participate. Wise said that both challenges as well as the termination letter have been withdrawn, but did not elaborate on why the new rates have become acceptable to ConnectiCare.

“Throughout the rate-setting process, ConnectiCare has emphasized its goal of remaining on the Connecticut health insurance exchange in a manner that is fiscally responsible,” he wrote. “We raised our concerns regarding the adequacy of the rates that were approved by the Connecticut Insurance Department on September 2, 2016. We pursued all available options for the department to consider additional information that we believe is relevant to setting an adequate rate.”

ConnectiCare originally sought to increase its premiums by an average of 14.3 percent, then increased its request to 17.4 percent in early August, and eventually to 27.1 percent. The department approved a 17.4 percent hike. ConnectiCare says that new data became available after Aug. 4 that shows the 17.4 percent request is not adequate. The company projects $20 million in losses from their exchange plans this year.

Had the Farmington-based ConnectiCare left, it could have had a huge impact on the exchange, which already has lost two of its four carriers.

UnitedHealthcare and the state’s health insurance co-op, HealthyCT, are already in position to withdraw from the exchange after this year. They insure about 13,000 customers on the exchange, which is about 12 percent of the total.