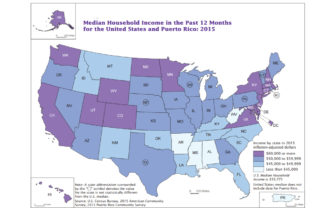 The nation had a robust increase of  5.2 percent in household median income.The census said no state had a decrease in growth and 39 had statistically significant increases in 2015 over 2014.  Of those states with significant increases, Connecticut had the smallest rate of household median income growth, just 1.8 percent.  And not everybody benefited from Connecticut’s modest income growth.

“While Connecticut still boasts the sixth lowest poverty rates in the United States, and only five states and Washington, D.C., have higher median household incomes, little progress was made in returning to pre-recession levels: statewide poverty remained stuck, and incomes inched upwards slower than most of the country,” said an analysis by Connecticut Voices for Children of the census bureau’s latest American Community Survey results.

The poverty rate declined in Fairfield, Hartford, Litchfield, Middlesex and New London counties, but there was no change in Tolland County and increases in New Haven and Windham counties, according to an earlier analysis by Trend CT.

But median income in Connecticut varied widely depending on where you lived, from a high of $86,414 in Fairfield County to a low of $62,905 in Windham County.

The census also said there were changes in the proportion of Connecticut families in each income bracket.

Meanwhile, there was little growth – and even a reduction of growth – in several middle-income brackets.

But there was growth in all higher brackets.

“Virtually all of the economic growth has been captured by the higher income brackets,” he said. “Connecticut is therefore becoming more divided by income even as overall there is modest improvement.”

The census bureau said Connecticut has had a slight improvement in its “Gini index” a standard economic measure of income inequality. But the state is still one of five, the others being California, Florida, Louisiana and New York, that had an index higher than the national average.

The census bureau also said 94 percent of Connecticut’s residents in 2015 had health insurance, an improvement over the year.

“As was the case particularly for states across the nation that expanded Medicaid, the rate of Connecticut’s uninsured fell, from 7 percent to 6 percent.  The drop was small compared to other states, in part because Connecticut already boasted one of the lowest uninsured rates in the nation,” Connecticut Voices for Children said.

“In order to have strong income growth you need to have serious competition for jobs across all sector. We don’t have that,” he said.

Gioia said Connecticut’s moderate job growth has left the state “much better than it was a few years ago. But if you look at other states, it doesn’t look so hot,” he said.

He said the prospect of tax increases continues to worry businesses and has created an uncertain business climate.

Carstensen also cited Connecticut’s poor job growth as a reason for the state’s slow income growth, saying state employment is still about 12,000 jobs below where it was in March 2008.

Carstensen said Connecticut’s economic output is still below the state’s previous peak in the fourth quarter of 2007, right before the nation sank into recession.

He said employment in the state began to recover in 2010, but real economic growth continued to shrink until 2012 and the state’s recovery began nearly three years after the nation turned the corner economically.

“The census report basically confirms what we already knew,” he said. Connecticut is enjoying a very modest growth in incomes, but slow job creation since the recession. “There is nothing in this that is encouraging,” he said. “The best you can say for it is that Connecticut is not slipping backwards.”