Auditors: State employed spills-response supervisor who couldn’t do the job 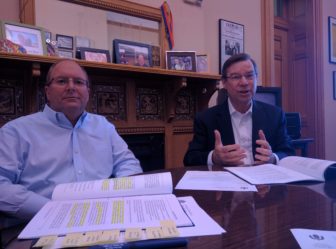 The auditors, who learned of the matter involving Department of Energy and Environmental Protection staffer Pasquale Cinotti through an employee “whistleblower” complaint, reported the matter to Attorney General George Jepsen’s office.

Pasquale, who received no review after six months and a rating of “good” on his annual review, asked for a demotion after one year on the job. Two months after that request, on Jan. 26, 2016, he was moved to an emergency response coordinator’s post, a non-supervisory job.

And while DEEP wrote in its response to auditors that Cinotti needed more training when hired — and that it was a “mistake” not to give him a six-month review — Cinotti was the most qualified applicant to seek the post.

“It was evident that the employee hired to fill the SERC (supervising emergency response coordinator) position was incapable of performing the duties of the position before the demotion, yet was compensated at a supervisory level,” Geragosian and Ward wrote in their report.

Cinotti started at $65,993 per year as a supervisor, according to Comptroller Kevin P. Lembo’s office. And before he left the supervisory post, his pay had risen to $70,376.

The auditors noted Cinotti also was earning credit toward a public hazardous duty pension, and was provided a state vehicle with unlimited access. And his state vehicle was driven more than 19,000 miles in his first year on the job “in apparent conflict with state policy to prevent the personal use of state vehicles,” Geragosian and Ward wrote.

Cinotti’s salary after his demotion to a non-supervisory position was $60,635.

DEEP hired Cinotti from the former Northeast Utilities in August 2014 to fill one of three supervising emergency response coordinator posts.

According to the specifications, duties include: “scheduling, overseeing and reviewing the work of staff engaged in hazardous materials spills and releases; mitigation containment and cleanup; coordinating on-the-scene clean-up efforts with federal, state and municipal agencies; monitoring threats to public health and safety; and assuming primary responsibility in the field for all on-site activities.”

“We have significant concerns about the apparent waste of resources and the burdens placed on the other employees within the division, which could potentially threaten the safety of employees and the public at large,” Geragosian and Ward added.

Cinotti could not be reached for comment. A message seeking comment from him was left with the Department of Energy and Environmental Protection.

In its written response to the auditors, DEEP wrote that Cinotti had worked “in a lead/supervisory capacity for 12 of his 32 years at a major private utility.”

And “of all the candidates that were interviewed, this employee was the only candidate that had the requisite level of supervisory skills and experience to serve as the third supervisor in this division.”

The department added that it recognized Cinotti “would need additional training to build the experience and exposure to the wide range of (spill) release types that the unit responds to.”

DEEP spokesman Dennis Schain said that, while the department agrees Cinotti should have received a six-month review, Cinotti’s supervisors “were focused on providing this employee with the support and training he needed to succeed. They felt he was making strong progress toward building the knowledge base necessary to supervise the agency’s response to the wide variety and complexity of situations our emergency response group is called upon to address.”

Schain also said that Cinotti’s had to dedicate considerable time to training during his 15 months in the supervisory role, and this limited his ability to reduce the the compensatory time accumulated by other supervisors. But the department believes that Cinotti eventually would have reduced comp time levels had he remained in a supervisory post, Schain said.

DEEP added that while the department and Cinotti mutually agreed to demote him from the supervisory post in late January 2016, “DEEP does not agree that this action was needed for safety reasons. DEEP strongly disagrees with any suggestion that the decision to hire this individual at any time threatened the safety of the public or other DEEP employees.”

DEEP also wrote that Cinotti, as a supervisor, had to be ready to respond at any time and his vehicle use was “in line with the current use and expectation for all members of the unit.”

The impacts of climate change on Connecticut residents’ health run a long range of direct and indirect outcomes.

With trash plant at death’s door, is it time for state leadership?

The uncertain fate of MIRA, the region's trash-to-energy facility, has some wondering whether it should be run as a utility.