No, court tells CT, you don’t have to redo a couple million ballots 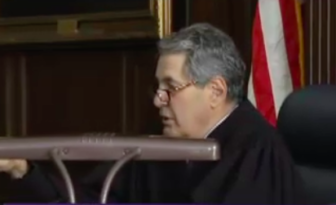 Supreme Court Justice Richard N. Palmer dismissed an unusual last-ditch appeal Thursday by John R. Price to get on the ballot as the U.S. Senate nominee of the faction-riven Independent Party of Connecticut, sparing state officials a scramble to redo ballots and election software.

The dismissal came after a hearing in which Palmer essentially acted as a trial judge because of a quirk in Connecticut law that states questions of ballot access in federal races be resolved by direct appeals to the state Supreme Court.

Presented with competing claims for control of the Independent line on the ballot, Secretary of the State Denise Merrill had declined to list either Price, who was endorsed by a Waterbury faction, or Republican Dan Carter, who was cross-endorsed by a Danbury faction.

The law and calendar were both against Price, who was seeking a court order directing Carter to relinquish his claim to the cross-endorsement and Merrill’s office to revise the ballots and software for counting votes.

Military and overseas ballots already have been printed and mailed, and two million copies of Connecticut ballots already are being printed to be delivered next week to municipal officials to meet a deadline for the availability of absentee ballots. The ballots cost 50 cents each.

Memory cards already have been programmed for the optical scanners that count votes, an expense of $93,000. With various state House and Senate districts, there are 454 variations of ballots to be used in the state’s 169 cities and towns.

Palmer seemed intrigued by the idea of “a rogue group” hijacking control of a minor party.

“What remedy does a party have when an obviously rogue group has its own caucus?” Palmer asked.

He was told by lawyers for the state and Carter that state law gives the Supreme Court jurisdiction to review the actions of election officials, not to referee the internal feud of a minor political party.

“I don’t believe the court has jurisdiction,” said Benjamin Proto, a lawyer for Carter. “It’s ultimately a political question.”

Palmer said he, too, believed his jurisdiction was narrow under state law, primarily to review the propriety of actions by the secretary of the state or other election officials.

“Did she make a ruling that was improper or illegal in any way?” Palmer asked Joseph Rinni, the lawyer for Price.

Palmer granted a motion by Carter and a lawyer for the Danbury faction of the Independent Party to dismiss the case.

An uneasy truce struck two years ago among the factions crumbled this year amid conflicts over, among other things, whether the Independent Party should cross-endorse major-party candidates or develop its own candidates.

The Danbury faction cross-endorsed Carter, a state representative who is the Republican nominee for U.S. Senate, at a caucus presided over by Danbury Mayor Mark Boughton, a Republican.

The Waterbury faction nominated Price, a registered Democrat from Wallingford who says he has little use for either major party. The Waterbury group says the Danbury caucus was invalid, because members of other parties were allowed to participate.

The two factions are pursuing a separate case in Superior Court to address the larger issue of who controls the party, a question to be resolved well after the 2016 election.

The upshot, according to Patrick Gallahue of the secretary of the state’s office: “The ballot stays as it is, and no one gets the Independent line for U.S. Senate.”