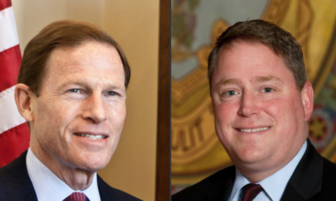 John R. Price says he is relinquishing his claim to the Independent Party’s nomination for U.S. Senate, a move intended to end an intra-party fight and give Republican Dan Carter the party’s cross-endorsement and a second line on the ballot. But with many ballots printed and optical scanners programmed, it may be too late.

The office of Secretary of the State Denise Merrill indicated it was unlikely to revise ballots in response to Price, who said he intended to deliver a letter formally ending his campaign by the close of business Friday.

“I think the position of the office is the same as it was in court, which is that the deadlines for ballot printing and many other things have already passed and that it’s simply too late at this point,” said Patrick Gallahue, a spokesman for Merrill.

Price’s decision to cede the Independent line to Carter comes a day after Supreme Court Justice Richard N. Palmer dismissed his last-ditch appeal, saying he had no grounds or jurisdiction to declare Price the Independent nominee and order Merrill to place his name on the ballot.

Presented with dueling nominations for U.S. Senate in August — one faction of the party endorsed Price, while another cross-endorsed Carter — the secretary of the state’s office declined to give either candidate the Independent line on the ballot against U.S. Sen. Richard Blumenthal, a Democrat seeking his second term.

Now that the dispute is resolved, Carter said the law is clear: He has sole claim to the Independent Party endorsement and should appear on the Republican and Independent lines of the ballot this fall.

Price said that is his hope – for the Independent Party, as much as for Carter.

“In an effort to give independent voters and voters of Independent Party the opportunity to select the candidate of their choice, the secretary of state now has ample time to place a nominee on the ballot line and print ballots accordingly,” Price said.

Failing at the Supreme Court, Price said he did not want to be responsible for leaving the Independent Party without a Senate candidate on the ballot in 2016 and, most likely again in 2018.

“Then I’m just another craven politician,” Price said. “Then it becomes an ego trip. That’s not who I am.”

Minor parties first get ballot access through expensive and time-consuming petition drives. A cheaper and easier way to keep a ballot line in subsequent elections is by garnering 1 percent of the votes cast the last time a particular office was on the ballot.

“I think people of the Independent Party should have the line. They shouldn’t lose it over this,” Carter said.

Cross-endorsements have been pivotal in some races.

Without the votes cast for Dannel P. Malloy on the Working Families line in 2010, the Democratic nominee would not have been elected governor. State Rep. Pamela Staneski, R-Milford, won by 150 votes in 2014, when 253 of her votes came on the Independent line.

In other races, the cross-endorsements have been as much about preserving the minor party’s ballot line.

This year, the Danbury faction of the Independent Party cross-endorsed Carter for U.S. Senate and dozens of other Republicans for state legislative seats. A Waterbury faction opted to endorse Price, a Wallingford Democrat who says he has no use for either major party.

Blumenthal is cross-endorsed by the labor-allied Working Families Party and will appear twice on the ballot. In recent years, the Independent Party has been cross-endorsing Republicans, providing a conservative counterweight to the Working Families.

Price said his withdrawal leaves the secretary of the state with no excuse not to revise the ballots and give Carter, a state representative from Bethel, a second line on the ballot.

“Hopefully, Dan will get enough votes on the Independent line to keep the line for the party,” Price said.

Merrill seems unlikely to change the ballots without a court order.

Gallahue, the spokesman for the secretary of the state, said about 40 percent of the ballots for 2016 already have been printed at a cost of about $350,000. The state also has paid $93,000 to program the memory cards that go into the optical scanners used by all 169 cities and towns to tabulate voting.

“I’m not sure if I want to take it to court,” Carter said. “I want to use my limited resources on ridding the state of Dick Blumenthal.”