A derelict factory building in Bridgeport in August.

Connecticut’s urban centers are shackled by unemployment, homelessness and other poverty indicators that dwarf those of surrounding suburbs, the state’s chief municipal lobbying group wrote Monday in a bulletin to state legislative candidates.

The Connecticut Conference of Municipalities also wrote that Bridgeport, Hartford, New Haven and Waterbury combined provide work for 75,000 suburban residents who commute into these centers.

“If these hubs fail, the suburbs around them will also plummet,” the report continues. “People won’t move their families or businesses to regions without a strong cultural and work base.”

Among the chief findings of the report are: 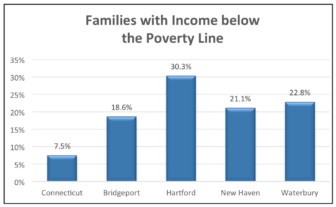 Hartford’s budget this fiscal year is $22.6 million in deficit, a shortfall of about 8 percent, Bronin told the Municipal Finance Advisory Commission on Sept. 15.  And the gap balloons to $50 million, or almost 20 percent of total expenses, in 2017-18.

Hartford’s bonded debt is driving a significant portion of that red ink.

Further complicating matters, Hartford already has Connecticut’s highest property tax rate — at 74.29 mills or $74.29 for every $1,000 of assessed property value. And 51 percent of its property value is exempt from taxation. That includes hospitals, universities, an airport, a trash-to-energy plant, and numerous state offices and facilities.