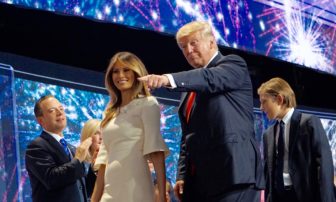 At the GOP convention, Donald J. Trump exits the stage with his wife, Melania. She says she accepts Trump’s apology.

Connecticut Republicans struggled over the weekend to gauge how badly their campaign to win control of the Connecticut General Assembly has been sidetracked by the spectacle of a defiant Donald J. Trump facing off against the establishment of both parties over a video showing him crudely boasting of his ability as a celebrity to molest women with impunity.

The Republican state chairman stood with Trump, but one GOP candidate for state Senate urged Trump to yield the presidential nomination to his running mate, Indiana Gov. Mike Pence, and others fretted that the unpopularity of both Trump and Hillary Clinton would turn voters deaf to state and local issues.

“I tried to give Donald Trump the benefit of the doubt, but I think the current nominee has failed to meet his responsibilities,” said Heather Somers of Groton, a GOP Senate candidate in a competitive district who called for Trump to step aside. “I think it’s very important we have someone who can unify our party.”

Others declined to take that step, while expressing uncertainty about their ability to vote for Trump and doubts as to whether their talking points about the fiscal health and economic climate of Connecticut under the leadership of a Democratic governor and legislature can compete with the drama of a party debating the fitness of its presidential nominee.

House Minority Leader Themis Klarides, R-Derby, who originally supported Ohio Gov. John Kasich and then agreed to become a Trump delegate to the Republican National Convention, said she was re-evaluating her support for Trump, a process she called secondary to the challenge of refocusing voters on state issues.

“My number one concern, more than the presidency, is the state of affairs of the state of Connecticut,” Klarides said. “What we do on the legislative level and governor level affects people and their daily lives more than anything else.”

But Klarides and Senate Minority Leader Len Fasano, R-North Haven, acknowledged the obvious: To an unprecedented degree, the presidential campaign has become a sideshow in which Trump’s defense of his vulgar boasting about mistreating women quickly turned into an aggressive attack on the sexual improprieties of Bill Clinton. 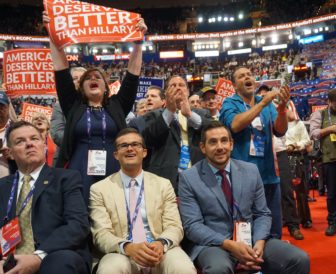 “I think that Trump’s comments, coupled with the disclosure of emails where Hillary says privately she’ll say one thing and publicly say another, I think people are just saying these are two very bad candidates and some are going to sit it out,” Fasano said.

Democrats and their allies moved quickly to use the Access Hollywood video of Trump, in banter with host Billy Bush not meant to be aired or recorded, crudely talking about trying to bed a married woman and his ability to kiss any pretty woman or grab them by the crotch, due to his fame.

Candidates demanded their GOP opponents speak out against Trump.

“Now is the time for Republican Party leaders and Republican candidates in Connecticut to put party politics aside and to clearly and unequivocally reject Donald Trump,” said Sen. Dante Bartolomeo, D-Meriden. “If they do not, they have signaled their support for Trump through their silence.”

No Republican candidate seemed willing to defend Trump, and some described his behavior in ways once unimaginable. Klarides spoke in scathing terms about what she said was the obvious sexual insecurity of the thrice-married billionaire nominee.

“Those are the words of an insecure person,” Klarides said. “This is a man, I don’t care if you are 19 or 50, rich or poor, a guy talking to another guy about their sexual conquest, that’s something that a man who is truly secure doesn’t do.”

Fasano, who criticized Trump’s anti-Muslim rhetoric early in the campaign season and declined to endorse Trump or be a delegate on his behalf to the Republican National Convention, said he felt no obligation to disavow a nominee he never supported.

Susan Hatfield of Pomfret, center, at the convention. Now, she wants to see a more contrite Trump.

“I am not endorsing him or being anywhere around him. I don’t have to defend him. My silence doesn’t mean aquiesence. I don’t support him. My position is clear. But I don’t have to answer for anything he says,” Fasano said.

Sen. Toni Boucher, R-Wilton, another of the elected Republicans who preferred Kasich to Trump, said before the debate she was undecided about her vote for president.

“We are presented with two flawed candidates on many levels,” Boucher said. “Every day brings a new revelation.”

Peter Wolfgang, the executive director of Family Institute of Connecticut, a conservative group that focuses on social issues, said the Trump he saw in the video was the Trump he and everyone else has seen throughout the campaign.

Wolfgang said he saw Trump before the latest scandal as a detriment to down-ballot Republicans in Connecticut, if only because his unpopularity is a greater factor than the unpopularity of Democratic Gov. Dannel P. Malloy, who is not on the ballot. 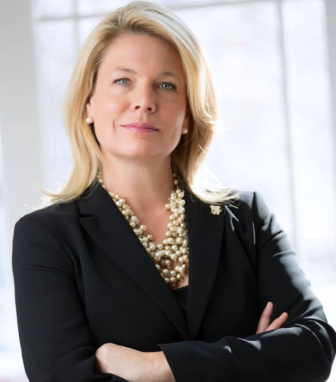 He said he fears that GOP calls for Trump to quit the race will “spoil the brand further and depress turnout. This spectacle of the party turning on Trump, I understand why they are doing it — to save themselves and what can be saved.”

Republicans need a net gain of four seats in the state Senate to turn a 21-15 Democratic majority into a 19-17 GOP advantage. In the House, the GOP needs a net gain of 12 seats to turn an 87-64 Democratic advantage into a 76-75 GOP majority.

One of the GOP’s brighter hopes is Somers, a former Groton mayor and 2014 nominee for lieutenant governor competing for a seat being vacated by the retiring Sen. Andrew Maynard, D-Stonington.

Somers said she found Trump supporters unwavering Saturday night at a Grange dinner in rural Sterling. If anything, the calls for Trump to step aside by some national GOP leaders strengthened their commitment, she said.

But that feedback did not dissuade her from calling on Trump to quit, saying she could not support the man seen in the Access Hollywood video.

The challenge now, she said, was to engage voters on the economic policies of the Malloy administration and the Democratic legislature. Going door to door on the shoreline Sunday, she said, that was difficult.

“I spent my time trying to refocus voters on the issues facing Connecticut,” she said. “I feel like our presidential election has been hijacked.”

J.R. Romano, the state GOP chairman, said he accepted Trump’s apology, though he did not dismiss the anger against him.

“I understand the reaction, and I hope that we can accept Donald Trump’s apology the same way America and Hillary accepted Bill Clinton’s,” Romano said.

Susan Hatfield of Pomfret, a Trump delegate for whom Trump was her first and only choice for president, said before the debate Sunday she was hoping to see a truly contrite Trump, something she did not see in his first response.

“I agree with Pence’s position on this. I am deeply offended. I can’t defend his remarks,” Hatfield said. But she added, “We are a country where none of us are perfect by any means. It’s all about how somebody moves forward from their mistakes.”

His first effort — an apology about his behavior tethered to a statement that Bill Clinton’s was worse — fell short in Hatfield’s view.

“I hope he takes full responsibility for the remarks without qualifications about what anybody else has done,” Hatfield said. “I would hope he would give an unqualified apology from the heart.”