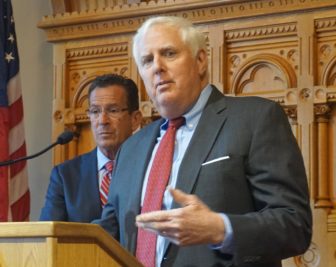 Arthur H. House, who has had an up-and-down relationship with Gov. Dannel P. Malloy, stepped down Wednesday as chairman of the three-member Public Utilities Regulatory Authority to become the first cybersecurity chief for the state of Connecticut.

House, 74, who has held senior posts in Congress, intelligence agencies and the private sector, authored a cybersecurity plan in April for the state’s utilities, warning that the U.S. Department of Homeland Security had concluded that “the technology deployed in shutting down parts of the power grid in the Ukraine in December 2015 confirmed that cyber attacks could disable American utilities.”

House said he will be a part of a U.S. delegation next month to the Ukraine to study the attack, the first confirmed instance of hackers shutting down a power grid. Power was restored in a matter of hours, House said, only because workers were able to take physical control of switching equipment.

Months later, the computerized control centers in the Ukraine still were not fully operational. Such an attack might be more difficult to overcome in the U.S., which does not have the same degree of manual backup controls, according to an examination of the incident by Wired.

In his report in April, House quoted the director of the National Security Agency as saying, “It is only a matter of the when, not the if, you are going to see a nation state, a group or actor, engage in destructive behavior against critical infrastructure in the United States.”

Norman C. Bay, the chairman of the Federal Energy Regulatory Commission, praised House’s qualifications to the governor at a recent conference, saying his cybersecurity report was well done, Malloy said.

“In the course of the conversation I was reminded that we have a treasure in our state with respect to a big policy view of cybersecurity,” Malloy said.

Malloy named House to PURA in 2012 as the agency was reconfigured, down-sized and placed within the new Department of Energy and Environmental Protection. In 2015, House and the other two commissioners wrote a memo arguing the authority was understaffed and insufficiently independent of DEEP, which often is a party to regulatory proceedings.

The governor responded coldly, publicly saying he disagreed with their analysis and invited the commissioners — House, John W. Betkoski and Michael A. Caron — to resign if they were uncomfortable in their posts. None did, and Malloy reappointed Betkoski to a new four-year term months later.

Malloy said the episode played no role in House’s departure from PURA.

“I understood. We all have frustrations,” Malloy said Wednesday at a press conference with House. “I can understand there was frustration. I just thought at the time that was a better conversation to have privately than publicly. Those issues have been resolved at least between PURA and myself. And that really has nothing to do with this.”

House obliquely alluded to the episode by complimenting Malloy for not shying from conflict.

“I admire your candor, your leadership, your propensity to go straight at problems and confront them directly,” House said. “I wish we had more straight shooting like that.”

House’s status has been a question for months, since his term expired June 30 without Malloy’s nominating him for another term or announcing a successor. Under state law, House could continue so long as a successor was not named and confirmed. Caron’s term expires in 2017.

In the memo, the commissioners gave mixed reviews to the administration’s reorganization and merger of the regulatory authority with the former Department of Environmental Protection, noting that its staff fell from about 150 when it was the old Department of Public Utilities Control to about 60 as the new Public Utilities Regulatory Authority.

“PURA’s starting lineup is capable of outstanding work, but it lacks bench strength,” they wrote.

They also asked for a revision to the Freedom of Information Act, noting that the commissioners now are legally barred from discussing rate cases and other matters unless they are at a public meeting. The law was later changed, allowing two commissioners to converse privately about PURA business.

Before the reorganization, there were five commissioners, and informal discussions were permissible among two of them. With only three members, every time two commissioners are together they constitute a quorum, meaning any discussions must be held at publicly noticed meetings.

“The inability of commissioners to deliberate current business is impractical and wrong in theory,” they wrote. “The authority decides complex legal, economic and technical matters that impact every household in the state.”