From prison to freedom: ‘Our goal is to bat a thousand, but obviously that isn’t going to happen’ 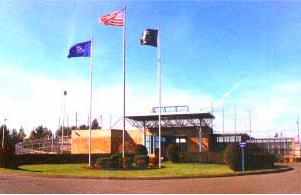 Edwin Glass departed this prison in Enfield after serving 93 percent of a five-year sentence.

Edwin Glass went to prison for robbery in late 2011 with the reasonable expectation of serving 51 months of a 60-month sentence, the 85-percent standard for a violent crime in Connecticut. He ended up doing 93 percent, or 56 months.

So, when the gate clicked open in front of Glass, now 35, at a medium-security prison in Enfield on July 27, did a lenient system of “good-time credit” free him four months early? Or did a tough system impose nearly five months extra for a gang affiliation and disciplinary tickets for swearing and self-mutiliation?

The answer to that question became a political issue after East Hartford police arrested Glass on Sept. 9, accusing him of breaking into a woman’s home five nights earlier, tying her hands behind her back, groping her and threatening to rape and stab her, before fleeing with her money. Had he served the maximum, Glass would not have gone free until late next month.

Len Suzio of Meriden, a Republican trying to reclaim a state Senate seat he won in a special election in 2011 and lost in 2012, said the arrest of Glass supports his longstanding position that everyone convicted of a violent crime or drug dealing should serve every day of their maximum sentence behind bars.

“My focus is on criminals who have committed violent crimes,” said Suzio, who is fighting the Department of Correction for data that he says would show some prisoners go free too soon. “I believe someone who has committed a violent crime should not be eligible for early release.” 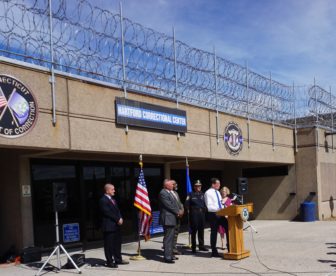 Scott Semple, second from left, joined the governor on Sept. 9 to talk about a prison milestone on the same day Edwin Glass was arrested and detained in the jail behind them.

“Every day the current early release program continues is a disgrace to the sacrifice and service of law enforcement and corrections officers who have risked their lives and well-being to bring violent and serious criminals to justice and keep them where they belong — behind bars,” Somers said.

Demands to eliminate or severely curtail what are generally known as “good-time credits” — in Connecticut, they are “risk-reduction earned credits” — run counter to the policies of most states and to research showing the recidivism rate is highest among inmates who serve 100 percent of their maximum sentences.

“I feel comfortable saying that the worst-case scenario is a straight end-of-sentence situation with no management obligation, either from probation or parole,” said Scott Semple, the correction commissioner of Connecticut.

Good-time credits are viewed as essential by prison officials and researchers as incentives for inmates to both obey the rules in prison and to prepare for what inevitably comes to the vast majority of offenders: the day they go home. They are harder to earn in Connecticut than in many states.

In Alabama, for example, inmates can shave 75 days off their sentences for every 30 days they serve. Under previous administrations in Connecticut, inmates serving long sentences could earn up to 15 days credit every month. The 2011 law authorizing the risk-reduction earned credit program under the administration of Gov. Dannel P. Malloy limited the credits to no more than five a month, with inmates convicted of a half-dozen violent crimes barred from the program.

In February, Semple further tightened the rules to peg how many credits an inmate could earn to their security assessment. Only the lower-risk inmates could earn five days, with a maximum of four days in a medium-security prison and three days in a high-security facility. Under the original rules, no credits were awarded for time an inmate is placed in a “security risk group,” a status assigned to prisoners with gang affiliations.

Semple said an inmate can move to a lower security level by meeting goals in their “offender accountability plan,” which might include earning a high-school degree, completing counseling or other programs dealing with addiction or job-readiness, or breaking free of a gang.

“If someone is going to fail, I’d rather have them fail under the umbrella of the department, while they are being managed,” Semple said.

As a gang member in prison for the seventh time, Glass was ineligible for risk-reduction credits until he completed a multi-step program that requires inmates to renounce their gang affiliation, take various courses and eventually share a cell with an inmate who had been a member of rival gang, Semple said.

He earned 167 days of credits, but he forfeited 45 for disciplinary tickets, including one for self-mutiliation, which Semple says could have been a self-administered tattoo, and another for swearing. That left him with 122 days of credits, or about four months off a five-year sentence, which included 100 days he served in jail awaiting sentencing. 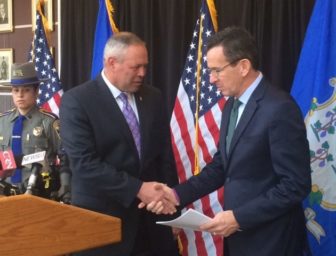 Glass, who was serving time for the robbery of a small grocery store in Hartford in 2011, was one of about 10,000 inmates in Connecticut and 750,000 in the U.S. who will go free from prison this year. In Connecticut, Glass was one of more than 4,000 former inmates still under the supervision of the Department of Correction as a condition of their release.

“I go to sleep every night hoping the 4,000 or so out under DOC supervision don’t make a headline,” Semple said. “Our goal is to bat a thousand. Obviously, that isn’t going to happen in most instances when you’re dealing with risk management.”

Glass was deemed to require a high level of supervision upon his release: reporting every two weeks to a parole officer, plus periodic drug testing. He found a job on Aug. 22, less than a month after his release. On Aug. 9, he tested negative for a broad array of drugs, including acid, amphetamines, barbiturates, cocaine, Ecstasy, fentanyl, heroin, marijuana, methamphetamine and oxycodone, among others. He was not on GPS monitoring.

On the night of Sept. 4, a man broke into the home in East Hartford, keeping the woman who lived there captive for about a half hour. Police said DNA recovered at the scene on bits of latex, apparently from gloves the man wore, led them to arrest Glass on Sept. 9 and jail him at Hartford Correctional.

It was the same day and the same jail where Malloy had Semple join him at a press conference to celebrate Connecticut’s prison population briefly falling below 15,000 inmates for the first time in nearly 20 years, a drop Malloy attributed to the bipartisan passage last year of reforms aimed at reducing incarceration without compromising public safety.

“Our prison population is now down nearly 25 percent from its all-time high of 19,893 inmates in 2008,” Malloy said that day. “Connecticut is leading the way nationally in reforming the criminal justice system.”

The arrest of Glass made the news days later. In a story published Sept. 13, the Journal Inquirer reported the arrest and details of Glass’s criminal record. WFSB followed with a story on Oct. 3 that quoted Suzio accusing the Malloy administration of urging police not to talk about the case.

But in a subsequent interview with CTMirror, Suzio conceded he had only generalities and rumor to back up his claim of a coverup.

“I got a call from the East Hartford P.D. ‘Word around here is somebody from the Malloy administration came over.’” Suzio said, quoting a tipster. No one gave him the name of any administration official who asked that the case not be discussed with the press, he said.

Senate Minority Leader Len Fasano, R-North Haven, whose caucus sees Suzio and Somers as central to either narrowing the Democratic Senate majority or gaining the four seats necessary for a GOP majority, said after a meeting with Semple last week he understands the need for good-time credits as incentives for inmates to behave in prison and to prepare for life after incarceration.

“I think one of the better commissioners picked by Gov. Malloy is Commissioner Semple,” Fasano said.

He praised Semple for the changes instituted in February and for further revisions the commissioner is considering. Semple said the underpinnings of the program are sound, but review and possible revisions will continue.

“We actually are very conservative as to how we apply those credits,” Semple said. “Based on this incident here, we may want to evaluate if there is anything else we can do.”

Despite an uptick in homicides, overall violent crime dropped again in Connecticut in 2015, outperforming most of the country for the second consecutive year. The prison population and recidivism rate also are falling.

“We’re in a good scenario right now to impact recidivism in a positive way,” Semple said. “There are very few systems in this country that can say that not only have they lowered recidivism, but they have also lowered incarceration. There aren’t a lot of states that can say that.”

Malloy said critics ignore that violent offenders do more time in Connecticut than they did under the laws and policies in place during previous administrations.