Navy Secretary Mabus drops in with a medal for Malloy 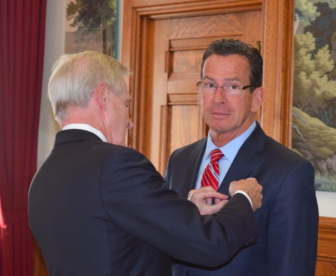 Navy Secretary Ray Mabus met late Wednesday afternoon with Gov. Dannel P. Malloy in a hastily scheduled visit to the State Capitol to give the governor the “Navy Distinguished Public Service Award” for the state’s support of the Navy and Marines during Malloy’s tenure.

It may have been for public service, but there was little public about the visit while Mabus was in the building. Malloy said he learned late Wednesday morning that Mabus might be stopping by, with his staff asking there be no publicity.

“It was a little unusual. It was very nice,” Malloy said Wednesday evening after the secretary had departed, leaving a medal, a citation, a few photos and a video the governor’s office posted on YouTube.

A sizable security detail accompanying Mabus, a former Democratic governor of Mississippi, was spotted at the Capitol, where the secretary took a brief tour with Malloy. The governor showed Mabus the bowsprit of the U.S.S Hartford, the ship associated with  the most famous quotation in U.S. Naval history: “Damn the torpedoes!”

Mabus was in Connecticut for a meeting in Groton, home to Electric Boat and the submarine base.

Malloy’s office later provided photos of a brief ceremony in the governor’s office. In one, Malloy appears slightly sheepish as Mabus pins a medal on his suit coat. Mabus jokes that he expects the governor to wear it.

The Navy is an important factor in the economy of Connecticut, where Electric Boat produces nuclear submarines and Sikorsky Aircraft is negotiating a contract to produce about 200 CH-53K King Stallion helicopters.

The Malloy administration recently won bipartisan passage of economic incentives or Sikorsky to produce its next generation of helicopters at its Stratford plant, reinforcing the state’s role in aerospace and defense.

The citation presented by Mabus, along with a medal, noted Malloy’s role in helping negotiate funding for infrastructure improvements at the submarine base in Groton and a dry dock facility at nearby Electric Boat to repair subs, and the state incentives he obtained for Sikorsky to produce the King Stallion in the state. The Navy is the customer for the King Stallion, which will be used by the Marines.

The Navy Distinguished Public Service Award is an award established in 1951 and is presented by the U.S. Secretary of the Navy to civilians for heroic acts or outstanding service of substantial, long-term benefit to the Navy, Marine Corps, or Department of the Navy.

Earlier Wednesday, Mabus delivered a speech at the National Press Club in Washington summarizing his seven years as secretary, the longest tenure of any Navy secretary since World War I.

Mabus sat down with CT Mirror in August to address Navy issues relevant to Connecticut and reflect on his time as secretary. In the interview Mabus said the Navy, which then numbered 273 ships, had a goal of 308 ships by 2021.