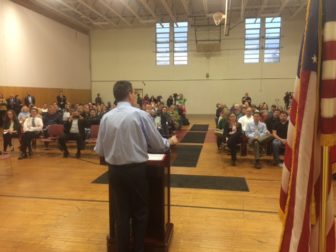 Gov. Dannel P. Malloy listens to homeowners with crumbling foundations at an open forum in Enfield in March.

Washington – Though it wasn’t an official reply, a Federal Emergency Management Agency spokesperson reiterated Thursday that the plight of homeowners with crumbling foundations does not appear to qualify for aid.

“The Stafford Act authorizes FEMA to provide aid to state and local governments and to individuals and business affected by a major disaster or natural catastrophe.

Gov Dannel Malloy wrote FEMA Director Craig Fugate on Wednesday for help assessing the damage caused by concrete used in foundations that contained pyrrhotite, a mineral that corrodes when exposed to water. That reaction should qualify the situation as a natural disaster, the letter said.

The governor said there was a similar issue in a region of Quebec, Canada. “There the federal government contributed to a program of remediation,” Malloy said.

He said the damage caused by the faulty foundations in Connecticut could cost anywhere from $100 million to $1 billion to repair, depending on the number of homes and commercial buildings affected

Malloy said at least 582 Connecticut homes have suffered damage, a large enough number to qualify for individual assistance, or cash payments from FEMA. But for that a disaster declaration must be issued by the president.

Malloy wants FEMA to establish an office in Connecticut to help test as many as 34,130 homes that are potentially at risk.

FEMA turned down Malloy’s request for help in April, saying the crumbing foundations appeared to be a consumer product or construction safety issue “similar in nature to the 2010 Chinese drywall issue in Florida,” not the type of major disaster that would open the door to FEMA’s help.

Still, the governor’s administration is hopeful.

“We look forward to hearing from FEMA on this,” said Malloy spokesman David Bednarz.