For dyslexia, politics takes the day off in Hartford 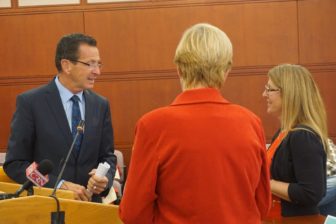 No, a truce has not been called two weeks before Election Day. Fasano still hopes voters topple the Democratic majority in the Senate and strengthen the GOP’s hand to fight with the Malloy administration over the budget next year.

But legislators of both parties took pains at a forum on dyslexia to talk about how they crafted bipartisan legislation addressing learning disabilities in each of the past three legislative sessions.

“A good idea is a good idea and a bad idea is a bad idea, no matter who presents it,” Fasano said after a forum hosted by Osten, who presented Malloy and Fasano with certificates of appreciation for their work on dyslexia. “The public needs to know, if it’s a good bill, we don’t let politics get in the way of a good resolution.”

A series of bills passed by the General Assembly increased the early screening of children for dyslexia and mandated better training for teachers to help dyslexic children learn to read, the childhood task that once seemed impossible to Malloy.

Malloy’s severe learning disabilities went unrecognized in elementary school, where one teacher labeled him “mentally retarded” and another used to display his failed spelling tests on the classroom wall. He credits his mother, a public health nurse, with finding ways to teach him to learn, always focusing on what he could do, not what he couldn’t.

“Gov. Malloy is a role model for everyone who faces challenges in learning, and if he has set anything, he has set a work ethic and a dedication that shows no matter what the disability is, you can overcome it,” Fasano told the audience Monday after Malloy departed.

In a book published by the Yale Center for Dyslexia & Creativity, Malloy’s mother is described as sending him to bed with a radio, letting him listen to news and other programs, a habit that helped him develop speaking and listening skills that would serve him in high school and college.

“The most important thing you can do for your children, our children, is make sure they love themselves,” Malloy told the parents Monday. “Because if you don’t love yourself, it’s hard to love someone else. If you don’t grow up with a truly intact personality — understanding who you are, and what you are, and where you fit in — then life is going to be difficult.”

Malloy was admitted to Boston College, despite poor SAT scores. He never learned to write well — the governor still doesn’t communicate by email or text message — but his reading comprehension steadily improved. He wrote papers orally, dictating them to the girlfriend who would become his wife, Cathy Malloy.

“What you need to do is dwell on the strengths, not the weaknesses,” Malloy said. “Work on the weaknesses, but don’t dwell on them. Make sure you’re giving your child, your grandchild, your nephew or niece as many avenues to feel successful as are possible. If you do that, you’re all going to be better off.”

Malloy is frequently asked to speak about dyslexia, most recently at a conference at Harvard. On Sunday night, he met for an hour with the parents of a dyslexic son.