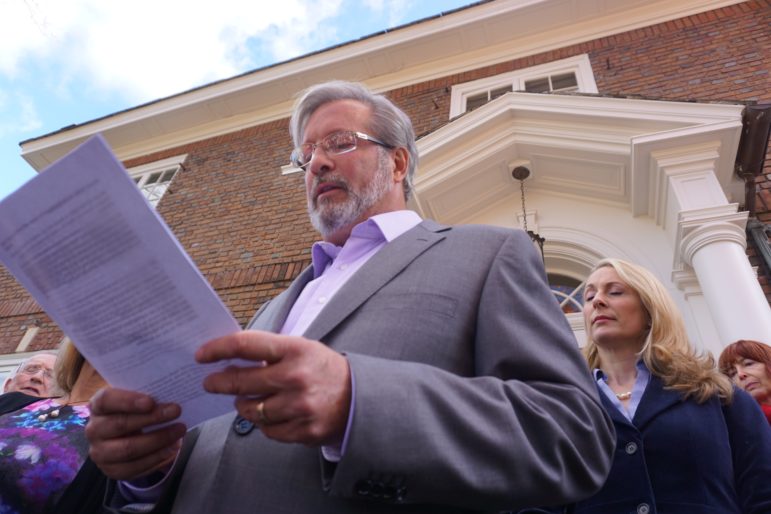 William Petit reading a statement accusing Labor United of libel. At right is his wife, Christine.

Plainville — A union Super PAC trying to help re-elect Democratic state legislators by mocking Donald J. Trump’s insensitivity to women scrambled Wednesday to defend its digital attack ad against Dr. William Petit, a home-invasion survivor who raises money for women’s groups in the memory of his murdered wife and daughters.

Petit conducted a press conference outside his front door with House Minority Leader Themis Klarides, R-Derby, and called the ad a libel that should be retracted, placing Labor United for Connecticut, the PAC responsible for the ad, and his Democratic opponent on the defensive less than two weeks before Election Day.

His neighbor and opponent, state Rep. Betty Boukus, D-Plainville, stepped forward as Petit concluded his press conference and wrapped the taller Petit in an awkward hug as photographers clicked away, then she faced reporters, denounced the ad as “horrific” and seconded his call for its retraction.

The head of the Connecticut AFL-CIO called the ad insensitive and made clear that the statewide labor federation was not among the financial backers of Labor United.

Labor United agreed to withdraw the version of the ad with Petit.

“We’re going to pull the ad from his district,” Paul Filson, the political director of Service Employees International Union and the treasurer of the PAC, told the CT Mirror minutes after Petit ended his news conference.

The episode illustrated the dangers posed to candidates by supportive independent expenditure groups, some of whom employ aggressive tactics that undermine their allies. In the case of Labor United, it plugged Petit’s name into a cookie-cutter spot designed to use some of the insults Trump has heaped on women against down-ballot Republicans.

It was a digital spot tailored to pop up in the online news and social-media feeds of voters in the district. The ad appeared as Christine Petit, a photographer who married the widowed doctor in 2012, was looking at her smart phone Tuesday as her husband played with their young son, William.

Anyone who clicked on the ad was directed to Labor United’s web site that portrayed Trump and Republicans as bad on policies affecting women and families, including paid family leave and paid sick days. As are many digital ads, its was a provocative come-on designed to entice readers to click through to a more sedate landing page.

“We stand by these accountability efforts and call on Republican candidates to disown Donald Trump and his damaging policies,” Filson said later in a prepared statement. “That said, the post in this particular district was set to expire today, and it will not be renewed.”

He later issued a stronger statement of regret: “We can only imagine the pain that Petit has gone through, and would never target his loss for our political agenda. It is not intended to reference any personal history.”

The spot was based on guilt-by-association politics, a technique employed by both parties. In fact, as Klarides complained that a staple of Democratic campaigns this year is to link Republicans to Trump, she quickly suggested that Democrats bear responsibility for the labor ad, since those unions support Democrats.

Labor United has spent $92,962, including $48,750 it paid to DKC, a public-relations and advertising firm in New York City. It had $99,037 in available cash as of Tuesday. Its biggest backer are SEIU-affiliated unions, which provided $90,000. Others include the Connecticut Police and Fire Union and a union representing state university professors.

Petit became a target because his race against Boukus is competitive. He said he has not endorsed Trump.

Petit said he is certain he is not voting for Hillary Clinton, but he is unsure if he is voting for Trump, saying he is offended by the brash candidate’s statements about women, including his suggestion that as a rich celebrity he can grope or kiss any woman at any time.

The ad’s phrase, “Petit’s attack on woman and families” galled him for reasons beyond the fact that his wife, Jennifer and daughters, Hayley and Michaela, died violently.

The family foundation he established in their memories has focused on programs supporting education, especially for girls and young women interested in the sciences, as was his oldest daughter, Hayley. It also has supported non-profits that assist victims of domestic violence.

“I worked over the past nine years to honor the memory of my family, and the whole mission of what we do, we tried to come up with programs that we felt would honor Jennifer, Hayley and Michaela, would be things they would want us to do,” Petit said. “And for a shadowy political organization to blatantly ignore that work and publish a despicable ad is reckless.”

Representatives of organizations that have received money from his family foundation stepped forward to talk about Petit’s support.

Petit later said, “I think what’s in that ad is libel.”

“This is horrific. We do not function like this in the town of Plainville. I have known the Petit family forever,” she said. “It’s a clean race. I run for the position. I do not run against anyone.” 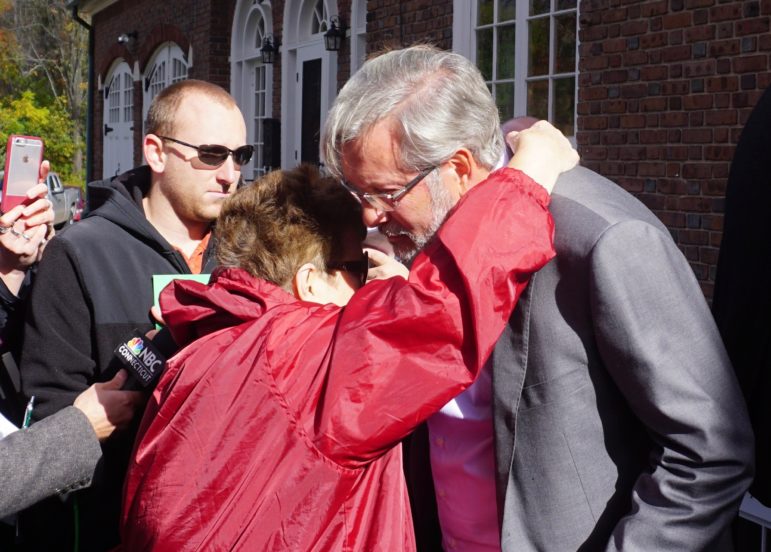