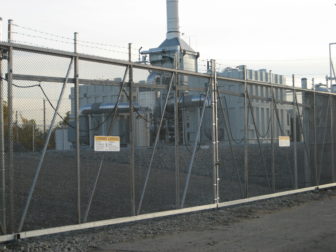 A 2.8-megawatt fuel cell in Bridgeport.

Washington — Connecticut’s fuel cell industry, one of the most robust in the nation,  is up against a powerful coalition that includes the Koch brothers and other conservative interest groups who want to end an important tax break for the industry.

The showdown over extending the federal fuel cell tax incentive will occur after the elections, in a lame-duck session of Congress. It will also affect similar provisions for geothermal heat pumps.

“We have a commitment from the Republican leadership that the fuel cell tax credit will be permitted to go forward this year,” said Sen. Richard Blumenthal, D-Conn.

But despite the promise from GOP leaders and support from Connecticut lawmakers, the future of the tax break  that shores up a key industry in the state is cloudy.

Koch Industries has a huge stake in the oil industry through, among others, the Koch Pipeline Company. It transports crude oil, natural gas and other products through 4,000 miles of pipelines.

“The $1.4 billion in expiring tax provisions currently under consideration — pertaining to geothermal heat pumps, fuel cell facilities, and combined heat and power (CHP) properties— are a distortion of the tax laws for special interests in the renewable energy industry…” the groups’ letter said.

Adam Forni, a senior analyst at Navigant Research, said the end of the incentive would hurt the industry.

“The credit is worth around $0.02 per kilowatt-hour  over the project lifetime, a substantial amount that often decides whether the project is worth building,” Forni said. “Without the credit, fuel cell manufacturers face greater challenges in getting this industry off the ground.”

He also said Connecticut is among the top  states, besides Massachusetts, New York and California, in the production of fuel cells.

Joel Rinebold, director of energy at the Connecticut Center for Advanced Technology, called Connecticut “the Silicon Valley of fuel cells.”

He said the industry employs 3,000 people and generates $600 million a year in revenues.

“I can appreciate that there’s an interest in not spending money [on tax incentives,] but we look at these tax credits as an investment,” he said. “Without some assistance, these companies may very well scatter.”

The 14.9 megawatt fuel cell power plant in Bridgeport. It was built by Fuel Cell Energy of Danbury.

Congress extended similar tax credits for solar and wind at a cost of $23.8 billion over the next decade when it passed a huge omnibus spending package last December.

The goal was to end the expiration of certain tax breaks at the end of every year or every couple of years. These tax breaks were usually extended by Congress, but the process created  uncertainty for businesses and utilities that want to use renewable power.

Several lower-profile energy tax provisions were excluded from last year’s deal, however,  including investment tax credits for geothermal heat pumps, fuel cells and combined heat and power systems. Also left out was a proposal to extend renewable fuel infrastructure credits to benefit advanced forms of ethanol and other alternatives to gasoline.

The tax incentives for fuel cell vehicles and hydrogen infrastructure expired at the end of last year, while the fuel cell investment tax credit for stationary fuel cells will end on Dec. 31.

An attempt to add those tax breaks to a Federal Aviation Administration bill failed this summer. But GOP leaders promised to take up those incentives later in the year.

Fuel cells take hydrogen – usually from natural gas – and combine it with oxygen from the air. The reaction creates electricity and the only emissions are water.

The biggest fuel cell company in Connecticut is Danbury-based FuelCell Energy, which was founded in the late 1960s.

The technology will allow Pfizer to provide electricity and steam-powered heating to its 160-acre  research and development facility in Groton.

There’s also a 14.9 megawatt fuel cell facility in Bridgeport, helping provide power to the city; and hopes for a large, stationary fueling center in Beacon Falls.

Doosan Fuel Cells, a Korean company, also has a presence in the state with a facility in South Windsor.

Rinebold says there are as many as 600 companies in the supply chain as well.

“It’s an alternative source of energy and it’s clean energy,” Blumenthal said. “Despite all the opposition from the special interests representing the fossil fuel industry, [fuel cells] are a clean alternative for our future.”

Efforts to make the fuel cell tax break more permanent have also failed in this Congress.

Last year,  Rep. John Larson, D-1st District,  introduced a bill that would extend thel tax break through 2021. He says the incentive is needed to make it easier to develop and use fuel cell and hydrogen technology “and provide the certainty that such investments remain affordable and accessible for all.”