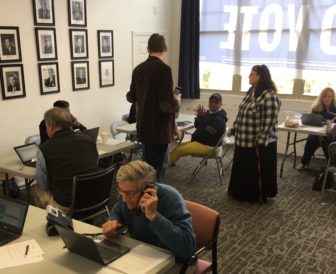 Volunteers at a Democratic phone bank in Hartford.

On the last weekend before voters go to the polls, the same question gnawed at Republican Andrew Falvey in Cheshire and Democrat Laura Bartok in Bristol, each a candidate in competitive state House districts. Were their presidential nominees a help or hindrance to them and other down-ballot candidates?

Falvey, 55, says standing behind many of the 4,000 doors he’s knocked on in recent months were voters turned off by a presidential race between two of the most unpopular major-party presidential nominees since the advent of polling, Republican Donald J. Trump and Democrat Hillary Clinton.

“They say, ’I’m so fed up I don’t want to vote for either one,’ ” said Falvey, a former school board and town council member seeking an open seat in the 90th House District. “I tell them, ‘Please, at least come out and vote for the rest of us.’ ”

Not far away in Bristol, it is a sentiment familiar to Bartok, 32, a former congressional and state legislative aide trying to unseat Republican Cara Pavalock in the 77th House District. She said, “I’ve heard over and over again, I don’t know what I’m going to do at the top of the ticket.”

Falvey campaigned Saturday with other Republicans, including Dan Carter, the long-shot Republican candidate for U.S. Senate, who keeps clothespins in his pocket stamped, “TRUMP 11.8.16.” Smiling, Carter says he occasionally hands them out with the instruction, “Hold your nose and vote.”

It’s been that kind of season for down-ballot candidates, many of whom say they still don’t have a handle on exactly who will turn out on Tuesday — and what they will do when they get there. Will they vote for Clinton or Trump and go home? Will they turn out at all?

Murphy knows well the door-to-door brand of retail politics being practiced by Bartok, who worked for him when he was a member of the U.S. House, and by Falvey. Murphy, who lives in Cheshire, was elected to the state House in 1998, the state Senate in 2002, and the U.S. House in 2006.

“I think if you are a Republican or a Democrat at the local level, you have to carve out your own space,” Murphy said. “I think the candidates who are able to bring their case door to door are going to do very well.”

Democrats see Trump as a greater threat to Republicans, just as Republicans see the unpopularity of Gov. Dannel P. Malloy, a Democrat not on the ballot, as a drag on Democratic candidates for the General Assembly.

Liz Linehan, a Democratic councilwoman competing with Falvey for the 90th House seat, has distanced herself from the governor with a mailer that depicts her standing, arms crossed, with the message, “Whenever I have to, I’ll stand up to Governor Malloy.”

Malloy, who toured some of the Democratic get-out-the-vote offices over the weekend, said he is not offended by such positions, but he says most legislative candidates stand or fall on their local issues, the makeup of their districts and and their willingness to identify and turn out their vote.

Two years ago, he noted, the GOP gained 10 seats in the House, outperforming the Republican gubernatorial nominee, Tom Foley, who lost to Malloy. In 2012, Republicans didn’t lose any seats, despite President Obama’s winning 58 percent of the vote. 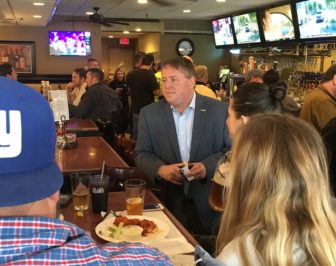 Dan Carter, a U.S. Senate candidate with no budget, campaigning in Southington.

House Minority Leader Themis Klarides, R-Derby, and Senate MInority Leader Len Fasano, R-North Haven, share one message with Democratic legislative leaders — that voters should pay as much attention to the races for General Assembly as they do for president.

But Democrats and Republicans disagreed over presidential momentum in Connecticut, a blue state where neither Trump nor Clinton are spending resources.

“People are responding in ways that we don’t normally see,” Malloy said. “I mean, for us to be able to run 18 centers is really quite unbelievable.”

Blumenthal, who was vastly outspent by Republican Linda McMahon in 2010, is the only Connecticut candidate with a significant television ad budget in 2016. Carter had raised $344,634 and spent $317,794 through Oct. 19, compared to the $7.16 million raised and $4.12 million spent by Blumenthal.

“It s been very difficult, the money part,” Carter said. “A lot of the Republican establishment sat it out, so the funding was really hard. I knew I had to do more with less.”

Carter campaigned on Saturday with Falvey, Rep. Rob Sampson, R-Wolcott, and Sen. Joe Markley, R-Southington, at Spartan II, a pizza restaurant and bar in Southington, going from table to table.

“One vote at a time,” Carter said.

Carter met some former employees of PTR, a Bristol gunmaker. They appreciated his vote in 2013 against the post-Newtown gun control bill, which banned portions of PTR’s product line, a factor in its relocation to South Carolina.

But they couldn’t vote for him.

They moved to South Carolina with PTR and were only in Southington on a visit, despite their being laid off from PTR.

On Sunday, Murphy called Bristol an important player in determining whether Democrats will retain their longstanding majorities in the General Assembly.

In the nine most competitive state Senate races, Democrats are defending six seats. The 31st District seat held by Sen. Henri Martin, R-Bristol, is one of the three GOP seats Democrats think they have a chance of flipping. In addition to Bartok’s bid to recapture what was a Democrat seat until two years ago, there also is an open House seat in Bristol.

Senate Majority Leader Bob Duff, D- Norwalk, and two senior staffers sat with two dozen volunteers making calls Sunday for Michael Nicastro, one of the Senate candidates whose success or failure will determine if Duff still has a Democratic majority to lead.

During a break, Duff told the volunteers their work is necessary to coax presidential voters to cast votes for the rest of the Democratic ticket on Row A, the top line of the ballot.

“Go sing to your friends and your family, ‘Go Row A, all the way.’ And get out there and tell them, they must go, ‘Row A, all the way,’ ” Duff said, pretending to be a choirmaster. “Practice a little bit. We’re going to go —“

Duff smiled and told them, “We’re going to have another rehearsal tomorrow.”