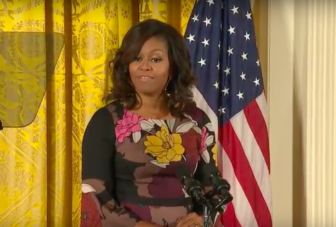 Gov. Dannel P. Malloy made a post-election visit to the White House on Monday for a summit on veterans’ homelessness that ended with a wistful plea by First Lady Michelle Obama for the administration of President-elect Donald J. Trump to continue a successful local, state and federal partnership to address homelessness.

“It is definitely possible to continue this work from one administration to the next,” Obama said to applause. “And I fully expect that to happen with the transition to our next president, as well as with all the mayors and governors and other elected officials out there who are going to be transitioning in the coming years.”

As governor of the first state certified to have eliminated chronic homelessness among veterans, Malloy was a featured speaker at a White House event held while the Obama administration is simultaneously winding down, framing its legacy and lobbying to ensure that at least some policies will survive the transition in administrations.

The first lady cast ending veterans’ homelessness — a goal that the president set in 2014 and has been reached in three states and 85 communities — as an issue that every administration should embrace. She issued a subtle challenge to Trump that veterans deserve more than speeches.

“They never should be content again with soothing platitudes or empty words, and what we’ve all achieved so far should be just the beginning,” Obama said. “This is just one step. We should expect that any presidential administration that comes after us — God, I hope they far surpass what we’ve accomplished. I want to look back in eight years, in 12 years, 20 years and say, ‘Man what we did back in the Obama administration, we only scratched the surface.’ ”

She invited Trump to rebrand the effort, which the Obama administration called “Joint Forces.”

“Name it after whatever you want. We have no pride in credit,” Obama said, addressing an audience in the East Room, where Malloy sat in the front row. “We just want the bar to be high. That’s what folks should expect from their commander-in-chief and from all their elected officials.“ 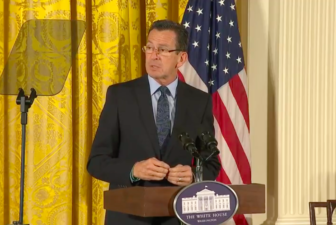 She and Malloy each said achieving an end to chronic homelessness does not mean no veteran will go homeless; it means having the programs support them and quickly find permanent housing.

“Let me be very clear, we are going to have veterans who fall into homelessness,” Malloy said. “It’s going to happen, and it does happen in our own state, but we have a very clear path to getting folks initial housing, interim housing and permanent housing within 90 days. That’s what we’re doing.”

Malloy, who was invited to the summit planned when Hillary Clinton was favored to win the presidency and provide continuity on a range of domestic policies, also was mindful of the transition as he said that Connecticut’s success in addressing homelessness could not have come without renovating thousands of units of uninhabitable public housing.

“I hope that will be part of the next administration’s infrastructure investment plan,” Malloy said to applause. “Housing needs to be a key part of that investment.”

The summit comes as polls show Americans with little faith in government, and Malloy and Connecticut legislators are preparing for a difficult debate next year over what are the core functions of government in an era of chronic fiscal crisis.

Malloy said in a telephone interview that the mood in Washington and the White House was understandably unsettled, particularly among the young staffers who expected to remain in government. In a “60 Minutes” interview aired Sunday night, Trump stepped back from campaign promises about mass deportations of undocumented immigrants and the repeal of Obamacare. The governor compared the mood to 2000, when Vice President Al Gore won the popular vote, as did Hillary Clinton this year, but lost the electoral college and the presidency.

“Everyone is waiting to see. If I had to tell you the difference between 2000 at this point and now, the Republicans don’t know what’s coming either,” Malloy said. “They are like, ‘Wait and see.’ It’s not like this is a well-vetted and well-explained agenda.”

As an aggressive surrogate for Clinton, the governor did not stint in his criticism of Trump during the campaign, questioning the fitness for office of a brash billionaire who is about about to become the first U.S. president without holding office or having significant military experience. The last U.S. president without prior elective experience was Dwight D. Eisenhower, the supreme allied commander during World War II.

But Malloy has been measured in his comments since Trump’s upset victory, echoing the president and others. He said Trump deserves time to organize a new government, and the man he observed during the “60 Minutes” interview was trying to make the jump from candidate to president-elect.

“I think there is an attempt to modify behavior and expectation and do them both at once,” Malloy said. “Listen, I can’t imagine what it is like to wake up and know you are responsible for the future of millions and millions of lives. I’ve got 3.5 million people I have to worry about. He’s got the whole world.”

Malloy said he is waiting to see what Trump’s policy priorities are.

“I think it’s early,” Malloy said. “I’m prepared to bite my tongue until there is a policy I disagree with.”