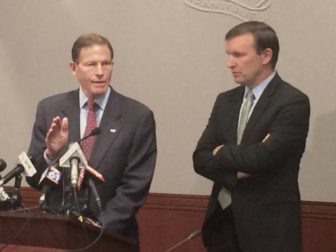 Senators Richard Blumenthal, left, and Chris Murphy, discuss their priorities for the lame-duck session of Congress at a news conference Monday.

Washington – Congress returns to work this week for a lame-duck session aimed at trying to set aside partisan differences long enough to keep the government from closing.

Connecticut’s Democratic senators also hope some of the state’s priorities will survive in the next six weeks. Top among the concerns is military spending, which is key to the state’s defense industry. But the path forward on that is not clear.

Sen. Richard Blumenthal, D-Conn., said he hoped Congress will approve a final National Defense Authorization Bill (NDAA) that would clear the way for spending on Sikorsky made helicopters, F-35s fighter planes whose engines are made by Pratt & Whitney, and submarines made by Electric Boat. The bill also would bolster the fortunes of dozens of defense subcontractors in the state.

“There is no excuse for this bill not to go forward,” Blumenthal said at a news conference in Hartford on Monday.

The reason there’s been a holdup in the $602 billion NDAA is that House conservatives insist a final bill contain a provision President Obama and Senate Democrats say would undercut protections against workplace discrimination based on sexual or gender orientation.

Now that Donald Trump is president-elect, Republicans may be willing to compromise, knowing the issue could be revisited next year.

Blumenthal said the last weeks of the 103d Congress is “known as the lame duck but there is no reason it should be lame.”

Sen. Chris Murphy, D-Conn., a member of the Senate Appropriations Committee, said his concern is how Congress will fund the federal government. The federal fiscal year began on Oct. 1, and the government has been running on a “continuing resolution” that will end on Dec. 9 and keeps agencies running at last year’s spending levels.

On Monday, Republicans were pressing to extend that resolution into next year, after Trump is inaugurated and perhaps into March, which would coincide with needed action on the federal debt limit.

That would put new programs – both big and small – that are important to Connecticut on hold and could derail them until 2018.

The Pentagon would not begin work on the new Columbia-class nuclear ballistic missile submarines, for which Electric Boat is the lead contractor. Nor could work begin on a new Coast Guard museum in New London that is awaiting its first congressional appropriation.

A drug bill but no TPP

On Tuesday, however, the conservative-leaning Concerned Veterans for America, will launch a major campaign to thwart efforts to move Blumenthal’s bill through the Senate.

The veterans group says that with Trump elected president, Congress should wait to pass a stronger bill that would give the next secretary of veterans affairs more power to immediately fire employees. Trump also has said he wants to expand the bill so that all veterans can see private doctors.

There may also be action on new funding for cancer research, precision medicine and treatments for opioid addiction.

However  Democratic hopes of pushing through the nomination of Judge Merrick Garland to the Supreme Court are permanently off the table.

Trump will nominate a candidate for that vacancy and Connecticut’s senators say they will support holding a hearing, and, if approved by the Senate Judiciary Committee, a confirmation vote on that candidate.

Republicans refused to hold a confirmation hearing for Merrick.

“The process should be allowed to work,” said Blumenthal, a member of the Senate Judiciary Committee. The senator said it is “part of constitutional responsibility” to consider the nomination.

But Murphy did not guarantee Democrats would support Trump’s nominee.

“According to existing rules, nothing can pass the Senate without Democratic support,” Murphy said.

The new Senate will have at least 48 Democrats and 51 Republicans, a Louisiana Senate seat will be determined in a December runoff election. That means the GOP is short of the 60 votes that would end a filibuster on legislation and nominees.

That could change, however. Democrats have changed the filibuster rule on nominees and Republicans could too.

Another thing that’s off the table in the lame duck session is consideration of a trade deal with Pacific nations known as the Trans-Pacific Partnership. Trump campaigned heavily on his opposition to the TPP, and majority support for the trade pact in Congress is not assured.

Murphy said Trump’s determination to negotiate “tougher trade deals” is “not a bad thing.” But he cautioned that Trump’s agenda as a whole may not sell well in a Democratic-leaning state like Connecticut.

“I think we have to be realistic as to what to expect,” Murphy said.