Harp: We’ll ‘fight’ back on immigration 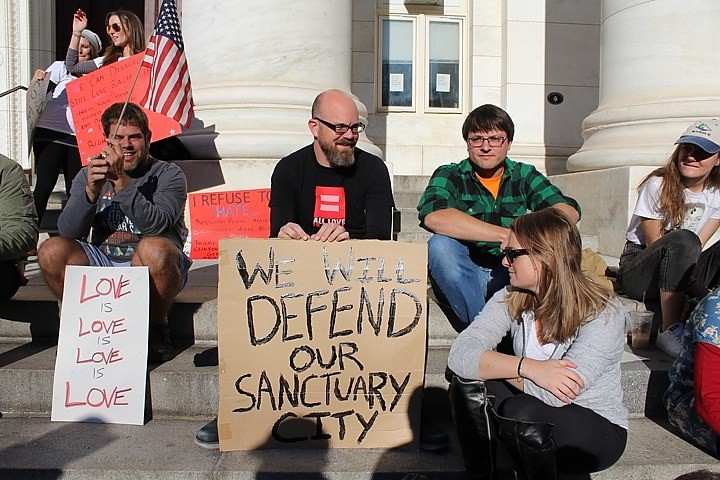 Demonstrators at a Sunday anti-Trump rally in downtown New Haven.

Mayor Toni Harp has instructed the city’s top lawyer to prepare a legal challenge in case the incoming Trump administration seeks to punish New Haven for being a “sanctuary city.”

She’s not expecting that to happen. But New Haven is prepared just in case, she said.

Harp offered that perspective in a post-election debriefing on WNHH radio’s “Mayor Monday” program.
She noted that President-Elect Donald Trump vowed at one point during this year’s campaign to remove federal funding from “sanctuary cities” — cities that embrace immigrants, including those here without documentation — as one of his first acts in office.

Since then, Trump has modified his round-em-up stance on immmigration.

And Harp did some poking around on the Internet to learn that hundreds of communities could qualify as “sanctuary cities” according to lists prepared by the federal government and immigration opponents.

No “hard-and-fast” statuary definition exists of “sanctuary city,” noted Kica Matos, who lives in Fair Haven and is director of immigrant rights and racial justice at Immigrant Rights and Racial Justice at the Center for Community Change (“CCC”). The term usually refers to “any community that refuses to carry out enforcement of immigration laws.”

New Haven has a general order directing police officers not to inquire into citizens’ immigration status when they stop them or interview them.

Harp affirming New Haven’s pro-immigrant policies at a January rally against planned federal raids.
Harp said Monday the city will continue with that approach, which she called crucial to community policing. The city will continue to “arrest criminals,” whether or not they’re immigrants, she added. 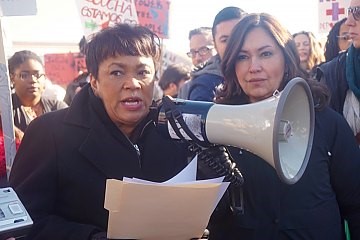 Harp learned that it wasn’t the general order, but rather a policy that does not affect federal law or specifically deal with immigration that landed New Haven on lists of hundreds of “sanctuary cities”: the immigrant-friendly municipal ID card, which since 2007 has been available to all residents. It enables people to get library cards.

“New York City is a sanctuary city,” Harp noted —and observed that both Trump and top Trump adviser Rudolph Giuliani live there. She also noted that the entire “red” state of Utah declares itself a sanctuary state for immigrants. Harp said she doubts that the Trump administration will seek to remove federal funding from hundreds of cities and entire states.

But if he picks the fight, she said, New Haven will be ready with a court challenge. She said she has asked her corporation counsel to prepare.

New Haven Republican Town Chair Jonathan Wharton said Monday that if the Trump administration acts against the city, “our committee would stand behind the federal government as we have already. It’s just going to be one of these areas where there’s a possibility of lawsuits. Immigration is federal government responsibility.” The GOP took a similar stand in its newly released local issues platform.

One fallout Harp has not doubt about from last week’s election is the change in state government: Democrats lost their majority in the State Senate and saw their majority shrink in the state House Of Representatives. Add that to what’s already a $1.5 billion projected state budget deficit, and Harp concluded that New Haven can’t expect to see new funding out of Hartford this coming year.

Instead, she’s focused on preserving what the city already receives. “We can’t lose another $5 or $10 million,” she said.

Harp attended a post-election meeting at the Connecticut Conference of Municipalities where her colleagues from other communities raised similar concerns. They discussed possible responses for the upcoming state legislative session. One idea is to ask for state permission to levy, say, a local sales tax. Another would be either to revisit the tax exemptions of large not-for-profits like hospitals and universities — or, Harp suggested, push those institutions to lobby the state to fully reimburses cities for tax revenue lost from mandated property tax exemptions. She said New Haven receives less than 40 percent reimbursement under the Payment in Lieu of Taxes (PILOT) program.

Local Headaches
Harp also addressed the widespread failures in New Haven’s handling of last week’s election.
Harp said she visited most of the city’s 40 voting precincts. “Almost every place I went to, there was a problem,” she said: Hours-long waits to vote, voting stations running out of ballots, confused poll workers.
And, in the end, the Registrar of Voters office botched the vote-counting. As of Monday morning, the city still didn’t have official ward-by-ward results in all the elections.

Technically, Harp has no authority over this process. The registrars of voters are independently elected.

In practice, her office sent reinforcement to help process the crush of last-minute voting registrants. Now, she said, the city needs to figure out, in advance, how to make the system work better next time. She recommended calling in a “LEAN” consultant — a reference to a process manufacturers use to make their systems more efficient. New Haven’s democracy could use the same help, she said.