It’s Black Friday, time for a caution from your U.S. senator 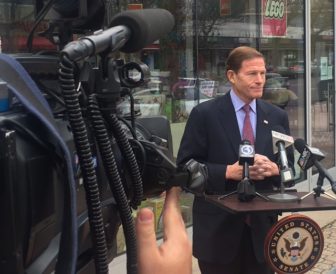 U.S. Sen. Richard Blumenthal at a portable lectern on a sidewalk outside Toy Chest,

Standing outside a toy store in West Hartford center, Blumenthal announced he was proposing legislation to ban the use of automated computer programs known as bots that frustrate consumers by quickly buying up hot inventory to resell at steep markups on eBay.

The legislation is similar to a pending anti-ticket scalping bill he co-sponsored earlier this year. It would ban the use of bots to scoop up large blocs of theater, concert and sports tickets the moment they become available online. The bill is called the “BOTS Act of 2016,” for “Better Online Ticket Sales Act.”

It was first noticed last year that scalping had expanded beyond tickets to other forms of online commerce when sold-out products quickly ended up for sale in bulk on eBay.

This year, resellers have used bots to buy the season’s hot toy, the “Hatchimal,”  a toy bird that hatches from an egg and can be trained. It goes for $59.95 at retail, but is resold on ebay for more than $200. In fact, the manufacturer’s web site offers a note of warning about price gouging by resellers.

The vigorous online market for Hatchimals.

Other than subjecting resellers to civil penalties, it is unclear how a ban on bots could be enforced, since retailers have had trouble stopping the practice. This season, some retailers have stopped selling Hatchimals online and now offer them only in stores.

Blumenthal’s opponent in this year’s Senate race, Republican Dan Carter, criticized the senator for holding press conferences on what he called relatively frivolous issues that do little but garner press attention that has made him one of Connecticut’s best-known politicians. He won re-election in a landslide, and shoppers stopped to pose for pictures with him Friday outside the Toy Chest.

Blumenthal began the Black Friday news conferences during his 20-year tenure as state attorney general, an office that lent itself to consumer-protection issues. In 2010, his last year as A.G., while he was a senator-elect, the topic was the perils of credit cards marketed to young adults. In his first year as a U.S. senator he warned about the pitfalls of layaway plans.

“It’s a way of educating consumers. On this day more than many others, consumer are focused on buying, which is a good thing,” Blumenthal said. “But some of the abuses and deceptive practices also can be exposed so that we can do something about it.”