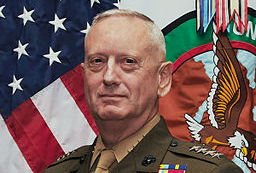 Washington –  Connecticut lawmakers in the U.S. House on Thursday helped pass a stopgap spending bill that would prevent a government shutdown – and ease the way for the confirmation of  retired Gen. James N. Mattis as the next secretary of defense – but there’s trouble in the Senate.

The House voted 326-96 for a $1.07 trillion “continuing resolution” that would fund the federal government until April 28, giving the Trump administration three months to work with Congress to draft a long-term spending plan. All five Connecticut House members voted for the bill, which would keep funding Virginia-class subs built by Electric Boat, F-135 jet engines made by Pratt & Whitney, and Black Hawks and other helicopters built by Sikorsky.

The spending bill, which keeps federal agencies funded at 2016 levels, also contains an “anomaly” that would allow the Navy to begin work on a new class of nuclear ballistic missile submarines, known as the Columbia class, which will be built by Electric Boat.

But the measure stumbled on the way to the Senate, which hoped to vote on the CR and send it to the president before the government runs out of money to operate at one minute past midnight on Friday.

Coal country Senate Democrats Joe Manchin, W-Va., and Sherrod Brown, D-Ohio, have  ground the Senate to a halt until they get a better deal from Republican leaders, who have granted only a  four-month extension of coal miner health benefits.

“Just give (the miners) a year. Don’t be inhumane with four months,” Manchin said.

Manchin and Brown have threatened to hold up a vote on the CR through procedural motions until Sunday, which means there could be a partial shutdown of the federal government over the weekend.

Mattis needs an act of Congress to make him eligible to lead the Pentagon because, under law, the defense secretary has to have been a civilian for at least seven years before taking office. Mattis retired from the Marine Corps in 2013.

The continuing resolution contains language that would expedite consideration of an exemption for Mattis from that law, but maintain the requirement 60 senators vote in favor of the waiver.