Is the F-35 stealth fighter vulnerable to a Trump tweet?

One of Connecticut’s U.S. senators insists he won’t jump at every tweet by President-elect Donald J. Trump. But the other says he could not ignore what he took as Trump’s suggestion Monday that production of the F-35 fighter, the source of thousands of jobs in Connecticut and air superiority for the U.S. and its allies, might be reduced or abandoned.

Sens. Richard Blumenthal and Chris Murphy, both Democrats, engaged in the same exercise  as many politicians, pundits and journalists: How seriously to take Trump’s bite-sized thoughts on policy that he is dispensing 140 characters at a time on a Twitter feed followed by 17.2 million people?

For the second time in recent days, Trump complained on Twitter about military procurement. After suggesting that a new Air Force One still in the planning at Boeing was too expensive, Trump took a shot at the F-35, the fighter produced by Lockheed Martin and powered by a single Pratt & Whitney engine, saying the aircraft program and its cost are “out of control” and promising billions of dollars in savings after he takes office Jan. 20.

The Trump Twitteratti went to work, looking for meaning. Was the president-elect being strategic or casual? Was he distracting the public from a news cycle otherwise devoted to questions about the role of Russian hacking in his election? Whatever the case, his Tweet about the F-35 involved a major weapons system and publicly traded companies that employ thousands of Americans.

Lockheed Martin’s stock price was down 4 percent at midday, shrinking the company’s market value by about $4 billion. It rebounded slightly, with shares down about 2.5 percent at the close of trading.

“I think this comment requires a response, because it impacts the views of the American public toward this program and the views of our allies as to our dependability in producing the aircraft,” said Blumenthal, a member of the Armed Services Committee. “They are going to be depending on it, as is every branch of our military. There are F-35s tailored to the needs of each military mission, and our military men and women should never doubt that we will continue to have air superiority.”

Murphy, 43, who took office five years years ago as the youngest-serving U.S. senator, was an early adopter of Twitter and other social media, but he said no one really knows whether there is method or mischief to Trump’s tweets.

At a cost of $100 million per aircraft, the F-35 is a tempting target. Its development has been plagued by cost overruns and delays, but it seems far-fetched as a candidate for cancellation as it is the only fighter in production, with aircraft being delivered to the U.S. military and its partners. In fact, Israel accepted delivery Monday of its first two F-35s, with 33 more to come.

Lockheed has designed three versions of the F-35: one for the Air Force that takes off conventionally; a vertical-lift version for the Marines; and a Navy version that can be catapulted off the deck of an aircraft carrier. It is an all-weather, stealth fighter with what Blumenthal says is the best ability to evade Russian ground-to-air missile systems in use by Iran and Syria. 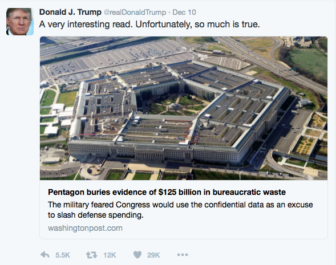 Cancellation of the program seems impossible, but Blumenthal said Trump could reduce funding and slow down production, which only would increase the cost per aircraft. Blumenthal said the Congress shares Trump’s concern about costs, and the $100 million price tag is due to drop to $85 million in 2018.

“Reducing profit margins is a worthwhile goal, just like cost cutting. It is a welcome and important effort,” Blumenthal told reporters in Hartford on Monday afternoon. “I am here because my reading of the president’s tweet is that he is contemplating arbitrary and indiscriminate cuts in the program and possible cancellation. I think that impression is well founded in the very terse and perhaps cursory remarks he is making.”

“You know, I’m, like, a smart person,” Trump told “Fox News Sunday.” “I don’t have to be told the same thing in the same words every single day for the next eight years. Could be eight years — but eight years. I don’t need that. But I do say, ‘If something should change, let us know.’”

A briefing on the F-35 might be useful, Blumenthal said.

“I hope the president-elect will take a full briefing and learn more about the facts relevant to this program before he articulates the need for indiscriminate or arbitrary cuts in the program,” he said.

Trump’s zinger at the cost of the new Air Force One was puzzling, since Boeing is now developing features for the new presidential aircraft — with no cost yet. Interpretations of the tweet ranged from a belief Trump was warning contractors to keep an eye on costs to a suggestion he was displeased by a Boeing executive’s warning that a hinted Trump trade war with China could be ruinous to the U.S. economy.

“I wouldn’t be surprised if he sends out a tweet tomorrow saying he spoke to the president of Lockheed and everything is fine,” Murphy said.

Blumenthal confessed that he does not spend much time personally checking Trump’s tweets, but they cannot be ignored.

“He’s the president-elect,” Blumenthal said. “What he says matters.”