The  Sandy Hook Elementary School shooting has been a catalyst for mobilizing family members of gun violence victims, and its anniversary has become the day to gather to support each other. They came together Wednesday – the fourth anniversary of the shootings that claimed the lives of 20 first graders and six educators in Newtown – at St. Mark’s Episcopal Church, which was filled to capacity and required an overflow room to accommodate all who attended. 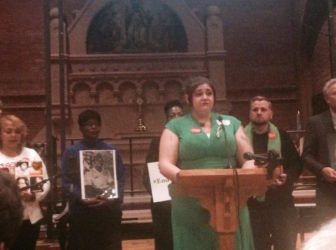 Hannah D’Avino, whose sister Rachael  D’Avino died trying to protect her students at Sandy Hook Elementary School, said it was very difficult for her to speak of her loss.

But like others among the family members of Sandy Hook’s victims, D’Avino has joined a growing group of vocal and determined gun control advocates who are facing strengthening political headwinds in this city.

“This is not easy, and we should not have to be here,” she said, addressing the crowd from the pulpit. “With each shooting there is more pain.”

D’Avino retold the story of her sister’s last day and her love for her autistic students.

“No matter how illogical it sounds, I still feel guilty to this day for not being by her side,” D’Avino said.

“I couldn’t help her but I can still fight.”

There were testimonials from more than a dozen others.

Eddie Weingart of Desert Hot Springs, Calif., told of watching his mother get shot by an estranged boyfriend when he was two and a half years old and surviving only because the rifle the shooter put in his mouth failed to fire.

Angel Santiago told of surviving the massacre at the Pulse Nightclub in Orlando, Fla.

“We are going to do everything to fight the fight,” he said.

The three-hour vigil included prayers, processions and testimonies, but it also had music.

David and Francine Wheeler, parents of Sandy Hook victim Ben Wheeler, played the piano and sang “Leave the Light On” in honor of their son, who would have been in fifth grade now.

The vigil, sponsored by the Newtown Foundation and gun control groups including the Brady Foundation and Moms Demand Action, turned political when Sen. Richard Blumenthal stepped to the pulpit.

“On the 20th of January we are going to have a new president,” Blumenthal said to boos from the attendees. “This is a president who responds to rallies, so I suggest the American people give him a big rally.”

Blumenthal said President-elect Donald Trump had the opportunity to do something “counterintuitive” and support the gun control measures promoted by the advocates.

“We’re not going away,” Blumenthal said. “We’re not surrendering; we’re not giving up.”

Sen. Chris Murphy told the story of 6-year-old Jesse Lewis, who abruptly changed the subject in a conversation with his father who was taking him to Sandy Hook Elementary School on the day the first-grader was shot.

“He said. ‘Dad, everything is going to be okay,’” Murphy said. 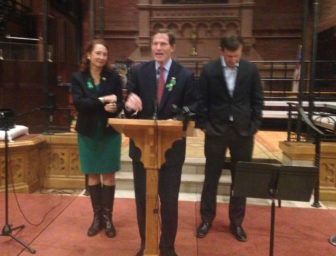 He said “more and more people in the belly of the beast,” meaning Washington, “are willing to stand with you.”

Rev. Jeremy Lucas of Christ Church of Lake Oswego, Oregon, ended the vigil with some levity.

He told the story of finding out a school was raffling off a semi-automatic rifle to raise money for a trip to California. He offered to fund the trip himself if the idea of a raffle were dropped.

“But I found out that when a raffle is started, it can’t be stopped,” Lucas said.

He said he then decided to purchase $3,000 worth of raffle tickets – and won the gun.

He said he horrified some people by telling them the only plans he had for the gun was to destroy it.

Lucas turned the barrel of the gun into a shovel – an attempt to turn “swords into plowshares.”

He gave that shovel to Po Murray of the Newtown Action Alliance to take back to Newtown.