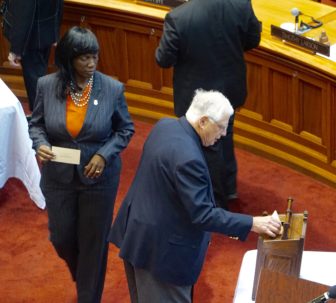 Seven electors dropped signed paper ballots into a wooden box in the state Senate on Monday, casting Connecticut’s seven Electoral College votes for Hillary Clinton and Tim Kaine, the Democrats who carried the state, won the national popular vote and lost the presidency.

A few dozen anti-Trump protesters stood vigil in the cold outside the State Capitol, some waving signs urging that the Electoral College abide by the popular vote, but their complaints lay elsewhere, with electors in the states carried by Donald J. Trump and Mike Pence.

The ceremony in Connecticut, a state that’s gone Democratic in every presidential election since Bill Clinton won in 1992, had a melancholy air. The electors accepted their roles in the hope they would be cast votes in another Clinton victory.

Following a military honor guard, Secretary of the State Denise Merrill led the electors into the chamber for a lesson in history, as well as the state’s final act in the unpredictable presidential election of 2016.

“The Electoral College is a quirk of history, but a pivotal one,” Merrill said.

State Rep. Robert D. Godfrey, D-Danbury, the elector chosen as chairman to oversee the brief ceremony, said Monday was “the real election day,” even if he is among the Americans who favor abolition of the Electoral College.

“This the first position I’ve ever held I’d be delighted to do away with and to go to direct election of president of the United States, as we do for every other elected official in the United States of America,” Godfrey said to scattered applause.

Republican State Chairman J.R. Romano and state Sens. Michael McLachlan of Danbury and Art Linares of Westbrook of Westbrook were among the Trump delegates to attend.

Merrill gave a concise history lesson: The Electoral College was a compromise struck in 1787 by those who favored the direct election of the president, albeit at a time when women and slaves were denied the vote, and those who advocated for the president to be chosen by Congress.

Each state casts as many votes as it has members in Congress: Seven in Connecticut’s case, one for each of its five House members and two senators. 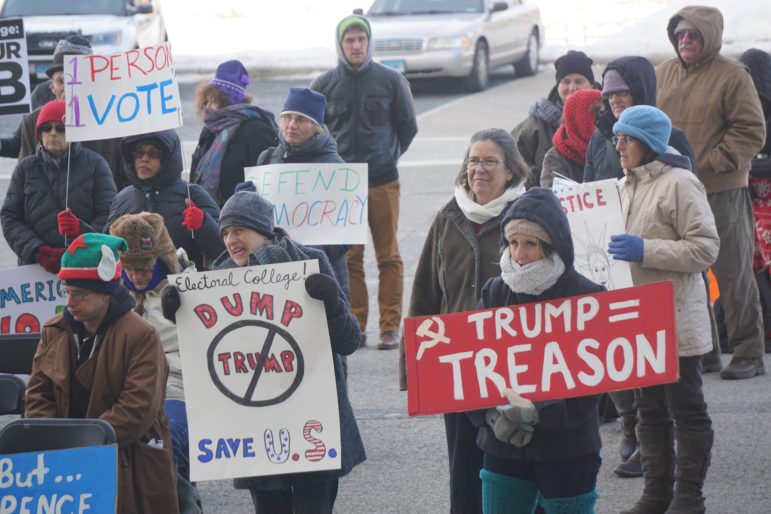 Protesters outside the State Capitol