Washington – Sen. Richard Blumenthal was sworn in to his second six-year term in the U.S. Senate, and all five Democratic House members from Connecticut began a new term as well, as the 115th Congress was gaveled in on Tuesday.

There already are signs this will be another contentious year on Capitol Hill, where the GOP once again controls both the U.S. House of Representatives and the Senate.

House Republicans on Tuesday had to backtrack on a decision to weaken a congressional ethics watchdog after a public outcry that included sharp criticism from President-elect Donald Trump.

There was also a clash between House Republicans and Democrats over a move to fine members who stream or take photos in the chamber or seize control of the floor, an attempt to discourage protests like the one in the last session led by Rep. John Larson, D-1st District, and John Lewis, D-Ga. The Democratic protesters were seeking a vote on gun control legislation after the mass shooting in an Orlando, Fla., nightclub.

Relations between Republicans and Democrats were further strained as GOP leaders in both the House and Senate took the first steps toward repeal of the Affordable Care Act.

Former Arizona Rep. Gabby Giffords, a victim of gun violence and a gun control advocate, was on the House floor in a silent rebuke to GOP leaders for not allowing votes on gun legislation.

Other lines in the sand were drawn.

“If there is an attempt to destroy the guarantee of Medicare, harm [Medicaid], Social Security, or the Affordable Care Act, Democrats will stand our ground,” House Minority Leader Nancy Pelosi said as she ceremoniously handed the gavel to House Speaker Paul Ryan, D-Wis.

But disagreements over policy were masked by the circus atmosphere on Capitol Hill, with family members, including toddlers and infants, allowed for the day on the House and Senate floors and dozens of receptions for new – and some returning – members.

Blumenthal, who was given a ceremonial swearing-in by Vice President Joe Biden, was accompanied by his wife Cynthia and two of his children, Claire and David. He handily won re-election in November by defeating Republican Dan Carter.

“I’m extremely inspired and energized, as I was on the first day of my first term,” Blumenthal said. 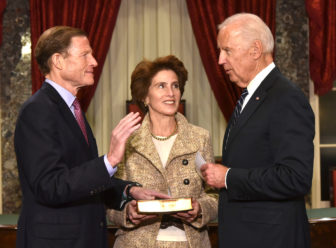 Sen. Richard Blumenthal, left, takes the oath in a ceremonial reenactment of his swearing in with his wife Cynthia and Vice President Joe Biden.

Blumenthal, a member of the Senate Armed Services Committee, was paid a visit by retired Gen. James Mattis, Trump’s choice for secretary of defense, who was making courtesy calls to members of the panel that will hold a confirmation hearing soon, possibly next week.

Blumenthal said he had a “very candid and wide-ranging” discussion with Mattis.

He said the retired Marine Corps general “was very appreciative of the F-35 program,” a program Trump has criticized as too costly, and “had a very clear understanding of the significance of submarines in our national defense.

“We also talked about cyber attacks – particularly by the Russians – the Middle East situation, sexual assaults in the military and other issues,” Blumenthal said.

Besides a favorable vote in the Armed Services Committee and the full Senate, Mattis needs a congressional waiver of a ban on confirming Pentagon chiefs who’ve been retired from the military for fewer than seven years.

Blumenthal said he hasn’t made up his mind whether to vote for the retired general’s confirmation, because of “the importance of civilian candidates for the Defense Department.”

“I haven’t reached a conclusion as yet,” Blumenthal said.

Despite the inauspicious beginning of the 115th Congress, some members, including Rep. Elizabeth Esty, D-5th District, are hoping for bipartisanship and an easing of gridlock.

“There are big challenges ahead of us, but I know that if we put politics aside and work together, there’s no limit to what we can accomplish,” she said.