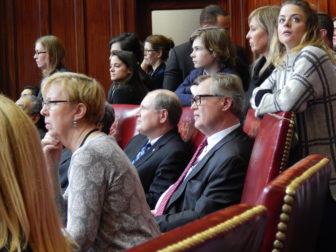 Senators Cathy Osten, Kevin Kelly and Paul Formica on the opening day of the 2017 legislative session.

The leadership team appeared set Wednesday for one of the General Assembly’s most powerful panels, the budget-writing Appropriations Committee.

Sens. Cathy Osten, D-Sprague, and Paul M. Formica, R-East Lyme, will join Rep. Toni E. Walker, D-New Haven, under a new arrangement in 2017 that will see three chairmen of the committee rather than the traditional two.

The final leadership spot will go to Rep. Melissa Ziobron of East Haddam, who returns as the ranking House Republican on the committee.

Osten, who is entering her third term in the Senate, succeeds Sen. Beth Bye, D-West Hartford, who will move into a leadership post on the Higher Education Committee.

Osten brings two important perspectives to her new assignment at a time when state finances are plagued by significant deficit projections.

A retired officer from the Department of Corrections, Osten previously led the union that represents correction officer supervisors. She also is in her fifth term as first selectwoman of the southeastern Connecticut community of Sprague.

“I’m actually excited about this, and I’m really honored,” Osten said, adding she’s optimistic that the committee will not shy away from some difficult discussions about the imposing fiscal challenges facing Connecticut.

Those deficits are driven largely by retirement benefit costs expected to continue surging over the next two decades after more than 70 years of inadequate funding.

“I think we have an opportunity to address these issues right from the beginning,” Osten said. “Whether we acknowledge the mistakes of the past or not, they are there. What matters now is how we deal with it.”

Normally the Senate only would have one chairman’s seat on the committee, with that going to a member of the majority party. The top member of the minority typically is designated the ranking member.

But after Republicans gained seats during the last election, the Senate is deadlocked 17-17 as the session begins.

Leaders of both parties agreed to name two Senate chairs this year, one from each party.

Sen. Rob Kane of Watertown, who was the ranking GOP senator on appropriations last term, would have been the likely choice to become Senate Republican chairman of the committee. But while he won re-election this past November, he resigned Wednesday to accept a post as a state auditor.

“I think having more of a (bipartisan) balance in the House and Senate now is going to lead to a lot more conversations about how we can make government more efficient,” he said.

But Walker, who has been House chairwoman of Appropriations since 2011, is expected to be returned to that post. Walker dropped her bid earlier this year to succeed Aresimowicz as House majority leader to support his choice for that position, Rep. Matt Ritter, D-Hartford.