Senators face a tough session but open with collegiality 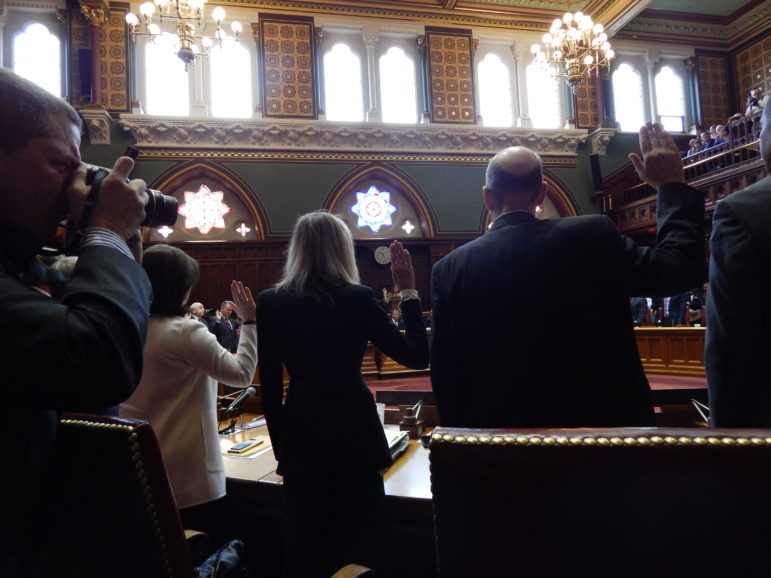 Senators take the oath of office on opening day of the 2017 legislative session. From left are Senators Gayle Slossberg of Milford, Joan Hartley of Waterbury and Joe Markley of Southington.

The state Senate began the 2017 session with two empty seats, pledges of bipartisanship in the evenly divided chamber, and a public-service announcement about organ donation.

And while they will soon be facing the challenge of addressing a projected $1.45 billion budget deficit, the senators’ first morning together was marked by a cooperative tone, liberal use of standing ovations and occasional collegial ribbing, including a couple jokes about Art Linares, the Republican senator newly engaged to a Democratic House member. 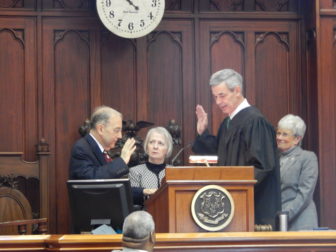 The PSA came from Senate President Pro Tem Martin M. Looney, who received a kidney transplant just two weeks and one day earlier. The longtime friend who donated the kidney, Superior Court Judge Brian T. Fischer, administered the oath of office after Looney was named to his leadership post, and received the day’s first standing ovation from those in the chamber.

“Volunteer live donors like Judge Fischer, like Mayor Dan Drew of Middletown and former East Haven Mayor April Capone, are the heroes in our midst here today,” said Looney, whose kidney damage was the result of medications he took for ankylosing spondylitis, a severe form of arthritis.

He noted there are roughly 120,000 people on the transplant waiting list nationwide. It can take five years or more to receive an organ from a deceased donor. Looney said he was one of approximately 16,000 people who received a kidney transplant last year, “one of the lucky few” – about 5,000 in a given year – who had a compatible living donor. (He urged anyone thinking of becoming a living donor to call the Yale New Haven Transplantation Center, where he had his surgery: 866-925-3897.) 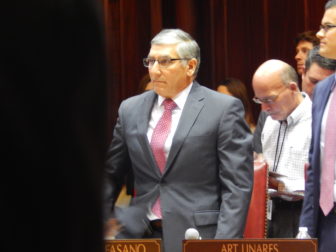 While he remains the top senator, Looney will preside over a chamber with a different power dynamic this term: For the first time since 1893, the chamber has an equal number of Democrats and Republicans.

“With bipartisan power comes bipartisan responsibility and accountability,” Looney, D-New Haven, said during remarks from the dais. “If you have a proposal, bring it to the floor for a vote. Members of both parties should be prepared for this chamber to be a place of intense and robust debate, where the outcome of votes on legislation is not predetermined.”

As part of an agreement between the two caucuses, Republicans will have a larger say in what business comes before the Senate, and each legislative committee will have three chairs: a Senate Democrat and Senate Republican, and House Democrat. Looney’s Republican counterpart, Len Fasano of North Haven, also has a new title: Senate Republican president pro tem. 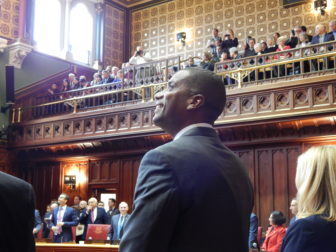 Sen. George Logan of Ansonia, looks up at people in the Senate gallery on opening day of the 2017 legislative session. Logan is one of four new Republican senators.

The power split is the result of a GOP pickup of three seats in the November election, and all four new senators are Republicans: Heather Somers of Groton, George Logan of Ansonia, Craig Miner of Litchfield, and Len Suzio of Meriden.

Democrats maintain an edge in the Senate because Lt. Gov. Nancy Wyman, a Democrat, serves as president of the chamber and can cast a vote in case of a tie.

But Wyman urged the Senators to work together so that remains a rare occurrence. “Our constituents should know that we listen to each other, and while we do not always agree, the majority of bills that come out of the state Senate have always been bipartisan.”

Both Looney and Fasano spoke of their personal relationship and history of working together. Looney mentioned a massive health care law the two senators spearheaded in 2015, which he said has been seen as a national model, and said there would be more bipartisan efforts like that.

Fasano said the agreement on power-sharing was rooted in the friendship he has with Looney, which dates back more than 30 years. He told a story to illustrate their relationship: Less than 24 hours after Looney’s kidney transplant, the two caucuses reached an impasse in their talks on how to run the Senate this session. At the urging of Looney’s chief of staff, Fasano called his Democratic counterpart, and they worked out the issues within five minutes. 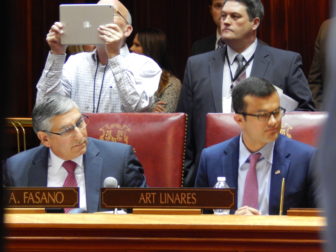 Fasano, meanwhile, called for both short-term and long-term plans to show a commitment to growing jobs and the economy, including by passing legislation designed to reduce burdensome regulations and policies “that scare businesses” and cost jobs. Restoring confidence in the state can help businesses plan for the future and expand, he added. And he called for taking a long-term view when crafting the state budget. 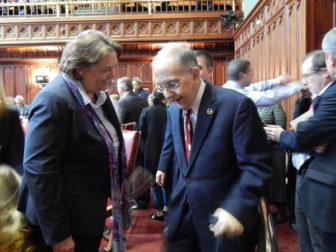 As is usually the case on opening day, there was time spent marking major life events. Fasano recently became a grandfather. Linares, a Westbrook Republican, recently became engaged to Rep. Caroline Simmons, a Democrat from Stamford. “If we can’t get you one way, we’ll get you another way,” Wyman told him. Sen. Carlo Leone, a Stamford Democrat, later welcomed Linares to the Stamford delegation.

Linares says he and Simmons plan on keeping separate residences — and their legislative seats. They have not set a wedding date.

For now, the chamber has 17 members of each party and two empty seats: Democrat Eric Coleman and Republican Rob Kane resigned Wednesday morning rather than take the oath of office, which would make them ineligible to take another job in state government. Kane is expected to be named state auditor, while Coleman hopes to become a judge.