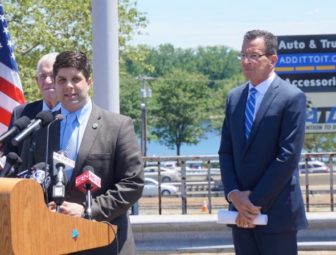 Middletown Mayor Dan Drew became the first Democrat to take a formal step toward running for governor in 2018 by opening an exploratory committee Thursday, a sign not all Democrats will indefinitely wait for their party’s titular leader, Gov. Dannel P. Malloy, to say if he is seeking a third term.

Drew, a three-term mayor who has been on good terms with the administration, announced his exploratory campaign with a statement that some in the governor’s circle saw as an implicit slap at Malloy, Connecticut’s first Democratic governor in a generation.

“For too long, the focus of our government has been to assist people at the very top. The people in the middle are left behind,” Drew said. “We must recognize that we have the opportunity and responsibility to think big and to make bold changes that will tangibly improve the lives of people in Connecticut.”

Drew, 37, follows a small parade of Republicans who have begun raising money for potential statewide campaigns in 2018, but the first Democrat to open fundraising is a sign that at least some in the party are willing to signal they believe there is a good chance the 61-year-old governor has run his last race.

The mayor, who hosted Malloy at a press conference last summer when the governor announced long-term plans to improve Route 9 as its passes between Middletown’s downtown and the Connecticut River, said he made a courtesy call to Malloy about his plans.

“I called him to let him know. He was very courteous and classy. He was very professional. I appreciated the opportunity to speak with him,” Drew said.

Drew said the timing of his move was a reflection of the difficulty in qualifying for public financing in a race for governor, which requires raising $250,000 in contributions of no more than $100 each. Malloy needed 14 months to qualify in 2010, the first year public financing was available to candidates for statewide office.

“This is a long difficult process, and it’s designed to be that way,” Drew said. “The exploratory phase, it gives you the opportunity to take the temperature of party activists and voters. That’s the big reason I’m out there now.”

Roy Occhiogrosso, a top adviser to all three of Malloy’s campaigns for governor — a loss in the Democratic primary in 2006 and his election in 2010 and re-election in 2014 — said Drew is correct about the difficulty of raising $250,000 when limited to small-dollar contributions.

“It is an enormously difficult thing to do,” Occhiogrosso said. “That said, I do think there will be some people upset by some of the things the mayor had to say in his statement. You can say a lot of things about Dan Malloy, but questioning his progressive record is an enormous mistake.”

Malloy is midway through his second term, hobbled by a budget crisis, a 24-percnt approval rating and a Republican Party that just picked up eight seats in the state House and three in the Senate by campaigning against how the state has fared under the governor and the General Assembly’s Democratic majority.

All of that points to forgoing a third term, but Malloy is publicly keeping his options open. In 2014, he won re-election despite beginning the year with only 44 percent of voters saying he deserved another term.

He told reporters Thursday his position is unchanged: He has made no decision about seeking another term. As for Drew, he called him a “a good guy.”

In 1990, U.S. Rep. Bruce Morrison, D-3rd District, suffered for jumping into the race for governor before William A. O’Neill, a Democratic incumbent struggling in the polls, got out of his own accord. In a three-way race with independent Lowell P. Weicker Jr. and Republican John G. Rowland, Morrison struggled to win 20 percent of the vote.

Mike Mandell, the executive director of the Democratic Party, when asked to comment on Drew’s announcement Thursday, delivered a statement that ignored both Drew and the prospects that Malloy will lead the party in 2018.

“As a party, we are squarely focused on re-engaging and re-activating our grassroots network for crucial municipal and special elections this year,” Mandell said. “That said, we will have the necessary infrastructure to mount a strong campaign on the state and federal levels in 2018 and hold the Republicans supporting Donald Trump’s extreme agenda accountable.”