Malloy to attend inaugural as ‘signal we are not going away’ 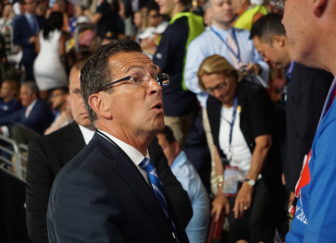 Gov. Dannel P. Malloy, a Democratic supporter of Hillary Clinton from her announcement through the primary season to her defeat on Nov. 8, said Friday he has decided after “much consideration” to attend the inauguration of Donald J. Trump, where he will be seated with other governors.

“While my first inclination was to decline, I’ve decided to accept the invitation,” said Malloy, who also is chairman of the Democratic Governors Association.

A 200-word explanation of the rational for accepting an invitation to witness a presidential inauguration itself is a comment on how little has been routine about the transition from the administration of Barack Obama to Trump, a billionaire developer and reality-TV star who once lived in Greenwich.

Since Trump’s victory, there have been a steady stream of stories about celebrities, A-list and otherwise, who have declined invitations to perform or attend the inauguration. Republican governors opposed to Trump, such as Gov. Charlie Baker of Massachusetts, Larry Hogan of Maryland and John Kasich of Ohio, have come under extra scrutiny.

Baker refused to attend the Republican National Convention in Cleveland, as did the host governor, Kasich. Baker, Hogan and Kasich say they intend to attend the inauguration.

“President-Elect Trump was not the preferred candidate of either myself or the majority of Connecticut voters,” Malloy said. “His conduct during this transition has not assuaged my grave concern that he intends to fundamentally lead this nation in the wrong direction.”

Malloy described his attendance as a measure of quiet defiance, not acquiescence.

“I don’t believe this is the time for compassionate and reasoned voices to shrink away – be they Democrat, Republican, or independent. In fact, the presence of fair-minded people is now more important than ever,” Malloy said. “In the wake of this election and in opposition to many of the president-elect’s recent actions, we are called upon to stand up, dust ourselves off, to be seen, and to be heard.  We should be represented at the inauguration as a signal that we are not going away, and that we are resolved to continue fighting for fairness, equality, and decency.

“For these reasons, I plan to attend the inauguration ceremony and witness the peaceful transference of power from one president to the next – a cornerstone of our democracy.  I understand some may choose differently, and I respect their choice.”