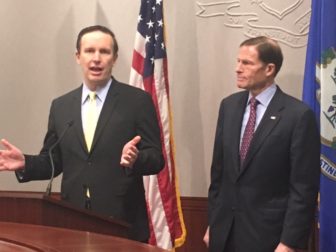 Connecticut’s two U.S. senators, Democrats Richard Blumenthal and Chris Murphy, said Tuesday they will attend the inauguration Friday of Donald J. Trump as an endorsement of the peaceful transfer of power, even as they plan to fight many of the Republican president-elect’s policies and cabinet choices.

“The outrages are coming at such a pace as to obscure the gravity of everything that is happening. There’s too much to talk about at this press conference today,” Murphy said at a stop in Hartford with Blumenthal.

The senators identified a class of nominees they intend to oppose: choices intent on dismantling departments and programs in their purview — a Health and Human Services nominee opposed to the Affordable Care Act, a would-be labor secretary critical of wage and hour laws, and an environmental protection candidate hostile to environmental protection.

“How does that happen?” Blumenthal said.

The senators, who supported Hillary Clinton as superdelegates to the Democratic National Convention, where Murphy addressed delegates in favor of gun control, were measured in their first post-election comments about Trump in November. They now talk about a disastrous presidential transition and coming battles.

“I am ready for this fight, as Chris is,” Blumenthal said.

Murphy faces a potentially awkward moment Tuesday night with the man he succeeded in the U.S. Senate: Joseph I. Lieberman is scheduled to introduce Betsy DeVos, the nominee for education secretary, to the Health, Education, Labor, and Pensions Committee at her confirmation hearing. Tom Price, the nominee for Health and Human Services, is up Wednesday.

“Neither of these nominees square with Connecticut values,” said Murphy, a member of the committee. “Here in Connecticut, we value public education. We understand the importance of public education. We do not have a history of for-profit charter schools like they have in Michigan. And Betsy DeVos has some real questions to answer about why she thinks that the transfer of our public schools to for-profit companies is good for kids.”

Murphy said he resents having to vote on DeVos before she is vetted for potential conflicts of interest.

Lieberman has worked on school choice issues with DeVos, a billionaire supporter of Trump from Michigan. But Democrats for Education Reform, a supporter of the charter school movement, was among the groups signing a letter opposing her confirmation.

Blumenthal said he already has a list of nominees he intends to oppose: U.S. Sen. Jeff Sessions as attorney general; Scott Pruitt, a state attorney general who has repeatedly sued the Environmental Protection Agency, as EPA administrator; and Price at Health and Human Services. He also expects to oppose Andrew Puzder, a burger chain executive accused of violating labor laws, as the labor secretary.

“I will very likely vote against Andrew Puzder, because of his vehement opposition to minimum wage and other labor protections that, again, he will have a responsibility to enforce. It is this principle of essentially trying to destroy the agency they have been nominated to head that I think  runs through the set of nominees that we have. ‘

“I think our lists will overlap,”  Murphy said.

He said he has decided to vote against Sessions, Price, Pruitt, Puzder and Rex Tillerson, the Exxon Mobil chief executive Trump nominated as secretary of state.

“I had a very good meeting with Nikki Haley,” said Muphy, who will review the nomination of the South Carolina governor as ambassador to the United Nations as a member of the Foreign Relations Committee.

Murphy said Price promised him in a meeting that no one in Connecticut will lose health care once the Affordable Care Act is repealed, though he did not say how.

“We still have not seen that secret plan,” he said.

Murphy and Blumenthal both praised Trump’s choices of two retired Marine Corps generals: James Mattis as defense secretary and John Kelly as homeland security secretary. The senators opposed the waiver of the seven-year waiting period before a retired military officer can be defense secretary, but they said they will back Mattis confirmation.

Blumenthal said he will support the confirmation of Elaine Chao as transportation secretary.

On Saturday, both senators will either participate or support the women’s protest march in Washington. Blumenthal and his wife, Cynthia, intend to march with Trump protesters. Murphy and his wife, Cathy, are hosting marchers.

Murphy said his wife plans to march with friends; he expects to be watching their young children.