Hartford rally draws 10,000: ‘Complacency is over’ 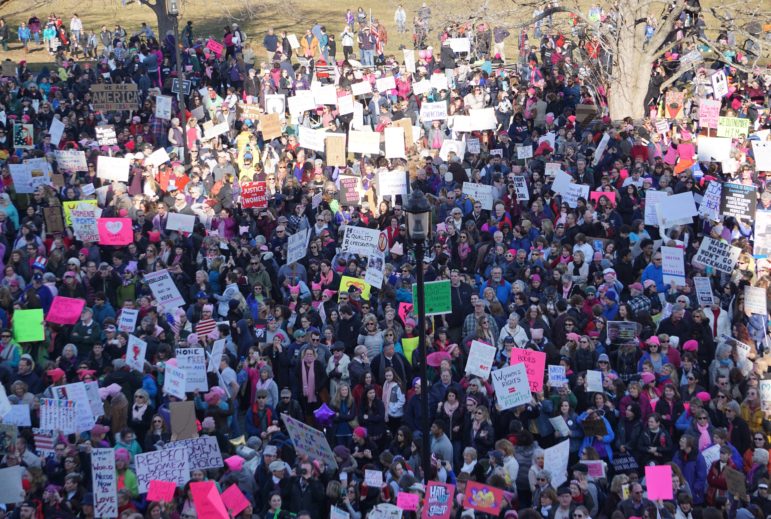 A crowd police estimated at 10,000 in the shadow of the Capitol

Sharlene Kerelejza was awestruck when she looked out at the crowd gathering Saturday outside the north steps of the State Capitol in Hartford, a throng that Capitol Police say reached 10,000.

Kerelejza, the chief organizer of the Women’s March in Hartford, who had seen interest in the rally grow on Facebook in recent days, said what she saw meant one thing: “Hope.”

The event in Hartford was a “sister march” to the national Women’s March in Washington, D.C., which drew an estimated 500,000 people, according to media reports.

These protests were launched to send a message to President Donald J. Trump on his first full day in office, rally organizers said. 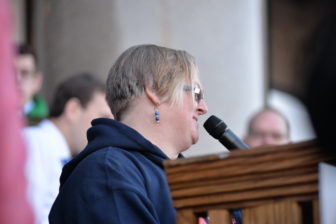 Sharlene Kerelejza, lead organizer of the Women’s March in Hartford

“Complacency is over,” Kerelejza said.

“What we’re looking for is a unified message of no human being left behind,” Kerelejza said. “We all belong.”

The concept of the rally was unveiled shortly after President Trump’s election, but it has evolved dramatically since then around the theme of inclusivity.

The rally was one of the largest in recent years at the State Capitol. The unofficial record goes to the protest of the income tax in 1991 that drew a crowd police estimated at more than 40,000.

Gov. Dannel P. Malloy, one of the speakers who took turns addressing the crowd, said later he suspected that the tone of Trump’s inaugural address helped the turnout in Hartford and elsewhere.

“I think all of the rallies all across the country are bigger than they would have been because of that 15-minute address,” Malloy said.

The rally was scheduled to start at 1 p.m., but people started gathering hours earlier. They filled the space outside the Capitol building and spilled over onto the hillside in Bushnell Park.

At least a dozen elected officials joined with the protesters. Malloy delivered an impassioned speech that received enthusiastic ovations from the crowd. 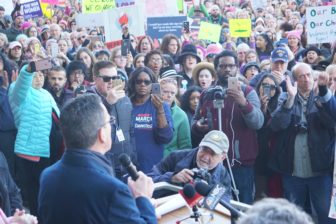 Before Sen. Beth Bye, D-West Hartford, began her speech, she paused for a moment to put on a pink hat knitted by her wife, Tracey Wilson, who is battling cancer. The crowd responded with sustained applause.

Bye decried the results of November’s election, saying Hillary Clinton was “the most qualified candidate ever to run for president.”

“But we’re not going back to sleep, because we’re going to stay woke, people,” Bye said.

State Comptroller Kevin Lembo said he and his husband chose to live in Connecticut because of their desire to be in a community of people like those in attendance at the rally.

“When you go home tonight and reflect on this crazy and wonderful day, know this,” Lembo said. “The rally may be over, but the work continues until the nation’s values reflect Connecticut values.”

Protesters came from across the state to attend the event, though another sister march in Stamford drew a reported 5,000 people.

Liz Vitale and Margaux Hayes were two protesters who had been looking forward to the event.

Vitale, who is from West Hartford, said she came out in support of justice, peace, universal health care and sound environmental policy. But Hayes said she was primarily driven by Trump. 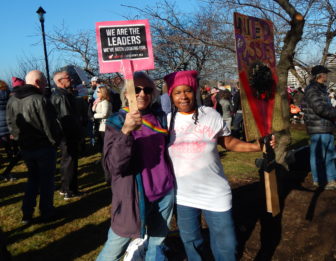 “This presidential candidate – because he will never be my president – is an abomination,” Hayes, a Hartford resident, said.

Hayes said she was glad to see the march grew beyond the initial “women’s march” concept.

“It’s very inclusive,” Hayes said. “Everybody comes out of the womb, and that is inclusive. No questions asked.”

At least one protester in Hartford was planning to be in Washington, D.C., today, but a last-minute conflict kept her in state.

“My husband’s birthday party had to be moved to tonight, so I’m here,” said Tina Manzo, a Wallingford resident.

Manzo said she has been an activist since the 1970s, and showed up at 11:30 a.m. to get her spot near the front of the crowd. She said people have “to stand up” for what they believe in.

When Dejah Beauchamp, a 37-year-old stay-at-home mom from the Higganum section of Haddam, was asked what inspired her to attend the rally, she responded with a question of her own.

“What doesn’t bring me out?” Beauchamp asked. “Everything the Trump administration stands for is the opposite of what I stand for. I just wanted to come out with people who felt the same way.” 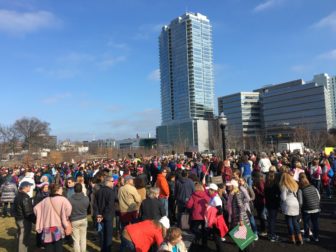 A portion of the crowd at the sister rally in Stamford

Despite the event’s billing as a “women’s march,” there were plenty of men in attendance as well. Ian Adomeit, a junior at the University of Connecticut who majors in environmental engineering, said he contemplated going to Washington, D.C., but decided attending the rally in Hartford would be enough.

“I couldn’t stay silent,” Adomeit said. “There are people who have a lot more to lose than me in this election, and I think it’s my job to stand up and make sure that they don’t lose anything.”

Michael Fitzgerald, a student at Yale who lives in Stratford, made the trip because he thinks these rallies prove to the Trump administration that people are willing to stand up.

“I’m here with my aunt just to show solidarity to the women who feel as if Trump stands in the way of equal rights for everyone,” Fitzgerald said.

Fitzgerald’s aunt, Lindsey Miller, stood next to him with her 6-month-old child, Vivienne, in her arms. Miller, a Shelton resident, said she would have brought her two sons along, too, if they weren’t “so rambunctious.”

She said the rally shows “women’s power” while promoting “equality for everybody.”

“There’s acceptance for everyone,” Miller said. “I know a lot of women who have felt oppressed during this election process, have felt scared. And when the outcome of the election happened, it was almost like, well, hey, 50 percent of the country thinks talking about sexual harassment is no big deal. I think that this show of so many people being here is saying, ‘You know what? It is a big deal.’”

Correction: Sen. Beth Bye’s wife, Tracey Wilson, was in attendance at the rally in Hartford. An editing error in a previous version incorrectly stated she was not. 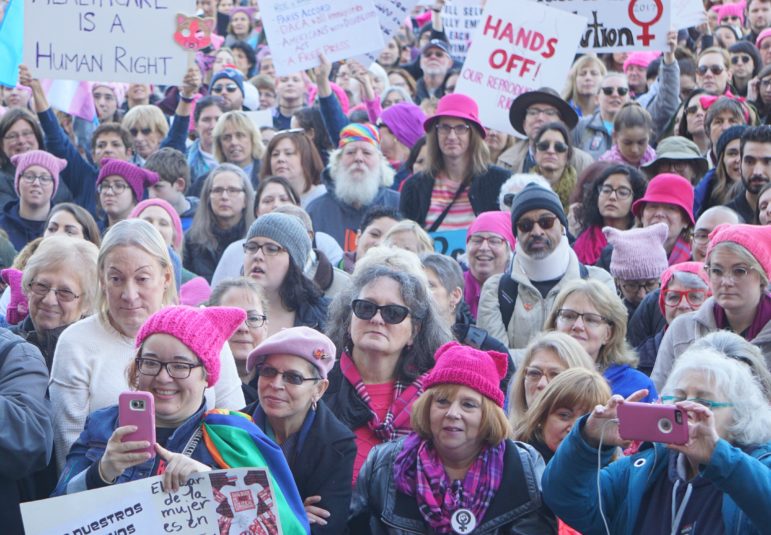 A protest in pink.