A political debut generates a buzz in Hartford 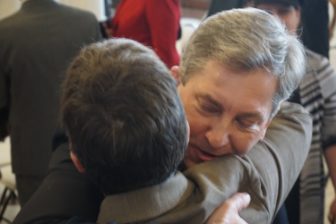 Scott Bates took office as Connecticut’s deputy secretary of the state Tuesday in a ceremony that marked him as man who just might have some statewide political ambitions.

The job is not high profile or a traditional springboard to elective office. But Bates was sworn in by Secretary of the State Denise Merrill in front of an audience, as she noted, composed of “many dignitaries, both foreign and domestic.”

Gov. Dannel P. Malloy was there in the north lobby of the State Capitol. So was Lt. Gov. Nancy Wyman, Attorney General George Jepsen, Senate Majority Leader Bob Duff, Sen. Ted Kennedy Jr., and various Democratic Party officials and friends from eastern Connecticut, where Bates grew up. He lives in Stonington with his wife, Lisa Tepper Bates, and their 10-year-old son, Jake.

Also in the audience: Diplomats from Kosovo who came to see the man who taught a class on democracy 15 years ago in one of his overseas assignments.

“One is deputy chief of the Kosovo mission. The other is consul general in New York,” Bates said after the ceremony. “They believed in our democracy. We have doubts now, right, as we should. Americans are great at reinventing and renewing, and that’s what we’re in the middle of doing right now. But the world still looks to us.” 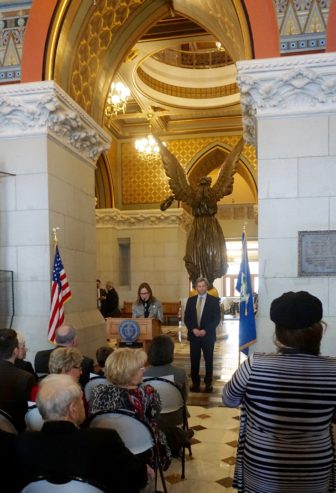 Secretary of the State Denise Merrill and her new deputy, Scott Bates.

Bates, a lawyer, has been a congressional chief of staff, a senior policy aide on homeland security, and the secretary of the commonwealth and legislative director in Virginia under former Gov. Douglas Wilder. His work on homeland security and nation-building has taken him to war zones in Iraq, Afghanistan, Kosovo and Bosnia.

He also is a member of the Democratic State Central Committee who briefly addressed the panel in June after delegates were apportioned among supporters of Hillary Clinton and Bernie Sanders. He sent them home that night with a final thought not taught in nation-building school: “Let’s go forward together and kick Donald Trump’s ass.”

It was not to be.

With a young son at home, Bates said he is happy to stop his globe-trotting and circumspect on his own political ambitions.

“I think it’s the greatest opportunity in the world to do this job,” Bates said. “All you can do in life is have the chance to make a difference. So right now at this moment in time I’ve been given the opportunity, and that’s all I can do.”

His friends in the audience shrugged when asked what his next step might be. A few said they ask themselves the same question. The next statewide election is in 2018. Bates said at 35, his life was planned. Now, at 50, not so much.

“I know what I’m doing for the next two years. I’m doing this job and I love it,” he said.

His wife is the executive director of the Connecticut Coalition to End Homelessness, whose offices are a five-minute walk from the State Capitol.

“Tomorrow, we’re driving in together,” he said.