Little Derby has a big plan 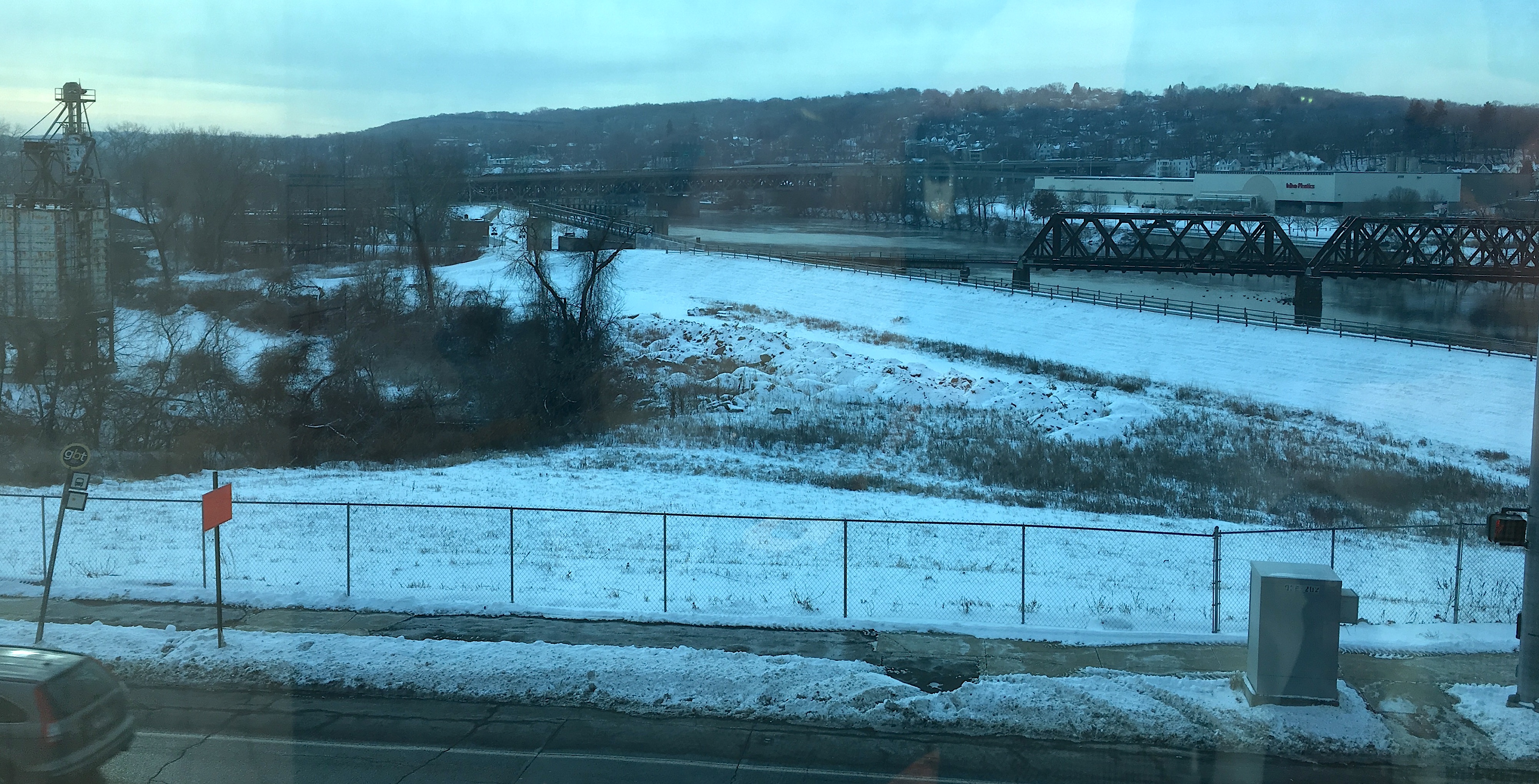 The Derby development site as seen from the mayor’s window, with an old grain elevator at left

In the frenzy of urban renewal that followed World War II, it was almost axiomatic that vast swaths of city fabric had to be leveled in order to be recreated. Thus went Hartford’s East Side, New Haven’s Oak Street and others among the state’s urban neighborhoods.

In time, many cities came to regret demolishing so much of their architectural and social heritage, sometimes with little to show for it. The practice of clear-cutting neighborhoods began to die out, but slowly. One of the last municipalities seduced by this approach was Derby.

In 2003 the city demolished a row of 19th century brick buildings along Main Street to make way for a major development. That project never happened, leaving a vacant 19-acre site with little more than a rusting grain elevator — kind of a landmark — that once was used to store birdseed. Derby is the state’s smallest geographical city, with just over five square miles of land, so 19 acres is not insignificant. 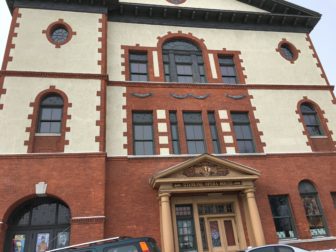 The Sterling Opera House, which is on the National Register of Historic Places

After a dozen yeas of inactivity — the empty lot is right across the street from City Hall and easily visible from the mayor’s second-floor window — city officials started over, bringing in a planning firm known for “new urbanism” — planning the kinds of buildings and neighborhoods that the city tore down.

Did they have it right the first time? The Derby project, called “Downtown Now!,” is an example of how thinking has changed in the efforts to revive cities.

Derby is nine miles northwest of New Haven at the confluence of the Housatonic and Naugatuck rivers, in a valley that once was an industrial (and high school football) powerhouse and now is trying to reinvent itself, with varying degrees of success.

As with many of the state’s once-vibrant older cities, industries left, retail struggled and the compact downtowns along the Naugatuck River went into a long decline in the latter part of the last century. By century’s end in Derby, the 19th century brick buildings on the south side of Main Street were abandoned and decaying. The town acquired more than a dozen of them via tax foreclosure. Officials decided to demolish them, against the strong advice of the Connecticut Trust for Historic Preservation and others.

New Haven-based writer Philip Langdon, who writes nationally about planning and design issues, excoriated the demolition decision in a Hartford Courant commentary titled “Drop the Demolition, Derby.” He said the city was repeating the mistakes of the 1960s, exhibiting “the flawed thinking of the urban-renewal era.”

The 19th century buildings were still standing then, and Langdon pleaded for a stay of execution: “Their details are still worth admiring: giant brackets, stone lintels, terracotta decoration, roundheaded windows, elaborate cornices – an encyclopedia of styling on a street that you can walk … in five minutes.

“Buildings of this sort … are the stuff of which wonderful historic districts are made,” he wrote. 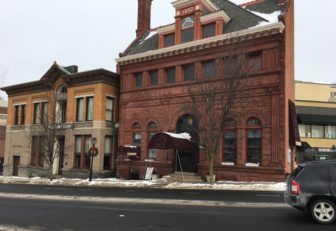 Buildings on the north side of Derby’s Main Street that were not demolished add charm to the downtown.

Alas, there would be no exposed brick loft apartments, funky restaurants, cool shops, studios. Town officials said the buildings were too far gone to preserve, and swung the ball. They named a developer who was going to build as many as 750 units of housing and possibly a big box store. Residents didn’t like the plan. It, and other proposals, fell through.

Connecticut’s heavy reliance on the property tax to fund local government puts a major strain on municipalities that don’t have much taxable property. This is at the core of the challenges facing Hartford and Bridgeport, but also some of the state’s smaller cities.

Not only is Derby tiny to begin with, but about a fifth of its 5.4-square-mile area is city or state parkland and thus not taxable. Its tax rate of nearly 40 mills is in the range of municipalities such as New London, Manchester, Meriden and Norwich. “Our residents carry too much of the burden,” said Derby Mayor Anita Dugatto.

Dugatto, a dentist who owns her downtown office building, became the city’s first female mayor when she was elected in 2013.  She comes across as bright, sensible and focused on goals, one of which is to bring development to empty downtown land. She targeted the Main Street site and got a $445,000 grant from the state to take another look at the largely vacant swath.

The city selected the Miami-based planning and design firm DPZ , from 11 applicants, to lead the process. DPZ was begun in 1980 by the husband and wife team of Andres Duany and Elizabeth Plater-Zyberk, who were part of a coterie of young designers who came out of the Yale School of Architecture in the early 1970s and created the “new urbanism” movement – a push for lively, walkable neighborhoods and cities built in the spirit of traditional urban design.

They designed the town of Seaside, Fla., among hundreds of new urbanist projects here and abroad, and wrote the influential book “Suburban Nation,” about the problems with sprawl and ways to address it.

Dugatto promised to take a new approach to developing the downtown site, and did so in several respects:

There are challenges. The site has multiple property owners, municipal and private, which may slow things down, but Creane said the project can be built incrementally. There’s also a wastewater treatment plant just south of the development site, which is good for sewer capacity but not for scenery or olfactory enjoyment. Dugatto said there are discussions about regionalizing this service. 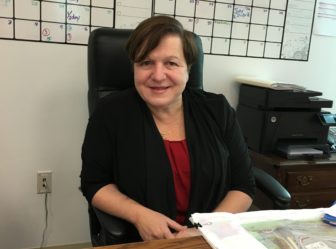 The goal, said Dugatto, is a neighborhood “that is beautiful to look at, comfortable to walk through, safe and friendly — a place that will put Derby on the map.”

Though DPZ still is putting the final touches on the plan, the city already is talking to several interested developers, said Lynn DiGiovanni, who is managing the project for the city. While she said it was premature to name the developers, she characterized their interest as “very serious.”

She said the city still has to complete street and parcel plans for the site and change the zoning, and said the goal is to have these steps completed by the end of summer, and then ask for proposals. “We don’t want to lose the momentum.”

For more than a decade, the state and nonprofits such as the Connecticut Main Street Center and the Partnership for Strong Communities have tried to counter decades of relentless suburban sprawl with the notion of “smart growth,” building housing and retail in town centers and transit corridors. Derby is one of dozens of communities to embrace the idea.

It turns out that Millennials and many empty-nesters like living in downtowns. A marketing study that was part of Downtown Now! found 119,000 Millennials living within a 15-mile radius of Derby.

Gov. Dannel P. Malloy, who as mayor of Stamford described I-95 as a “parking lot,” put state money behind transit-oriented development, and many towns, from Old Saybrook to South Norwalk, have responded. The coming of commuter rail on the Hartford-Springfield line has spurred TOD in Wallingford, Meriden and other communities. The state is making improvements to the Waterbury Branch Line, adding passing sidings so commuter trains can pass one another on the single-track line, which should accrue to Derby’s benefit.

That Derby is playing the cards it was dealt — relying on its unique assets — is another evolution in thinking. Many cities and towns across the country tried to copy successful projects from other cities (see Baltimore’s Inner Harbor), and learned that they don’t often replicate well. Successful projects such as Blue Back Square in West Hartford, Storrs Center in Mansfield and Middletown’s Main Street revival respond to local conditions and may not work elsewhere.

Finally, form-based zoning is a way to sensibly expedite development. The focus on the physical form of buildings encourages attractive streetscapes and helps development by making projects more predictable and less administratively cumbersome. Simsbury recently created a form-based code for the former Hartford Insurance Group property, and a New Jersey developer bought the concept and the property.

Perhaps someday, tiny municipalities such as Derby will merge with neighboring towns to take advantage of economies of scale. But since such change is not imminent in the land of near-sacred home rule, bringing more dense development to town centers makes perfect sense. “Derby is on the cusp of really exciting development,” said Creane.

New housing across the river in Shelton