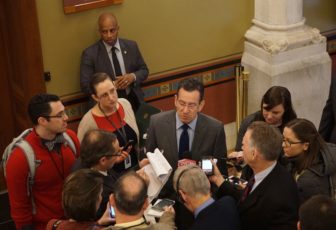 Gov. Dannel P. Malloy expressed frustration Tuesday that members of the legislature’s budget-writing committee voted not to recommend a plan he says paves the way for the state’s child welfare agency to finally rid itself of federal court supervision.

That plan – which commits the state to maintain spending of $800 million annually on the Department of Children and Families even as the state faces major red ink – is expected to be voted on by the General Assembly next week. The Appropriations Committee voted 31 to 7 Monday not to recommend it.

DCF has been overseen by a federal court for more than 25 years because of a lawsuit – the “Juan F.” case – that documented shortcomings in care for abused and neglected children.

Asked if he intends to withdraw the plan given the real possibility it might be rejected by the General Assembly, the Democratic governor told reporters he’s not considering it.

“Nope. No. I think it is important that the courts know what Connecticut wants. I want to get out from court supervision. I want to concentrate on the points that we have not done as well on,” he said.

“I think it was a mistake,” Malloy said of the Appropriations Committee vote, “and no, I am not pulling it.”

Department of Children and Families

Source: Department of Children and Families

It is now up to the leaders of each chamber to decide whether to vote on the plan. If no vote is taken before Feb. 6, the plan that was negotiated and agreed upon by the plaintiffs in the longstanding Juan F. case goes into effect.

“This idea that we are overfunding DCF when we’ve actually reduced spending in DCF – as well as other parts of state government in tandem – I think is a fallacy. It’s intentionally ignoring what has been accomplished,” Malloy said.

While DCF’s budget was cut significantly between fiscal 2009 and 2013, legislators have more recently shielded the agency from deep cuts imposed on other agencies, and DCF’s budget has rebounded since 2013. During Malloy’s first year in office in 2011, DCF’s spent $808.3 million, according to the state comptroller’s annual report. This fiscal year, the agency is on pace to receive $794.2 million, a 1.7 percent reduction.

Malloy pointed to the approach the department has been taking to end the practice of placing foster children out of state or in large-group homes run by shift workers and reducing the number of children incarcerated.

“We are making those changes,” Malloy said. “We are capable of doing that, but we need to have the tools in place, so for a limited period of time, let’s concentrate on those things and get those things done and get out from supervision and continue to make the kind of progress that we have already made.”

But locking in DCF’s $800 million budget – 5 percent of the state’s operating budget – leaves many legislators uneasy.

On Monday DCF Commissioner Joettte Katz said she believed that she would be able to exit court supervision within one year, with one additional year of specific self-monitoring and reporting, if the deal were approved.

But she also said she was well aware of the gamble she was asking legislators to take by committing to not cutting DCF’s budget and promising certain caseloads.

“Technically speaking, we’re talking as long as it takes. My expectation is two years,” she told the panel.