CT gets good news for now on its EPA grants 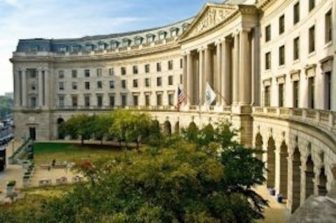 Since the freeze was first reported Monday by the Huffington Post, along with a multi-agency gag order, DEEP has been trying to get clarification from EPA regarding the status of its many funding sources from the agency.

DEEP Commissioner Rob Klee said the EPA’s New England regional office confirmed DEEP would continue to receive funds for the two largest blocks of funding it receives. One is for the Clean Water State Revolving Fund, which funds wastewater treatment projects. The other is for the Performance Partnership Grant, used to implement and enforce programs related to federal laws such as the Clean Water and Clean Air acts.

Calling the initial announcement “vague and unclear,” Klee said: “It was a surprise to us, and frankly probably all commissioners in all states.”

He said the fate of the remaining funds for a host of programs is not known.

“We don’t fully understand where it might impact brownfields, or grants with our municipal partners or other sorts of things, so there’s still a lot we don’t know,” he said. “But at least those two big slugs are currently still moving.”

An EPA spokesman said the agency didn’t expect any impact or delay associated with EPA grants to DEEP. The agency reiterated an earlier statement that it was   reviewing grants and contracts information with the incoming transition team.

“The agency is continuing to award the environmental program grants and state revolving loan fund grants to the states and tribes; and we are working to quickly address issues related to other categories of grants,” EPA said. The agency said its goal was to complete its review by the close of business Friday.

Of the $31 million, $16 million is for the Clean Water Fund and $10 million is the Performance Partnership Grant. The remaining $5 million goes to a number of programs related to brownfields, air monitoring, Long Island Sound, underground storage tanks, various types of pollution control and more.

Further complicating the funding future is the problem of the overall federal budget. Congress passed a short-term budget, known as a continuing resolution, that runs until April 28. The federal fiscal year runs through Sept. 30. That means the federal budget will be up for review in just a few months.

It was widely reported that EPA had been ordered to remove its climate change website page, but the agency reversed course late Wednesday after outcries from the science community, media, educational institutions, states and others.

Klee said the possibility that EPA and Energy Department data used by the state and other entities such as utilities use – greenhouse gas emission inventories for example – might no longer be available concerned him too.

“We will push back to the extent it’s impacting our ability to protect human health and the environment,” he said, echoing a memo he sent out to DEEP staff the day Scott Pruitt was nominated to be EPA chief.