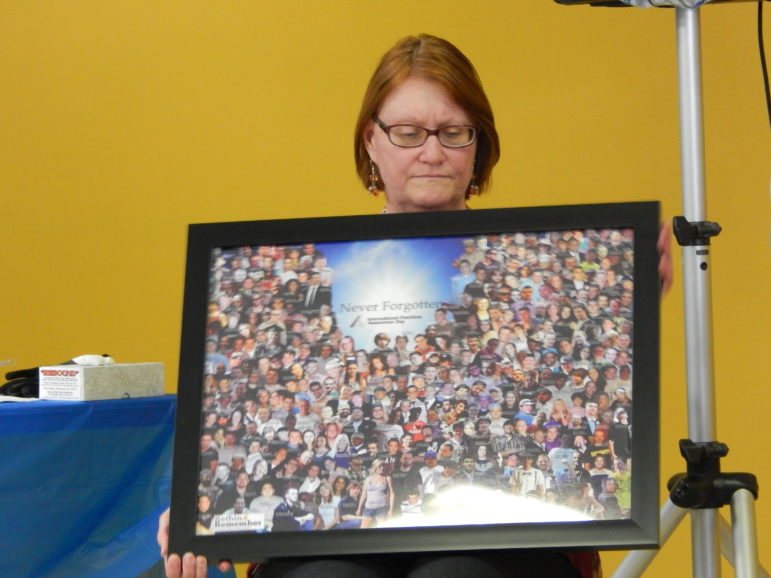 Karen Zaorski of Wolcott, whose 26-year-old son Raymond died from a cocaine overdose, holds a collage of pictures of people who died from drug use. She spoke during an event with state officials Thursday at Toivo by Advocacy Unlimited, a Hartford center that provides classes and activities focused on wellness.

Gov. Dannel P. Malloy Thursday announced a series of legislative proposals intended to prevent opioid addiction and overdoses, including requiring physicians to prescribe opioids electronically rather than on paper; allowing visiting nurses to destroy unused medication; and allowing patients to add directives to their medical files indicating that they don’t want to be prescribed an opioid medication.

The proposals, which Malloy announced at an event for families of people who died from drug use, also include requiring doctors to provide information about the risk of addiction when prescribing opioids, and removing legal restrictions that can prevent state agencies from sharing information that could help track trends and how resources are being used.

“Connecticut is trying to lead on this issue. We’re probably, undoubtedly, not doing enough, but we always look for ways to do more,” Malloy said. He spoke at an event to launch a remembrance quilt for people who died from drug use, with squares created by their loved ones. Two mothers whose young adult children overdosed on drugs spoke before the governor.

The rise of prescription opioid and heroin use has drawn considerable attention from lawmakers in recent years, and many legislators have listed it as among their top priorities this session. In 2015 729 people died from accidental overdoses. Officials expect that number will be closer to 900 in 2016, Department of Mental Health and Addiction Services Commissioner Miriam Delphin-Rittmon said.

Legislators have introduced a wide range of bills related to opioids and drug use. They include measures to increase inpatient drug treatment beds, limit the prescribing of opioids, increase criminal penalties for people who possess heroin or sell drugs that cause another person to die from an overdose, and require insurance companies to cover long-term addiction treatment.

Rep. Sean Scanlon, who played a major role in that legislation, said the focus at the time was “stopping this from getting worse.”

“Now I think it’s our job, if we have stemmed the bleeding so to speak, to make sure that we’re caring for the individual that currently is addicted to opioids,” he said earlier this week.

Scanlon, who co-chairs the Insurance and Real Estate Committee, said that includes proposals intended to make sure people can get appropriate treatment for addiction, including 30-day treatment in facilities if needed.

“There’s no one-size-fits-all approach to getting treatment for an opioid addiction or a substance use disorder,” he said.

Malloy described his proposals as building on efforts in past years to take on the opioid epidemic, which he said involves both the misuse of prescription drugs and heroin that is far purer and cheaper than in the past. 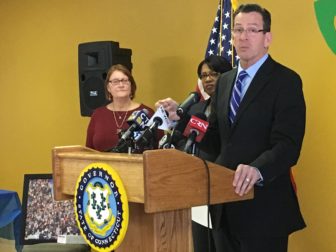 Gov. Dannel P. Malloy announces proposals to combat the opioid epidemic. He stands with Miriam Delphin-Rittmon, center, commissioner of the Department of Mental Health and Addiction Services, and Karen Zaorski, whose son died of a cocaine overdose.

Some of Malloy’s proposals are intended to reduce the supply of prescription opioids. Federal data indicate that more than half of those who misuse prescription painkillers got them from a friend or relative.

Currently, only the person prescribed a medication or a legal caregiver can dispose of that person’s unused medications. Malloy’s proposal would allow registered nurses from home health care agencies to do so as well.

The governor said electronic prescriptions are easier to trace than paper, and banning the use of paper prescriptions for opioids would make it harder for doctors to prescribe massive amounts of opioids unnoticed.

“We all know there are even greater budget challenges this year, but services to help those with drug addictions cannot be slashed as they were in the past,” Fasano, R-North Haven, said. “These core services need to be made a priority, and I hope to see the imperative to combat opioid abuse also reflected in the governor’s budget proposal next month.”

Ken Ferrucci, senior vice president of government affairs for the Connecticut State Medical Society, said the organization will work with the governor’s office on the proposals, but wants to ensure that doctors who don’t already electronically prescribe have the resources to convert.

It’s important, he added, to ensure that policymakers don’t confuse opioids with addiction. Making it harder for people to get prescription painkillers could lead a person to use heroin if their underlying pain or other issues aren’t addressed, he said. And Ferrucci said the availability of addiction treatment options remains a problem.

“They’re just not there,” he said.

Keith Stover, a lobbyist for the Connecticut Association of Health Plans, said insurance companies are happy to work with those looking for solutions.

“We’ve been actively engaged in this and are very, very willing to be a part of any of the conversations folks are having, particularly any rational conversation about where there are friction points regarding coverage,” he said.

“There’s good work happening, but it’s not coordinated,” she said.

Lang has other items on her wish-list too: a uniform way for first responders to report when they use the drug naloxone to reverse an opioid overdose; a public awareness campaign to make people aware that anyone can get naloxone from a pharmacist; and having schools begin drug-prevention efforts earlier, using evidence-based models.