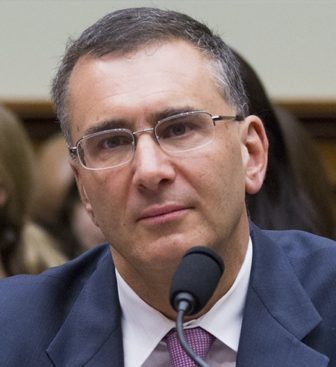 Jonathan Gruber:  “I don’t think they will have a replacement anytime soon.”

The Massachusetts Institute of Technology heath care economist once caused a sensation by saying the approval of the ACA depended on “the stupidity of the American voter,” because they would not be aware that some of the health care’s taxes on insurers would be passed along to their customers in the form of higher premiums.

Gruber apologized for his comments before the House Oversight Committee for “making a series of glib, thoughtless, and sometimes downright insulting comments.”

President Donald Trump says he wants to replace the ACA with “good coverage at much less cost” and give Americans “a much better healthcare plan at much less money.”

Congressional Republicans have yet to come up with a timetable for repealing the law or a plan to replace it. Gruber said it may be  politically  impossible for the GOP to craft a plan that would provide as much health insurance coverage as the ACA.

At a Republican retreat in Philadelphia this week, GOP lawmakers decided to extend the deadline for a new plan – set initially for the end of the month – until March.

While they don’t  have a replacement plan yet, Republicans have released trial balloons as to what a new health law may look like, saying it could include subsidized high-risk pools to cover those with pre-existing conditions and tax breaks to help lower-income Americans get coverage.

In an interview with the Connecticut Mirror, Gruber spoke of the challenges the GOP faces.

CTMIRROR: Trump’s first controversial executive order had to do with the repeal of the Affordable Care Act, but there doesn’t seem to be an understanding of what it does, if anything. What do you think?

GRUBER: It’s not entirely clear. It’s really more a statement of principle than a statement of actual action. It’s sort of just say  “‘Gee, I don’t like the ACA,” but it doesn’t really do anything. The more important steps are yet to come.

CTMIRROR: What can the president do through executive order to repeal the ACA, doesn’t most of it require legislation by Congress?

He can tell the IRS not to enforce (the tax penalties.) It’s a terrible thing to have a law and a president who tells people he’s not going to enforce it.

CTMIRROR: What do you think Congress can do to repeal and replace the ACA?

GRUBER: I honestly don’t know. I go back and forth and until last week I thought Congress had to repeal it, they had gone so far down that road before. But then the Congressional Budget Office said there would be 32 million uninsured, which made lawmakers stand up and notice. That was a pretty negative assessment and they are not going to have a replacement anytime soon.

I honestly don’t know what happens. But I don’t think they will have a replacement anytime soon. Already the insurance markets are shaky….

Insurers need to know, insurers have to know one way or the other by spring. If it’s not resolved one way or another, insurers will step out [of state exchanges] and the system will start to collapse. As it stands right now, I think a number of insurers will get out and that could lead to significant erosion in the exchanges.

CTMIRROR: Do you think congressional Republicans are hoping the insurers take down the ACA so they won’t be blamed for a rise in uninsured.

GRUBER: They could say “It wasn’t us, it was the insurers because Obamacare didn’t work.”

If you had asked me that question six months ago, I would have said “Oh, they would never use that strategy.” But in a world where so many Americans voted for Donald Trump, I don’t know what isn’t possible anymore.

So it’s tough for the insurers…

CTMIRROR: Could some of the things posed by House Speaker Paul Ryan – setting up subsidized high risk pools and offering new tax breaks — work as a replacement to the ACA?.

GRUBER: No, it wouldn’t for the following reason.

What Ryan always does is try to ignore basic mathematics. High risk pools are a bad solution and would only work if the government puts billions of dollars into the high-risk pools. And he’s not talking about paying for that. So in principle you can do what he says. But in practice, if you do the math, it will end up costing more than the ACA. It’s not a solution. It’s a well-meaning set of talking points, but it’s not a solution.

I don’t see a way out of this, if they don’t want a rash of uninsured and skyrocketing insurance premiums.

In a world of rational politics, I don’t see a way out either. But in a post-Trump world, who knows? Who knows they may blame the people uninsured on Obama. Or they may say “The facts are wrong, people are insured.” We’re in a post-fact place where the old rules don’t apply any more.

CTMIRROR: Should President Obama have looked at a different model than the one he did in fashioning the ACA?

GRUBER: Obama looked at all different models and did the most he could under the political circumstances.