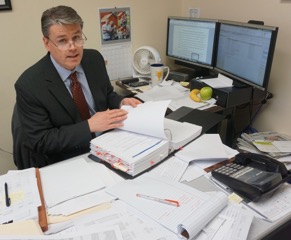 Joe Nielsen and Mike Cole, antitrust lawyers from the Connecticut attorney general’s office, waited for colleagues from nearly three dozen states to settle into a chilly conference room at the Hotel Kabuki in San Francisco’s Japantown. No one was admitted without signing a pledge not to divulge what Nielsen was about to share.

It was late September. Their boss, Attorney General George Jepsen, was preparing to sue a half-dozen drug companies, alleging price fixing on two generic drugs, an antibiotic and a diabetes medication. But his office suspected fraud on a broader, nearly unimaginable scale.

Prices on 1,200 generics had jumped an average of 448 percent from July 2013 to July 2014, the month Connecticut opened its investigation on suspicions by Cole, who supervises 13 lawyers and four investigators in the state’s antitrust and fraud unit. The cost to consumers and health insurers was staggering.

Now, at an antitrust conference sponsored by NAAG, the National Association of Attorneys General, Connecticut was looking for help in advancing an investigation Nielsen had largely conducted himself, following a trail of suspiciously cozy communications from one drug company to another.

The lights dimmed, and Nielsen began projecting images of evidence gathered over two years about how prices were set in the $75 billion generic drug industry. For 90 minutes, he shared phone records, emails and text messages Connecticut obtained by subpoena.

Some of the lawyers congregated at the back of the room. Cole feared they were leaving, ready to sneak out for dinner after a long day of meetings. But Cole realized the room had no heat, a likely consequence of an ongoing, advertised $25 million renovation to update the tired Kabuki. The lawyers weren’t bored, just tired and cold.

When the lights came up, they gave Nielsen a standing ovation.

Connecticut filed suit in U.S. District Court in Hartford on Dec. 15 — joined by 19 other states who had lawyers in the room at the Hotel Kabuki, attended a subsequent show-and-tell in Hartford or otherwise were drawn to the case that promises to become the next big thing in multi-state litigation by state attorneys general.

Six weeks later, 40 states have signed on, new subpoenas are going out, and the investigation is growing beyond the companies named in the suit. From his office in Hartford, Nielsen is sharing evidence with colleagues around the country on a secure document-sharing platform based in Ohio.

The rise of state attorneys general

By banding together — most times on a non-partisan basis, other times not — state attorneys general routinely take the lead on what once was left to private class-action lawsuits, individual states or the U.S. Department of Justice.

The lawsuits can complement DOJ cases. Within days of its initial subpoenas in the drug case — publicly traded targets disclosed the receipt of the demands for documents — federal criminal investigators reached out to Cole and gladly accepted leads.

Or they can fill a vacuum, as when Jepsen stepped into a space vacated by the feds after the inauguration of President Trump. With the backing of 16 other attorneys general, Jepsen asked a federal appeals court Monday to grant them intervenor status in a case that could decide whether the Consumer Financial Protection Bureau retains a measure of autonomy, led by a single director who serves a five-year term and can be fired by a president only for cause.

The Obama administration was contesting a divided appellate court ruling that essentially rendered the director an at-will employee, contrary to what Congress intended in the Dodd-Frank reforms passed in response to the financial collapse of 2008.

Jepsen’s filing quoted media reports that Trump has indicated a desire to fire the director and possibly gut the financial protection bureau.

“Given the position of the president-elect and the new administration,” Jepsen’s office wrote in a motion drafted before Trump’s inauguration, “it is urgent that the State Attorneys General intervene in order to protect the interests of their States and their States’ citizens in an independent CFPB.”

Jepsen, the president of the National Association of Attorneys General, circulated the motion to every member. The only ones who signed on were Democrats.

“Some of the multi-state actions are partisan, yes,” Jepsen said in an interview. “I expect, as Trump follows through as he appears to be with his campaign promises, you’ll see a lot of activity among Democratic attorneys general.”

One potential target of multi-state litigation is a current member of NAAG, the Republican attorney general of Oklahoma and Trump’s nominee to head the Environmental Protection Agency, Scott Pruitt.

A skeptic of human-caused climate change, Pruitt has repeatedly questioned the necessity and efficacy of clean water and clean air laws and regulation as attorney general, setting up a conflict with Democratic attorneys general.  In a public statement after his nomination, Pruitt said, “The American people are tired of seeing billions of dollars drained from our economy due to unnecessary EPA regulations.”

Jepsen said state attorneys general have long broken on partisan issues without harming their ability to work together on non-partisan issues.

“That shouldn’t obscure the fact that throughout it all we maintained positive bipartisan relationships at the national level,” Jepsen said.

He pointed to the recent multi-state settlement with Moody’s, one of the credit-rating agencies accused of misleading investors about the quality of relatively exotic investments known as residential mortgage-backed securities and collateralized debt obligations, a factor in the financial collapse of 2008.

It arose from a lawsuit originated by Connecticut in 2010 under Jepsen’s predecessor, Attorney General Richard Blumenthal, now a U.S. senator. The $864 million settlement involved 20 states and the Department of Justice and produced $31.5 million for Connecticut.

Jepsen, 62, a graduate of Harvard’s law school and its Kennedy School of Government, is only Connecticut’s third elected attorney general since the office became full-time after the election of Joseph I. Lieberman in 1982. Jepsen was elected in 2010, re-elected in 2014 and is expected to seek a third term in 2018.

He said Connecticut tends to “punch above its weight” in multi-state lawsuits.  He credits Cole and his staff with devising the legal strategy that led to a price-fixing case against the publishers of electronic books.

“We can play. You don’t need to be New York or Texas or California to do this stuff,” Cole said. “You have to know how to do your craft.”

Aaron Bayer has seen the development of state attorneys general into a coherent legal and regulatory force from the perspective of the pursuer and the pursued.

He was the deputy attorney general under Blumenthal and now is a litigation partner at Wiggin & Dana, where one of his jobs is to advise clients how to respond to state and federal investigations.

“In the evolution of state attorneys general multi-state actions, they have become more common, more sophisticated and well-coordinated over time,” Bayer said. “I don’t think any company wants to be the subject of a multi-state.”

An investigation by a single investigator in a small state can quickly blossom into a national monster. All that is needed is a reasonable cause to inquire, a low legal standard.

A news story and an email opens investigation

In the case of the pricing of generic drugs, the reasonable cause was a just-posted New York Times story Cole read at home on a summer’s evening about curious price increases imposed by makers of digoxin, one of the oldest known heart medicines, and other generic drugs.

The story by Elisabeth Rosenthal was headlined “Rapid Price Increases for Some Generic Drugs Catch Users by Surprise.” As soon as he finished the story, Cole emailed it without comment to Nielsen at 9:10 p.m. on July 8, 2014. No direction was necessary. 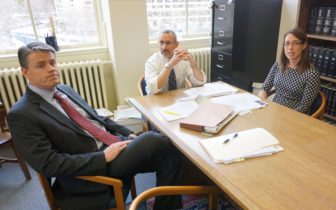 Mike Cole, head of the antitrust and fraud unit, flanked by Joe Nielsen and Laura Martella.

Some quick research found an odd pattern. Four companies had been in the market before the price increases. Two dropped out, a new one entered the market and the remaining two raised their prices, Nielsen said, “exactly the same amount, to the same price point.”

Cole got permission to open an investigation on July 10. The first subpoenas went out by the end of the week, and their receipt by their publicly traded targets was disclosed July 15, drawing inquiries from the industry press and the Justice Department.

Details of the investigation remain confidential. With Jepsen’s permission, Cole outlined a broad timeline, saying that in early 2015, after six months of solo work by Nielsen, the office obtained text messages from Heritage Pharmaceuticals that “took the investigation to a new level.” The company is one of the six defendants in the Connecticut lawsuit.

The messages obtained from Heritage were among competitors. Only heavily redacted versions were quoted in the version of the lawsuit that is public, but Jepsen called them “mind-boggling.”

Some of the material was shared with the Department of Justice, which had been in contact with Cole and Nielsen. Four months after Connecticut’s first subpoena went out, the feds convened a grand jury in Philadelphia, apparently chosen for proximity to the industry. About 40 generic drug makers can be found between New York City and Philly.

By last summer, Cole saw the need for more help, both the resources to look deeper into the evidence of price-fixing and the muscle that would be necessary to eventually open settlement talks. Corporations generally talk settlements only if a universal, multi-state resolution is possible.

In early fall, Cole arranged for Laura Martella, an assistant attorney general working on a case against RBS Securities, to shift to the drug investigation as soon as she was available.  RBS was about to agree to a $120 million settlement over its handling of mortgage-backed securities.

And on Sept 28, 2016, Cole and Nielsen met their colleagues at the Hotel Kabuki, presenting each with a confidentiality agreement to sign as the price of admission to Nielsen’s show and tell.

Nielsen shared the text messages and other evidence, projecting them on a screen in a presentation that began at 5 p.m. and ran through 7:30 p.m. The beginnings of a small working group fell into place. It had been 26 months since Cole sent an email to Nielsen. Connecticut no longer was working alone.

Digoxin, the drug at the center of the story that originally caught Cole’s attention, was not part of the lawsuit. But the investigation, Cole said, is continuing.